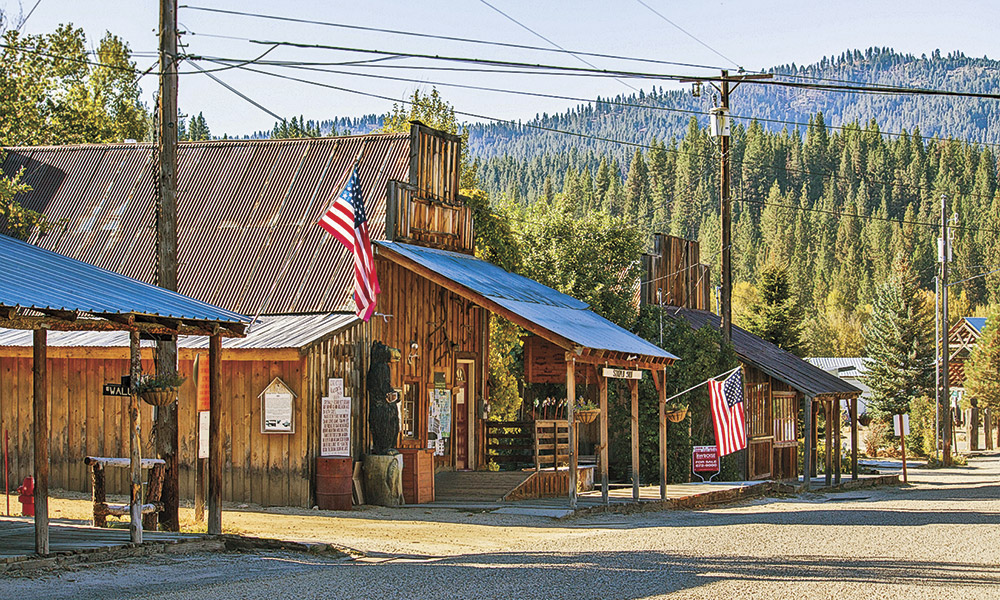 In 1862, the Boise Basin roared to life with a red-hot case of gold fever. Miners poured in and Idaho City and other towns sprouted. By the following year, its population had grown to 6,000, the Territory’s largest, and included the frontier’s usual assortment of unwashed drifters, cold-eyed thieves and pistol enthusiasts.

“The saloons went almost door to door because the miners had nothing else to do,” says Chetleen Heckathorn, curator at the Boise Basin Museum. “It was the real Wild West, but few heard about us because we didn’t have famous names like Deadwood and Tombstone.”

The boom petered out by the late 1860s, but the town endured, and today Idaho City is a great example of a tiny community, population 463, that honors its past and showcases it for visitors.

The Boise Basin Museum, located in the 1867 post office, features four rooms of artifacts, including photos, guns, scales to weigh gold and a blackjack table. A video explains efforts by the Idaho City Historical Foundation to preserve and restore historic buildings in the so-called Queen of the Gold Camps.

These include the Galbreaith House, Judge Holley House and the Pon Yam House. Pon Yam was an herbalist and merchant who used the building between 1867 and 1885. When the gold boom ended, Chinese immigrants—1,751 strong in the 1870 census—contributed mightily to the town’s economic fortunes.

These houses are only open to the public at certain times. The Galbreaith and Holley houses are furnished in the fashion of the day and visitors can peer in the windows. Renovators are still working on the Pon Yam House, but panels of historical information show through the windows.

Idaho City’s historic district includes 15 important buildings, including the 1871 Boise County Courthouse, originally a general store. Still a functioning courthouse, it has half-ton folding iron doors that were made in San Francisco, shipped up the Columbia River and carried overland by horse and ox teams, according to the county’s website.

The original clerk’s desk is there as well. It folds up so it could be put on a wagon and taken to wherever the circuit judge was holding court. In 1897, Judge George Stewart sentenced murderer Herman St. Clair to be hanged, and for reasons no one quite understands, wrote his order in the wood in the bottom of the middle drawer of his desk. Stewart’s desk is there, his death decree still visible.

Boise County conducts its current business in the building across the street, built in 1865 and still referred to by its last saloon name, the Miners’ Exchange. Visitors can see the original bar and back bar, which today’s County Commissioners use as a desk during public meetings.

“A lot of visitors say, ‘Wow, I didn’t know all of this was here,’” says Joyce Obland, president of the Boise Basin Interpretive Association. “Some books classify us as a ghost town, but we’re all living here and our buildings are still being used.”

She recommends stopping at the visitor center to buy a brochure for the self-guided Bricks & Boardwalk Tour, which includes the wooden sidewalk along Main Street.

On the tour is Diamond Lil’s Steakhouse & Saloon, a rustic watering hole that displays antiques, photos and a large collection of pre-1928 paper money laminated on the bar and elsewhere. The Idaho City Trading Post sells a variety of jewelry, shirts and souvenirs, and don’t Miss Trudy’s Kitchen, where Trudy Jackson serves the best huckleberry cheesecake anywhere.

For a fun, out-of-town trip, drive gravel-topped Centerville Road 13 miles to Placerville. The former gold rush town has a museum housed inside the old Boise Basin Mercantile, its shelves stocked with period items.

To plan your visit, start at the Idaho City Chamber of Commerce building at 201 Main Street.

To pamper yourself in a beautiful setting, visit The Springs. The modern facility features live music and a fine café. Get a backrub, take a steam or soak in a pool fed by a natural hot spring.

See grave markers on 40 timbered acres. Of the first 200 souls buried there, only 28 died of natural causes. See the marker for John N. Moore. To escape an embarrassing scrape in California, he went by the alias J. Marion More. By the time of his death in 1868, he’d become a prominent Idaho City leader. Mores Creek is named for him.

See the cell blocks and gallows at the penitentiary in Boise, 36 miles away. An extensive exhibit shows medieval arms and armor, Revolutionary War firearms and swords, Civil War items and an 1883 Gatling Gun on its original carriage. The penitentiary opened in 1872.