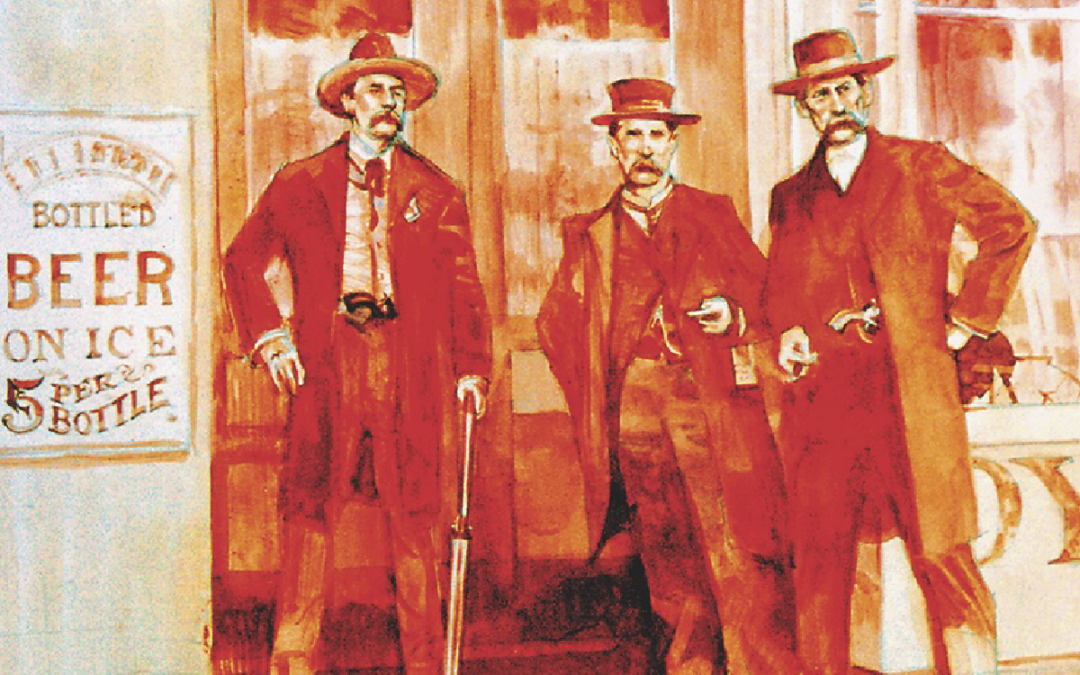 I’ve read the transcript of Wyatt Earp’s testimony at the inquest following the gunfight at (near) the O.K. Corral, and it seems he drew his gun from a coat pocket when the shooting started. Why would a professional lawman do that?

None of the Earp brothers were wearing holsters that day. Had they been riding out to some ranch to make an arrest, they would have strapped on gun belts, but they could be cumbersome to wear in town. It wasn’t uncommon for men to carry their pistols in their trousers or coat pockets, or even to stick them in the waist of their trousers.

Some men lined the pockets of their coats to keep their smoke wagons from getting hung up.

Are you familiar with Australian outlaw Ned Kelly?

Ned Kelly is Australia’s answer to America’s Jesse James. Ned, the oldest son, got into crime at a young age, as did his brothers. He hooked up with a notorious bushranger named Henry Power, who became his mentor. As an adult, Kelly became a horse thief, train robber and a murderer. But to some, then and now, he became a Robin Hood figure, fighting to help the downtrodden. The gunfight with police that he’s best known for was in June 1880 at the Glenrowan railway station during an attempted train robbery. He wore homemade armor—but was wounded 28 times. He was hanged on November 11, 1880.

Is it true that the term “cowboys” was first used during the American Revolution?

Most likely, the term “cowboys” comes from the British light horse battalion under the command of Col. James De Lancey. The name was given to them by American soldiers and farmers, as a battalion often rounded up cattle for the British in their raids. One might say they were America’s first cattle rustlers. The term was not a compliment.

Did the Indian tribes experience crimes such as theft, robbery and murder committed by and against tribe members? If so, how were they handled?

Traditionally, there were many differences in the way justice was handled within the tribe. It usually depended on the seriousness of the crime. Some tribes, for example, allowed the victim’s family to hand out the punishment. Others were decided by tribal consensus. Authority for decision-making was grounded in the wider social group, and approval to pursue any course of actions against offensive behavior was achieved through tribal consensus. Tribes throughout the United States have continued to rely on certain aspects of their traditional practices for administering justice.

Should we really consider Billy the Kid an outlaw?

Billy was a livestock thief, and ranchers considered livestock an asset, same as money—they were sometimes called “hairy greenbacks.” Also, he took part in the killings of four Lincoln County lawmen. I’d say that qualifies him as an outlaw.

Does any film, however short, exist of Wyatt Earp?

Wyatt never appeared on the silver screen. It was suggested he appeared in a group scene in the 1916 film The Half Breed starring Douglas Fairbanks, but Wyatt Earp scholar Jeff Morey slowed down the scene and determined the character wasn’t Wyatt.