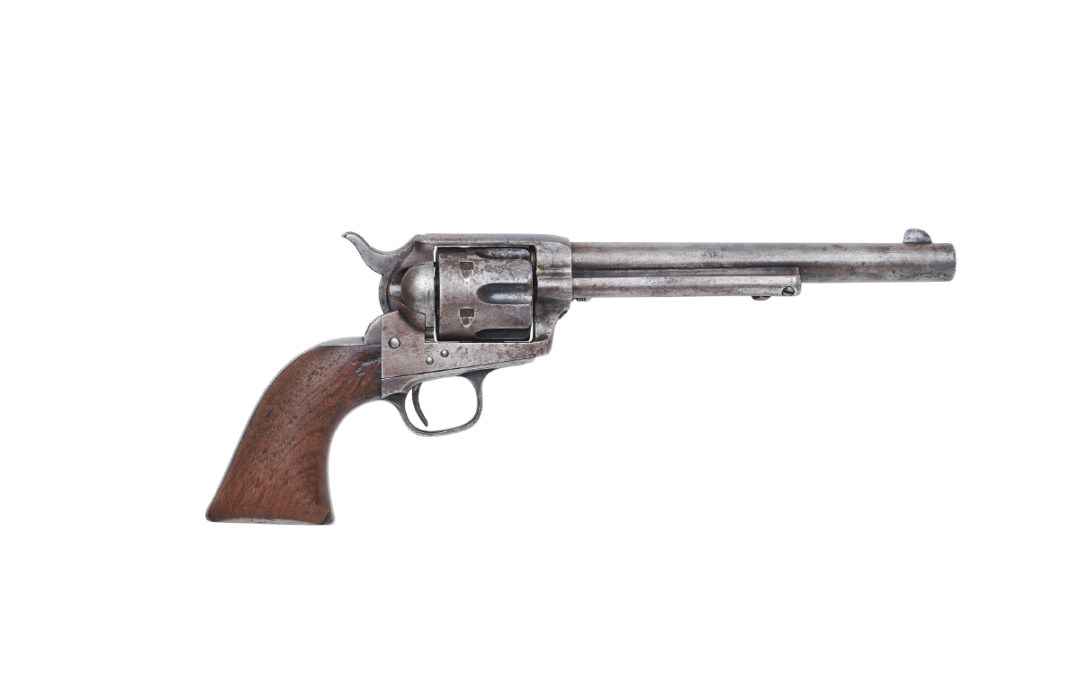 In the fall of 1880, Sheriff-elect Pat Garrett was given his marching orders by the cattle king of New Mexico, John Chisum: “Clean out that squad east of Sumner.” On December 23, Garrett and a motley crew of Texas cowboys had surrounded a rock house at Stinking Spring, New Mexico, in the freezing dark, and as the sun came up, they coldly shot down the first person who walked out the door. It turned out to be Charlie Bowdre and not the Kid. Garrett’s posse had already shot and killed another of Billy’s pards, Tom Folliard, back in Fort Sumner. With the death of Bowdre, two of the Kid’s gang were toast. After a long standoff, everyone inside eventually surrendered and gave up their arms. They included Billy the Kid, Dirty Dave Rudabaugh, Tom Pickett and Billy Wilson. At some point Pat Garrett took a liking to Billy Wilson’s Winchester and pistol, and like lawmen had been doing for a long time, he purloined these two guns for his own use.

Beaver Smith ended up with the Kid’s Winchester, Frank Stewart was gifted the Kid’s horse by Billy himself and the young outlaw is reported to have given his pistol to the mail carrier’s brother Mike Cosgrove.

As a side note, after a standoff in Las Vegas, New Mexico, on December 27, Garrett delivered his prisoners to the Santa Fe jail, where the Kid spent three months before being tried in Mesilla and sentenced to hang. While in the jail, a reporter asked him what he thought about getting as famous as Buffalo Bill, and the Kid replied, “There’s no money in it.”

So, how do we know, 141 years later, that the gun that recently sold for over $6 million is this same gun?

And, more importantly, what does Pancho Villa  have to do with this whole story?

And, finally, who would pay that kind of money for a gun, even if it turns out it is the actual gun that killed the Kid? 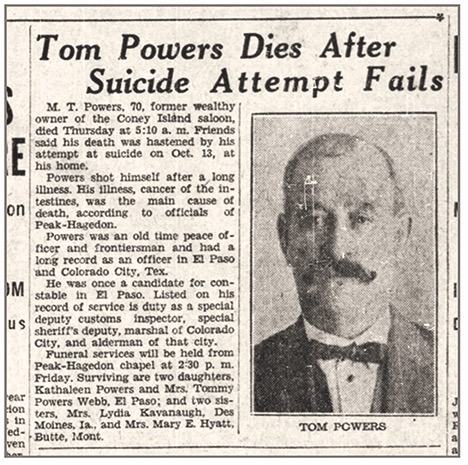 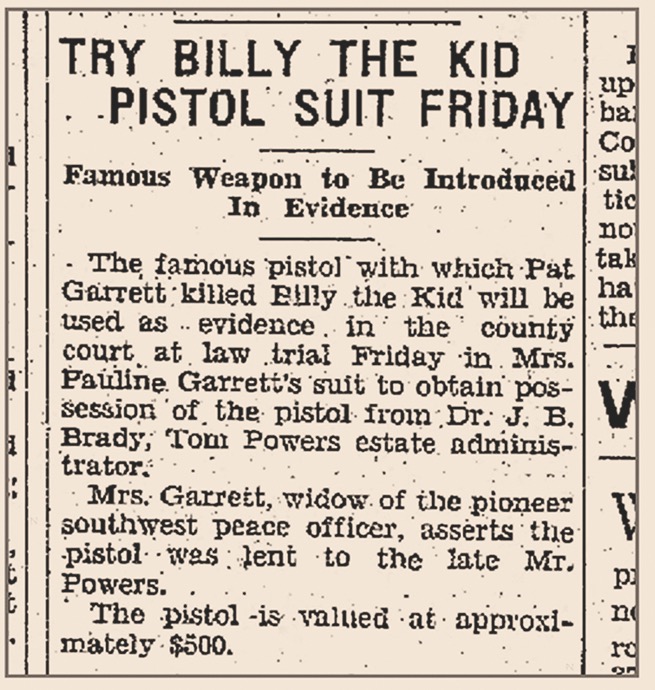 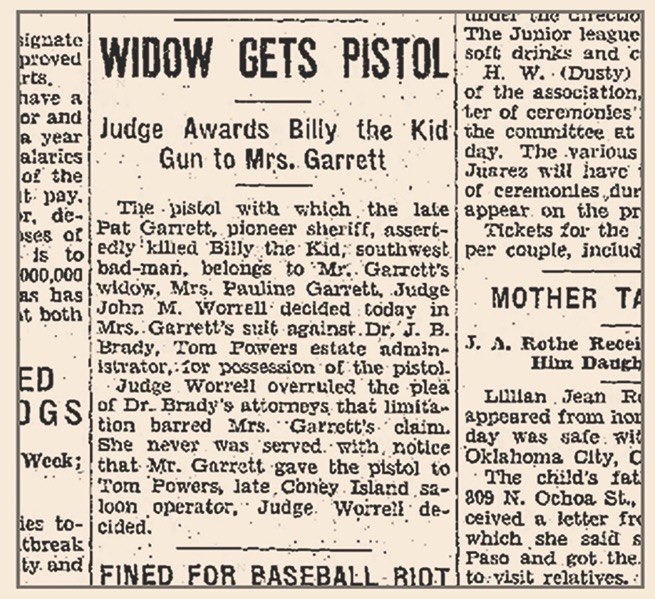 The Facts Behind the Gun that Killed the Kid

• In the early ’80s—that would be the 1980s—I was in a small cafe-saloon in Goldfield, Nevada, and behind the bar on the wall was a nondescript pistol, and under it was a sign that said, “This is the ONLY gun in the West that did not kill Billy the Kid.”

• Sometimes it seems like there are enough Billy the Kid guns to arm an Army regiment. They show up everywhere and often. During a debate about all this in the 1930s, a newspaper reported there were at least 50 guns that claimed to be the killer of the Kid.

• Pat Garrett rode the fame of killing the Kid all the way to the White House. In 1901 he was called to Washington and got the job as Customs Inspector in El Paso, Texas. It was the top of the roller coaster for the old lawman. But the Rough Riders Reunion in San Antonio, in 1905, did him in when Garrett introduced his friend Tom Powers as a “cattleman,” when Powers was a “saloon man,” an occupation Garrett didn’t want the president to know about because there were suspicions about Pat’s drinking issues. Of course, after the Texas newspapers ran this item, then corrected Garrett, the president felt like a “chump” and Garrett wasn’t reinstated.

• Pat Garrett drank more, lost money and asked for a loan from the same Tom Powers who owned The Coney Island Saloon in El Paso, Texas. Powers was then loaned the gun for display, or he took it as collateral, or he flat out bought it. Powers had a signed agreement with Pat’s signature and the serial number on the pistol.

• And then the story went dark. The Kid was forgotten, and nobody cared about the pistol or what it meant. Then a strange set of circumstances changed everything. In 1915, the United States supported Vestuciano Carranza, and a crime reporter from Chicago covered the attack on Columbus, New Mexico, by Pancho Villa. Later, that same intrepid reporter went to El Paso and decided to go to the Coney Island Saloon for a beer. While enjoying his brew he asked the bartender what the significance of the pistol behind the bar was. The result: the reporter Walter Noble Burns published The Saga of Billy the Kid in 1924, and suddenly The Kid was back on
the map.

• In October 1930, Tom Powers, rich, despondent and riddled with cancer, shot himself in the heart at his house on Wyoming Street in El Paso. Incredibly, Powers lived for three months and died in January
of 1931.

• Widowed and poor in the middle of a national Depression, Mrs. Pat Garrett sued the Powers estate to return the gun. The Powers estate claimed the gun was payment for bad debt and not a loan, and they had the paperwork to prove it. The case went all the way to the Texas Supreme Court. The court sided with a lower appellate court that stated Pat couldn’t have signed over the gun without his wife’s consent, and on October 7, 1934, Apolinaria Garrett stood on the front porch of her modest Las Cruces, New Mexico, home holding the returned Colt. She was comforted by the fact that someone told her it could be worth as much as $500.

• Two weeks later, after riding in the Roswell, New Mexico, parade as the grand marshal, Mrs. Pat Garrett died and the valuable pistol is kept in the family until 1983, when Jarvis Garrett sells it to a collector, who then sells it to Jim and Theresa Earle of College Station, Texas. Jim also bought the Wilson Winchester. It is believed that Jim paid in the ballpark of $45,000 to $150,000 for the gun. With the passing of Jim Earle, the daughters put it up for auction at Bonhams, where it sold for over $6 million. I would say it has very solid provenance as being the actual pistol that killed the Kid.

Who Bought the Gun?

Now, as for the question of who would have paid that price? It is a bit of a mystery because during the Bonham auction the buyer was on the phone and he requested his name not be used. Now everyone in our history world has one suspect in mind, the one who we think has the ponies and the motive to pull this off. And I think if you watch our video of an event at the Denver Merchandise Mart from 2010, you might recognize who that would be.

And, by the way, we HOPE he did buy the pistol because then both the only known photo AND the pistol belong to the same person. Someone we know cares about preserving the history of the
Wild West.

Author’s Note: I want to thank Samuel K. Dolan for the fabulous newspaper clippings from El Paso, Mark Lee Gardner,  for his research on this piece, and James B. Mills.