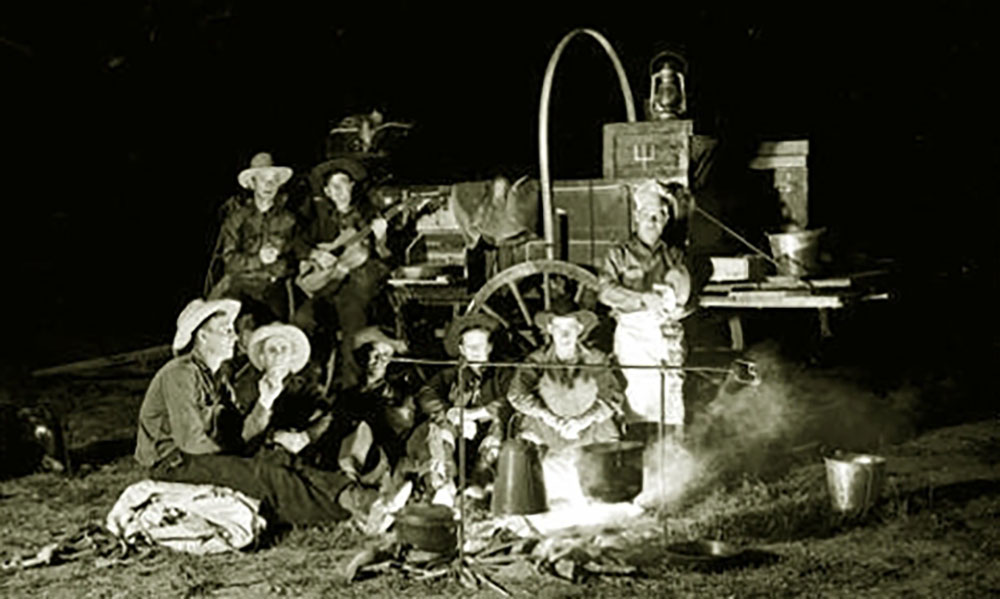 One of the West’s earliest cattle drives occurred in 1854 when a cattleman named Tom Ponting drove a herd all the way from Texas to New York City. After the Civil War, Joseph McCoy pioneered the idea of taking them to Kansas and shipping by rail to Kansas City and Chicago.

Prior to the Civil War Texas cattle were mostly for local consumption and the marketable exports were hides and tallow.

Cattle drives during the post-Civil War years were mostly about bringing beeves worth about $4 a head from the home range in Texas and taking them to a point of sale where they might bring $40 a head.

Herefords were introduced to Texas in 1876 and in the next few years replaced longhorns as the major range breed.

The number of cowboys on a cattle drive depended on the size of the herd. A small herd might number 500 head up to several thousand. The biggest to ever hit the trail was a herd of 15,000 that was brought up the trail from Texas in 1869. Two years later another
about the same size made the trek.

“Woke up one mornin’ on the Old Chisholm Trail, rope in my hand and a cow by the tail…..” The trail from various parts of south Texas to Kansas was about 600 miles and encountering no problems could be covered in 3-4 weeks but six weeks was most common considering all the hazards along the way.

The outfit normally numbered about a dozen men including the trail boss, cook, wrangler and cowhands. On the drive three men rode drag at the rear of the herd, two rode flank, two rode swing and two more rode point, at the front of the herd. The two flankers closer
to the point were the swing men. The veterans rode point and flank while the younger cowboys rode drag.

Riding drag meant breathing in a lot of dust and that was the least favorite. Usually the more-inexperienced cowboys rode drag but sometimes the cowboys would take turns at the various positions so each would have the throat-choking pleasure of riding drag. The
chuck wagon and trail boss rode in the lead. The herd was moved along casually so as to not lose too much weight and they’d usually make about 10-12 miles in a day. If the grass was good the cattle would grow fatter on the rich grass as they moved north.

Pay was about a dollar a day and found (grub). The lowly wrangler got less and the trail boss was paid about $100 a month. The cook, who wielded subtle but enormous power in the outfit could earn up to four times the pay as the regular hands but he was usually
paid something in between the trail boss and the cow hands.

The boys crawled out of their bedrolls at five and had breakfast. They broke for lunch around noon and had supper around sundown after the herd had been secured. The men working night herd, using the Big Dipper as it rotated around the North Star for a time piece, had two-hour watches beginning at 10 P.M. with the last one at 4 A.M. when the daily routine began all over again. Usually two men rode night herd during each two-hour watch, riding in opposite circles around the herd.

The chuckwagon tongue was always pointed at towards the North Star so that when they pulled out in the early morning they were still headed in the right direction. Red Stegall wrote a song, “The Wagon Tongue,” that tells the story about driving cattle on the Plains where there were no landmarks, mountains or trees to keep the cowboys pointing the herd north so when the stars came out the cocinero (cook) would point the wagon towards the North Star.

Besides hauling the grub, the chuck wagon carried everything from a coffee grinder, and water barrel to a tool box and bedrolls. The usual diet for the cowhands consisted of plenty of beans, salt pork, coffee, dried apples and an occasional beef steak. A creative cook was worth his weight in gold.