Red Hot for the Crowd 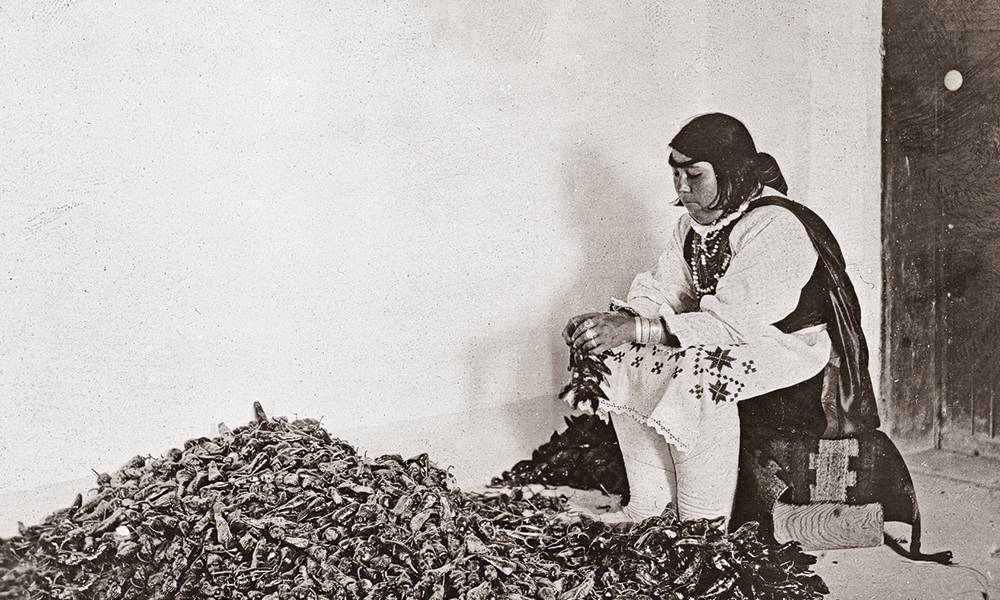 In 1879, when the Atchison, Topeka and Santa Fe chugged into Las Vegas, New Mexico Territory, the railroad brought in a wide variety of food that rivaled the delicacies found in the California streets of San Francisco.

Playing off recipes developed by local Mexican natives, the Exchange hotel offered a regional dish of Chile Colorado in 1882, which The Las Vegas Gazette described as “…nothing more or less than stewed red peppers.”

But the Exchange’s chef, Paul Crawford, made his Chile Colorado more spicy than stew. Before the meal was over, he had to cool down his customers by bringing them “…an armful of fans and seventeen buckets of ice water. Oh! he made it red hot for the whole crowd.”

Locals who wanted to make their own Chile Colorado could find chile peppers sold by Las Vegas merchants, or by Pueblo Indians at outdoor markets.

Or cooks could find the spice already prepared, at stores that included Weil and Graaf’s, which advertised 5,000 pounds of ground chili for sale. Perhaps not so coincidentally, a milk ad appeared before that promotion!

Prepare the red-hot native Mexican dish of Chile Colorado for dinner; you might need to have some fans nearby!

Season the chicken with salt, and then coat with flour. Sear on all sides until golden over medium-high heat in a large stew pot. Reduce the heat to simmer. Add the parsley, onion and enough water to cover chicken. Cook covered until the chicken is done—about 60 to 90 minutes.

While chicken is cooking, make the sauce: Cut the tops off the chiles, and dump out seeds. Cut into rough pieces, and place in a bowl. Add boiling water, just to cover; let stand for 30 minutes. Drain half the water, and blend the chiles and remaining water until smooth. Add to the chicken, and finish cooking.