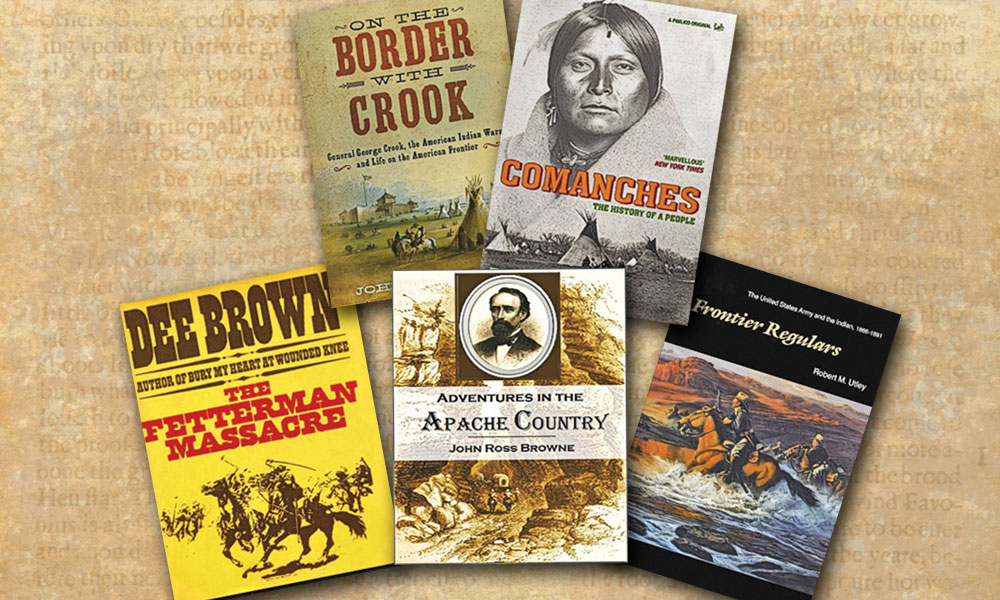 He’s had six Western novels published: Canyon of the Dead, Death Wears a Star, Death Song, The Arizona Kid, Shadow Man and The Peacemaker. All are presently available. Ralph Cotton, a Pulitzer-prize nominated novelist says: “This relatively new author has thoroughly, and rightly so, claimed his place among the top Old West storytellers.” Shadow Man has been described as “a little masterpiece waiting for you to turn the page.”

McBride, who lives in Brighton, England, says, “Picking just five books to recommend is an impossible task, given the range of subject matter encompassed under the headline “The Old West.” Ask me in ten minutes and I’d pick another five, and ten minutes later another five.”

1. On The Border with Crook (John G. Bourke, Time Life Books): This is an on-the-spot account by one of Gen. George Crook’s officers in the 3rd U.S. Cavalry. It takes in when Crook fought Apaches in Arizona, 1871-’75 and 1882-’86, and also the campaigns against the Sioux and Cheyenne in 1875-’76, including the Battle of the Rosebud. It’s an invaluable record by someone who was there.

2. The Fetterman Massacre (Dee Brown, Pan Books Ltd): By the author of Bury My Heart at Wounded Knee, this is an almost day-by-day, diary-like account of Gen. Carrington’s ill-fated expedition of 1866, from the founding of Fort Phil Kearny to the massacre of Fetterman and his men by the Sioux and Cheyenne. Brown details the unfolding of a tragedy with the skill of a master dramatist.

3. Apache Country (John Ross Browne, Leisure Books): A little lost gem, this is a first-person account of a journey through the Southwest in 1863-’64, through communities living in fear of Apache attack. A unique account of daily life on one of the most “frontier” of all American frontiers.

4. Comanches (T.R. Fehrenbach, Book Club Associates, London): In contrast, this is history on a massive scale, following the Comanche tribe from their origins as an offshoot of the Shoshones in Wyoming, through their years as “Lords of the South Plains” in Texas to their eventual subjugation and defeat. The book manages to give a sweeping overview of the whole tragic clash between white man and Indians, and yet makes the pivotal battles thrilling, describing them with the skill and intimacy of a novelist.

5. Frontier Regulars (Robert Utley, Indiana University Press): An absolute goldmine of information about the Indian-fighting army of the West 1866-1890, should you want to know anything about soldiers of this period—what they wore, ate, were armed with, etc. —this is the primary source. Utley also manages to give remarkably balanced accounts of the still-controversial campaigns they fought.