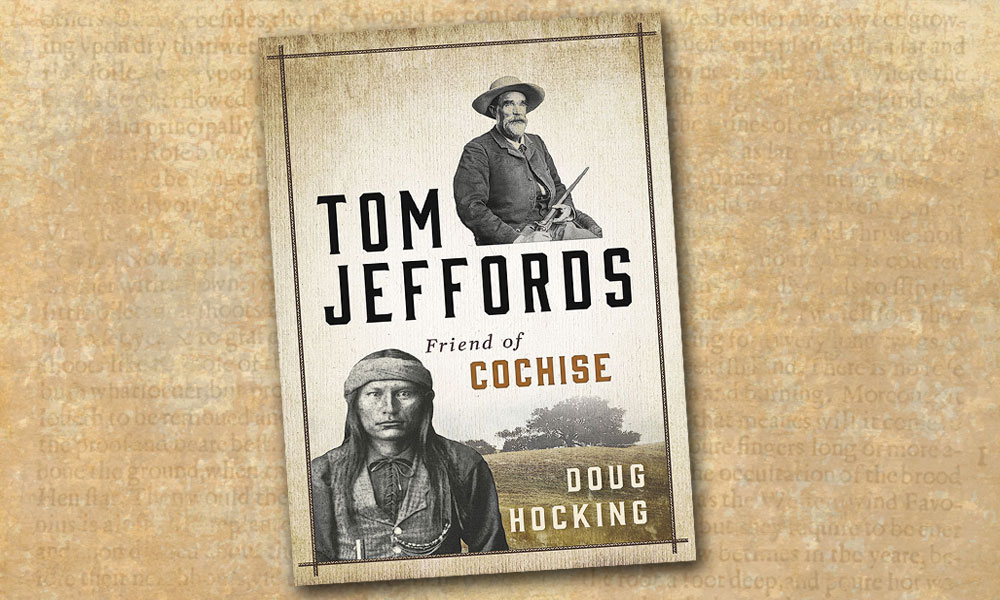 Following the 16th-century Spanish entrada into the future states of Texas, New Mexico and Arizona, centuries of war and uneasy peace defined life and death in the arid region between generations of Spanish and Mexican settlers and the Native tribes of the Southwest.

Three centuries later, the American Empire’s entrance into the Mexican-Indian borderlands would redefine the violent relationship of raiding, revenge and retribution between Mexico and the Southwestern tribes, into a trilateral conflict over the control of the limited—but precious— resources needed to satisfy the United States’ empirical goals of Manifest Destiny in North America.

From this international three-way border conflict between Mexico, the United States and the Apache people emerged several leaders, many famous, some infamous and many forgotten. Two would become legends, forever entwined historically in war and peace, in truth and fiction.

The brilliance of historian Doug Hocking’s lean biography, Tom Jeffords: Friend of Cochise (TwoDot, $16.95), is his determination to write the record from primary sources and the accounts of the eyewitnesses and participants who left a paper trail of the events as they occurred.

He acknowledges in detail how Jeffords—one of the Southwest’s most enigmatic figures—and his friendship with Chiricahua leader Cochise—has been romanticized by novels, film, television and popular culture, clouding the truth and historical record, with numerous historians trying to write but never completing a published biography of the red-bearded gold-seeking sailor from the Great Lakes.

Hocking states in his introduction, “I’ve tried to be an honest broker of history. I won’t tell of Apache wives, mystical blood brother ceremonies, or shooting a pistol out of Will Harden’s (John Wesley Hardin?) hand. Even without the fancy stage dressing and legendary nonsense, the story is still compelling. It is the story of a strong man doing what he thought right.”

Jeffords’ roles in the Southwest as a prospector, U.S. Army scout, Indian agent and friend to Cochise are the centerpiece of Hocking’s biography, but the author also includes introductory and concluding chapters that provide the reader with a broader understanding of the native New Yorker who first went west to sail and captain ships on the Great Lakes, before heading farther west to seek his fortune in gold.

His concluding chapter includes the intriguing tale of Jeffords’ late-in-life friendship with Alice Rollins Crane, who, according to Hocking, was “a strange woman…who sought him out in 1895, and set him on his last great adventure.”

The strength of Hocking’s biography is his coverage of the early years of the Apache War, which was ignited by the Bascom Affair of February 1861—carefully retold and analyzed from the primary sources and eyewitnesses—Jeffords’ migration and multiple professional ventures in southern New Mexico and Arizona territories, his friendship with Cochise, and his departure from the Chiricahua Agency to return to prospecting after the Apache leader’s death in 1874.

Hocking’s impeccable research, inclusive bibliography and detailed, and very useful, endnotes provide a historiography of archival, primary and secondary source material available to researchers and scholars of Jeffords and American-Apache history, especially from the Bascom Affair in 1861 and the end of the old agent’s life in 1914.

What is hard to believe is that a stand-alone biography of the influential and well-known Jeffords has taken so many decades to be published. But the fortune is all ours, as Hocking pursued his oft-romanticized subject with the diligence of a detective, thoughtfulness of a historian and passion of a storyteller.

After reading the Cochise County, Arizona, author’s first major biography, I believe you will have to agree with Hocking’s conclusion: “Tom Jeffords was a great man, respected and loved by the Arizona Pioneers and Chiricahua Apache.”