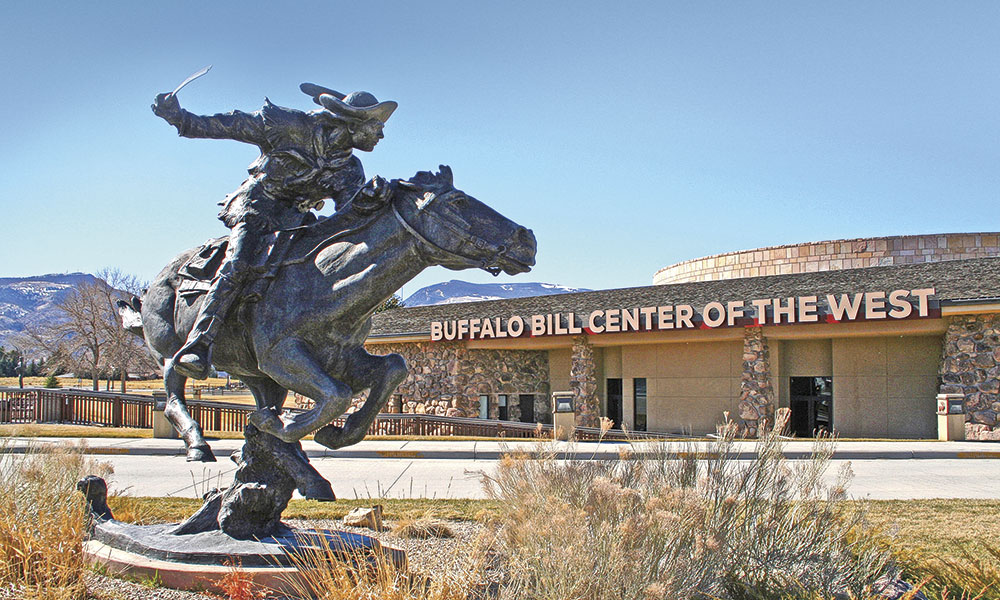 Museums across the West are embracing an ever-widening range of stories to interpret—from the geology and paleontology of the landscape to the cultural materials of Western film and Western art. Big new installations were made and significant milestones were reached this year.

The West’s greatest showman, William F. “Buffalo Bill” Cody, gets his due at two museums with the recognition of the centennial of the Buffalo Bill Memorial Association—which grew into the Buffalo Bill Museum, now a part of the Center of the West in Cody. And the Buffalo Bill Gravesite played homage to the man on the 100th anniversary of his burial on Lookout Mountain, west of Denver.

Celebrations along the Chisholm Trail recognize the sesquicentennial of that cattle route, while one Texas museum opened expanded and reimagined exhibits, taking visitors from a gallery of dinosaurs to the rock art and ecological zones around San Antonio.

1. Buffalo Bill Center of the West

From its roots in a small log building to being one of five museums in today’s Center of the West complex, the Buffalo Bill Museum in Cody has been dedicated to preserving the story and heritage of the great American West showman.

This year the Buffalo Bill Museum celebrates its 100th anniversary with a series of special events, new exhibits, including a gallery focused on Harold McCracken and his work, plus the new Western Writers of America Hall of Fame.

What museum officials call a once-in-a-hundred-years exhibit upgrade opened this year at the Witte Museum, where the McLean Family Texas Wild Gallery added 10,000 square feet of space that immerses visitors in the ecological zones of Texas, all under a large Texas sky.

The museum shows the changing geographical landscapes of Texas, from the time of the dinosaurs to rock art and geology.

With items dating from the 1800s to present, the collection is the world’s largest—and most historically important and inclusive—assortment of Western film graphic arts.

Of course, we also love outlaws and lawmen and like that the museum presents “Western Wednesdays—Outlaws and Lawmen of the Wild West” programs geared toward children. Anybody who works hard to share history with kids is top-notch in our book.

Also in the collection is a war shirt that belonged to Two Leggings—a piece that was selected in 2016 as one of the top ten historic artifacts in Wyoming—plus a Blackfeet war chief’s 1830s shirt and leggings, a Blackfeet Grizzly Bear shirt and a Lakota woman’s beaded dress

Seeking to continue the legacy of the cowboys, Old Cowtown is expanding its saddle and harness exhibit and the livery stable to better display buggies and rolling stock. The Abel “Shanghai” Pierce Cattle Agent office portrays the cattle industry of the West, interpreting the sale of herds that moved up the Chisholm Trail.

This year the historic town celebrates the 150th anniversary of the Chisholm Trail with special events October 6, and holds Victorian Christmas events in December.

Artifacts related to the 1864 Battle of Adobe Walls involving Kit Carson, the Red River War (1874–’75), and Buffalo Soldiers are all good reasons to visit Panhandle–Plains Historical Museum. On display until February 2018, is “When Georgia Was Here,” an exhibition about Georgia O’Keeffe, including her piece, Red Landscape.

The museum also holds a shield with both Spanish and Comanche origins. It was likely acquired by a Comanche from a Spanish soldier at the battle of Yellow House Canyon near Lubbock.

The Comanche owner covered the original Spanish decorations on the shield with a piece of bison hide, making it the oldest known Comanche-Spanish hybrid artifact.

While not everything in Tombstone is original, that is what makes Tombstone Courthouse State Historic Park such a great attraction in this most Western of Western cities.

The two-story Victorian-style red-brick courthouse was constructed in 1882, a year after creation of Cochise County, and served the county for fifty years. In 1931, the county seat was relocated to Bisbee.

The city of Tombstone leased the building and used it for years until it became an Arizona State Park. For a special view, visit during the annual luminaria lighting, held in conjunction with the local Christmas parade, to be held this year on December 9.

This year the museum hosted “Stories of Southwestern New Mexico Women,” an exhibit featuring multicultural stories of the Mimbres, Apache, African American, Mexican and Spanish women who shaped the town in the early 20th century.

The museum strongly represents the 18th and 19th centuries and also sponsored an exhibit titled “The Universality of the New Mexico Colcha Stitch: from Central Asia, the Iberian Peninsula and Northern New Mexico.”

Home to the South Dakota State Museum and Archives, this center is attractive enough as a location to dig into the history collections of the state, but go there to also learn the stories of the Lakota, Nakota and Dakota people.

You will see an Indian camp, bull boat and other artifacts. The “Proving Up” exhibit features stories of explorers and settlers, ranging from the placing of the Verendrye Plate in 1743 on a hillside west of the city to the establishment of the state capital.

Ride a raft with Huck Finn, visit a cave with Tom Sawyer, or learn more about Samuel Clemens (Mark Twain), his work as a riverboat pilot and his journeys in the West in an area dedicated to “Roughing It.”

This summer, the museum hosted radio-theater productions of an adaptation of Huck. Newly installed is the 1840-era Justice of the Peace office of John M. Clemens.

Candy Moulton lives near Encampment, Wyoming, and has traveled the United States extensively, always making time for a visit to a local museum.