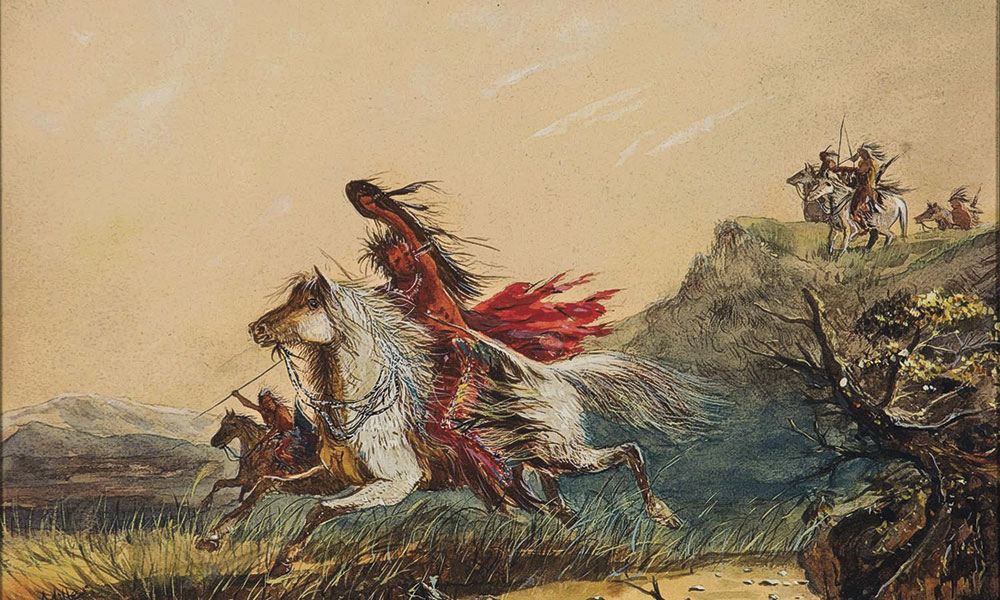 Alfred Jacob Miller did not leave his viewers guessing at what inspired his 200 watercolors that William Walters commissioned, beginning in 1858. He left behind descriptions of each creation.

Miller first struck gold as an artist when Capt. William Drummond Stewart hired him to paint for his Rocky Mountain expedition that set off in 1837. He transcribed these field sketches into grand works for Walters.

The virtuoso’s larger artworks (in the 21-by-48-inch range) have approached the $2 million mark at auctions. For a fraction of that, collectors can purchase one of Miller’s smaller pieces, as one did, the eight-by-23-inch Beating a Retreat watercolor, at Brian Lebel’s Old West Auction on June 10 in Fort Worth, Texas. The hammer fell at $120,000.

“Although this Sioux Indian has an immense range of his own to hunt over, he is not content with it and we find him here on the grounds of the Blackfeet,” Miller’s notes for this art began. “The latter from a bluff have discovered the marauder, are discharging their arrows at him and in a rage because they are not nearer in order to secure his scalp.”

We know from his other notes how the artist felt about the Blackfeet (“Of all others the Blackfeet have the worst reputation for warlike propensities and keep their neighbors generally in active and lively movements to repulse them”) and the Sioux (“Among this tribe we found some as fine specimens of Indians as any that we met. They reminded us strongly of antique figures in Bronze…. Nothing in Greek art can surpass the reality here”).

Of the Sioux in his watercolor, he continued: “The retreating Indian is defending himself as he runs, as best he can. The shield which he uses is covered with bull-hide and becomes so tough in time that no arrow can penetrate its surface. His great care is to protect the head and body, letting his extremities take their chance. In case an arrow penetrates his leg or arm he still continues his flight to a place of safety, his capability to bear pain and patience under its infliction is wonderful.”

Miller’s Sioux must press on because he knows, as the artist writes elsewhere, that the Blackfeet terrors will be “determined in their vengeance.”

Viewers are not often privy to the aftermath of an artwork. Yet Miller offered that gift for this watercolor, writing, “When he is no longer pursued, if wounded he sits down and cuts out the arrow compressing the wound with a bandage drawn tightly around it and enclosing medicinal plants if they are to be found.”

Five other color versions of this work can be found in museum collections, along with one nobody has found. Along with this top lot at the Old West auction, collectors earned nearly $1 million for Western Americana lots, notably firearms owned by both real and reel icons of the frontier West.