FROM THE MAGIC CITY OF THE PLAINS TO THE LITTLE BIGHORN AND THE “GRANDEST” TRADING POST OF THE FUR TRADE, A ROAD TRIP THROUGH EASTERN MONTANA OFFERS NO SHORTAGE OF FRONTIER FUN.

Billings, Montana, was little more than a boomtown in 1882, when pioneers and newspapermen throughout the country began to refer to the bustling Western metropolis as “The Magic City of the Plains.” Today, Billings is a perfect place to jump- start a road trip through the historic and majestic big sky country of eastern Montana and the gateway to some of the richest historical sites and scenic wonders of the Treasure State. Formerly known as Clark’s Fork Bottom, Billings was named for Frederick H. Billings, president of the Northern Pacific Railway. Though some folks in Miles City may have been tempted to dismiss the upstart community as “Bilkings” in the early days, Billings had all the makings of a great community and was destined to become the largest city in Montana. “Billings has a location that can be depended upon—a location that will make it a railroad town, a cattle shipping, bullion shipping and a town backed up by numerous and well-paying farms,” The Bozeman Weekly Chronicle observed in 1883.

Visitors to Billings would do well to begin their journey with a stop at the Western Heritage Center (scheduled to reopen in March 2021). This fine museum in the city’s historic downtown district is in an impressive classic-looking Richardsonian Romanesque building that once housed the Parmly Billings Memorial Library. Affiliated with the Smithsonian Institution, the Western Heritage Center offers guests exhibits that showcase the history of Billings and the surrounding Yellowstone River Valley. While in Billings, be sure to also check out the Yellowstone County Museum, home to Old 1031, a Northern Pacific steam engine built by the American Locomotive Company in 1903. This museum also includes an impressive firearms exhibit and a display honoring exhibition marksman Tom Frye. Art lovers will want to stop by the Yellowstone Art Museum, where current exhibitions include Women by Will (through September 17, 2021), showcasing over 30 illustrations of cowgirls and frontier women by legendary artist Will James. As the museum’s website explains, “These drawings, like all of James’ work, combine Western myth with the artist’s personal experience.” 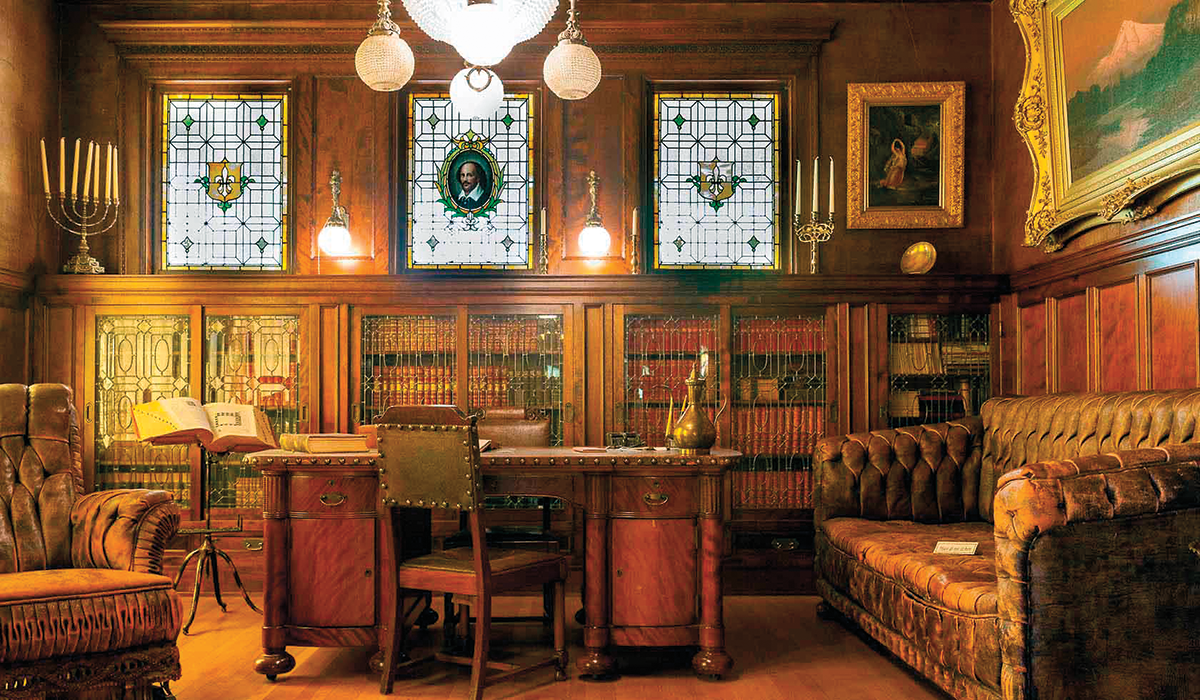 Before leaving Billings, be sure to check out the Moss Mansion Historic House Museum, the former residence of prominent resident Preston Boyd Moss. Featured in Son of the Morning Star and Return to Lonesome Dove, this spectacular home was designed by Henry Janeway Hardenbergh, the architect responsible for New York’s Waldorf-Astoria Hotel. “The spaciousness of the home, together with its artistic, elegant furnishings, makes it an ideal place for entertaining large companies, as three hundred people can move about the rooms at one time, and in no way be inconvenienced,” The Billings Daily Gazette declared in 1905. “There is no home in Montana, however palatial they may be, that surpasses this one in point of elegance, nor none that has a more hospitable host or gracious queenly hostess, than the Moss home.”

If you’re in need of modern-day hospitality, look no further than the historic Northern Hotel, which has been voted the best hotel in Billings every year since 2013. There’s no shortage of dining options, but a few local highlights include Montana’s Rib and Chop House, Montana Brewing Company and Jake’s Downtown, a Tripadvisor Traveler’s Choice for 2020.

To Hardin and the Little Big Horn

From Billings, travel east along U.S. Interstate 90 for about 46 miles and you’ll arrive in Hardin, Montana. Be sure to check out the Bighorn County Historical Museum and Visitor Center, which sits on 35 acres and includes 24 historic structures, including cabins from Will James’ “Rocking R Ranch” and an original depot from the Chicago, Burlington and Quincy Railroad. If you’re hungry, stop by the 3 Brothers Bistro or the Four Aces Bar and Lounge.

From Hardin, continue for another 15 miles on I-90 until you reach exit 510 for U.S. 212 East. Drive just a short distance east from the interstate and then turn right into the Little Bighorn Battlefield National Monument. Following a stop at the park’s NPS visitor center, take the 4.5-mile road tour of the bat- tlefield. A guest visiting in the late spring or early summer will see this battleground of ridges and ravines overlooking the Little Bighorn Valley much as the soldiers of the 7th Cavalry did on that hot day in June of 1876 when they engaged Lakota and Cheyenne warriors in the seminal battle of the Indian Wars. Just southeast of the visitor center, you will find one of the most famous grassy hillsides in America, the place where Lt. Col. George Armstrong Custer and many of the 263 U.S. servicemen and scouts killed in action at Little Bighorn made their final stand. Monuments pay tribute to these soldiers and to the Native warriors who gave their lives in defense of their way of life. No trip to this hallowed ground is complete without seeing where the troops under Maj. Marcus Reno and Capt. Frederick Benteen dug in while under siege. “It was now quite late in the afternoon, but the fighting was kept up, the Indians surrounding us on every side, and waging an almost constant and relentless fire,” Theodore Goldin, a battle survivor and Medal of Honor recipient later recalled. During the month of August, visitors to the Little Bighorn Battlefield and the Crow Agency should attend the annual Crow Fair, the largest American Indian event in the State of Montana and among the best celebrations of indigenous culture anywhere in the country.

From the Little Bighorn Battlefield National Monument, continue east along Route 212 for 48 miles until you reach County Road 314. If you’re a diehard history buff interested in seeing another important battle- field from the Sioux War of 1876, travel south along 314 for about 22 miles until you turn right onto Rosebud Road. A short drive of about two miles will take you to the Rosebud Battlefield State Park. It was on this site, on June 17, 1876, a little more than a week before Custer’s demise at Little Bighorn, that troops under Gen. George Crook fought Lakota and Cheyenne warriors under Crazy Horse. According to Gen. Anson Mills, it was during this fight that Native warriors “proved then and there that they were the best cavalry soldiers on earth.”

Returning north to 212, turn right and continue east to Busby, Montana, where you might pay a visit to a historic monu- ment honoring Chief Two Moons, who fought at Little Bighorn. From Busby, you can continue east on 212 across the Northern Cheyenne Indian Reservation to Lame Deer, then turn left on MT-39 and head north for 50 miles until you reach U.S. Interstate 94 just west of Forsyth, Montana. From Forsyth, Miles City is a 46-mile drive up the Yellowstone River.

Miles City offers up a number of attractions, including the Range Riders Museum. You might try lunch or dinner at the Blackiron Grill & Rotisserie or drop in for a cocktail and a meal at the historic Montana Bar on Main Street.

From Miles City, continue northeast along U.S. 94 as it parallels the Yellowstone River until you reach Glendive, Montana. While in Glendive, you might want to visit the Glendive Dinosaur and Fossil Museum and the Frontier Gateway Museum. From Glendive, proceed north on MT-16 along the Yellowstone until you cross the state line at East Fairview, North Dakota. By taking ND-58 due north, you’ll cross the Missouri River just west of the confluence of the Missouri and the Yellowstone.

Ten miles from East Fairview you’ll find Fort Buford State Historic Site, a 19th-century U.S. Army post and the setting for the 1881 surrender of Sitting Bull. Here, existing structures, including an officer’s quarters, and exhibits help tell the story of the frontier army on the Northern Plains. From Buford, North Dakota, follow ND-180 west for about three miles as you make your way to Fort Union Trading Post National Historic Site. There, overlooking the Missouri River, you’ll find one of the largest and grandest trading posts in the history of the American West. The confluence of the Yellowstone and Missouri was, in the words of Hiram Martin Chittenden, “one of the most important situations in the West,” and nearby Fort Union would play a pivotal role in the story of frontier commerce during the colorful era of the mountain man and the trapper. “Here stood the greatest of the American Fur Company’s posts, Fort Union,” Chittenden remarked in his history of the fur trade, “where transpired many stormy events during the more than thirty years of its existence. It was in the country of the Assiniboine Indians, but many other tribes also made it their principal center of trade.” Today, Fort Union is a beautiful and breathtaking historical site and museum operated by the National Park Service. Annual events include an Indian Arts Showcase, which due to COVID-19 was held digitally in 2020.

From Fort Union, the modern-day explorer can continue west, along Highway 327 and U.S. Route 2 as they follow the Missouri River back into Montana across the Fort Peck Indian Reservation, or you can return to Miles City and Billings by way of U.S. Interstate 94. Either way, this expedition across the high plains and along the rivers will take you through some of the most awe-inspiring wide- open spaces in North America.

great side trip during a visit to Billings and takes visitors into the outdoor wonders of southeastern Montana. It was here that Plenty Coups, a famous Crow leader, established a 320-acre farm and general store in the 1880s and spent the later years of his life. Visitors to the park can tour Plenty Coups’ log home and enjoy a scenic walk along nearby Pryor Creek. FWP.MT.gov.