HIT THE ROAD AND DISCOVER THE GRAND HISTORY AND HERITAGE OF WILLIAM CODY ACROSS THE COWBOY STATE.

Will Cody and his father stood on a hill and looked down into a lovely grass-filled valley. He later recalled that what most drew his attention was “a vast number of white- covered wagons.” The wagons were prepar- ing to cross the Great Plains, a huge region that stretched from the Missouri River to the Rocky Mountains. On that promontory, in the newly opened Kansas Territory, young Cody vowed that someday he too would travel westward.

The eight-year-old Cody’s wish to venture into the American Wild West was fulfilled three years later in 1857, when he got a job on a wagon train. Hauling freight along the Oregon Trail and bound for Utah, the wagon train left St. Joseph, crossed into Nebraska, and then proceeded to Fort Laramie. There, for the first time, Will Cody encountered Wyoming, which straddled the Great Plains

and the Rockies. He would return to the state many times, eventually making it his home.

A visit to William F. “Buffalo Bill” Cody’s Wyoming should begin where he first entered the state, at Fort Laramie. Located along the North Platte River, this historic fort was an important way station, providing protection and supplies on the frontier super highway that was the Oregon Trail. Buffalo Bill later wrote that, returning to Fort Laramie after one particularly long and difficult trip, he finally had “a square meal once more, consist- ing of hard tack, bacon, coffee, and beans. I can honestly say that I thought it was the best meal I had ever eaten.” Today, the restored fort is a historic site maintained by the National Park Service. There are furnished barracks, a trader’s store and other restored buildings from the fort’s heyday, all maintained and operated by the National Park Service.

Just west of Fort Laramie is the town of Guernsey, where a small visitors center is the jumping off point to several sites important to westward migration. The center is open from Memorial Day through Labor Day. There one can learn how to find the grave of Quaker Alvah Unthank (a distant relative of mine), one of very few identified graves of the many who died along the Oregon Trail. The wagon trains, in which Will Cody and those pioneers rode, would have traveled along the bluffs to the south of the North Platte river. On the bluffs one can still see the deep ruts left by the wagon’s wheels, as well as the names of Unthank and other travelers carved into the rock of Register Cliff. 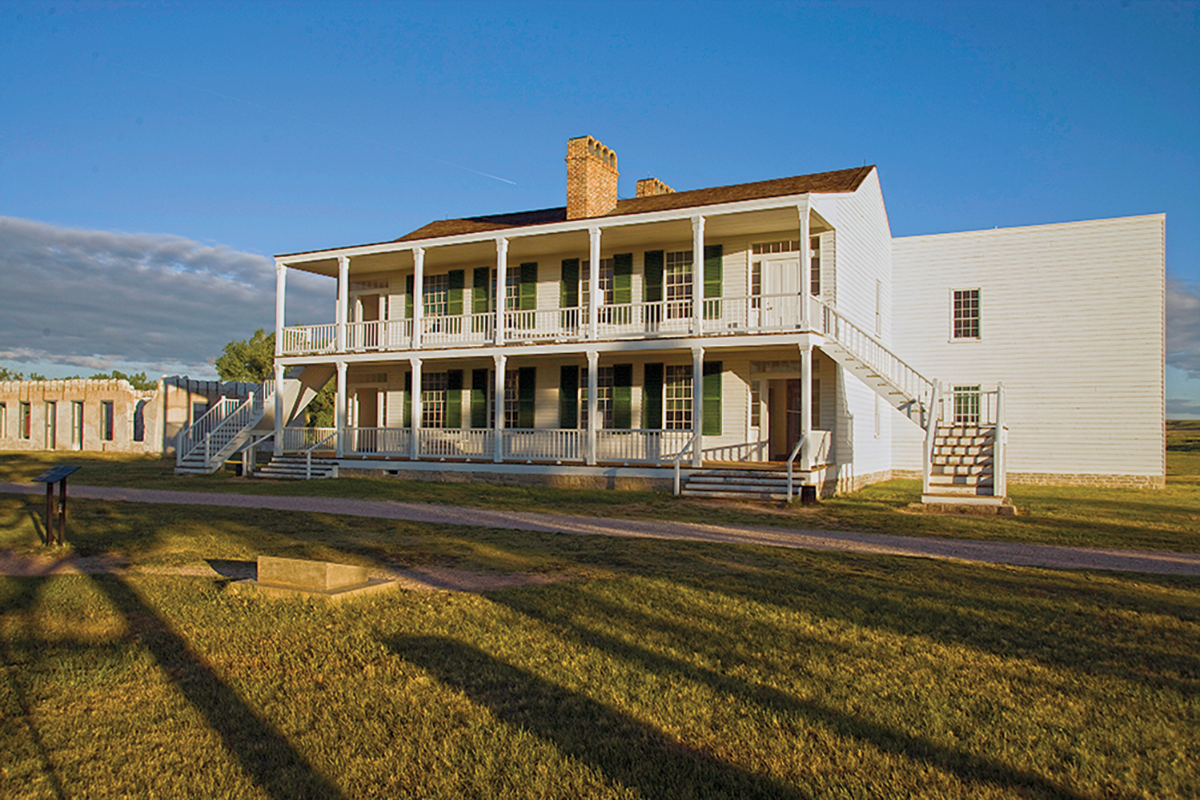 Westward from Guernsey, the Oregon Trail proceeds to Casper. The first stop in Casper should be the National Historic Trails Interpretive Center, which tells the story of the Oregon and California trails, the Mormon Trail and the Pony Express, all of which followed the North Platte and passed through Casper. Outside of town is Fort Caspar, which dates to 1859. Like Fort Laramie, it began as a trading fort, then became a military post protecting travelers along the trail, which crossed the North Platte at this point.

Fort Caspar is now a restored historic site with a visitors center and museum.

From Casper, the Oregon Trail continues westward to other landmarks and the west coast. Our trail through Buffalo Bill’s Wyoming heads north to Sheridan. There one encounters his later life, after he became a famous buffalo hunter, scout and showman. Travelers on this route have their choice of the same accommodations and eating places that Buffalo Bill enjoyed. Just before Sheridan, in Buffalo, is the Occidental Hotel, which has offered fine food and lodging since Cody stayed there in the 1880s.

He was just one of many great Westerners, including Theodore Roosevelt and Calamity Jane, to stay at the Occidental. In 1892, Buffalo Bill invested in a new hotel in Sheridan. The Sheridan Inn became his new favorite stop in Wyoming. On occasion he sat upon the hotel’s long front porch and auditioned new acts for his show. Today it is difficult to choose between these two historic hotels, so stay a night or more in each. There are plenty of area attractions to keep visitors busy for several days. Among the sites to visit in Sheridan is King’s Saddlery, a source for Western gear, clothing and décor. The shop also has an amazing collection of saddles and other artifacts. Just south of Sheridan is the Brinton Museum and Ranch. The ranch house, furnished with Remingtons, Russells and other Western art, provides a glimpse of the high life in early 20th-century Wyoming. A new museum building houses a gallery of outstanding American Indian artifacts, a gift shop and a bistro. Nearer to Buffalo is Fort Phil Kearney Historic Site, with its interpretive center telling the stories of the Indian Wars and the Bozeman Trail. In Buffalo, the Occidental Hotel is at the center of over a dozen historic sites, including Craig Johnson’s Bucking Buffalo Supply Company, where fans of Longmire can get souvenirs, autographed books and Western apparel.

By the 1880s, Buffalo Bill could stay in the finest hotels in the United States. But he also enjoyed camping during the Wild West’s off-season. After months of appearing in and coordinating the show, he headed west of Sheridan to the Big Horn mountains, his happy hunting grounds. Even before Cody first encountered them, those hills attracted American Indians for both hunting and worship. After crossing the Bighorns on U.S. 14, the Medicine Wheel National Historic Site can be viewed after a scenic one-and-a-half-mile hike. It is estimated that this sacred site has been in use for several hundred to several thousand years. Sur- rounded by the majesty of the Rockies and easily accessible, it is easy to see why it has been so important for so long. 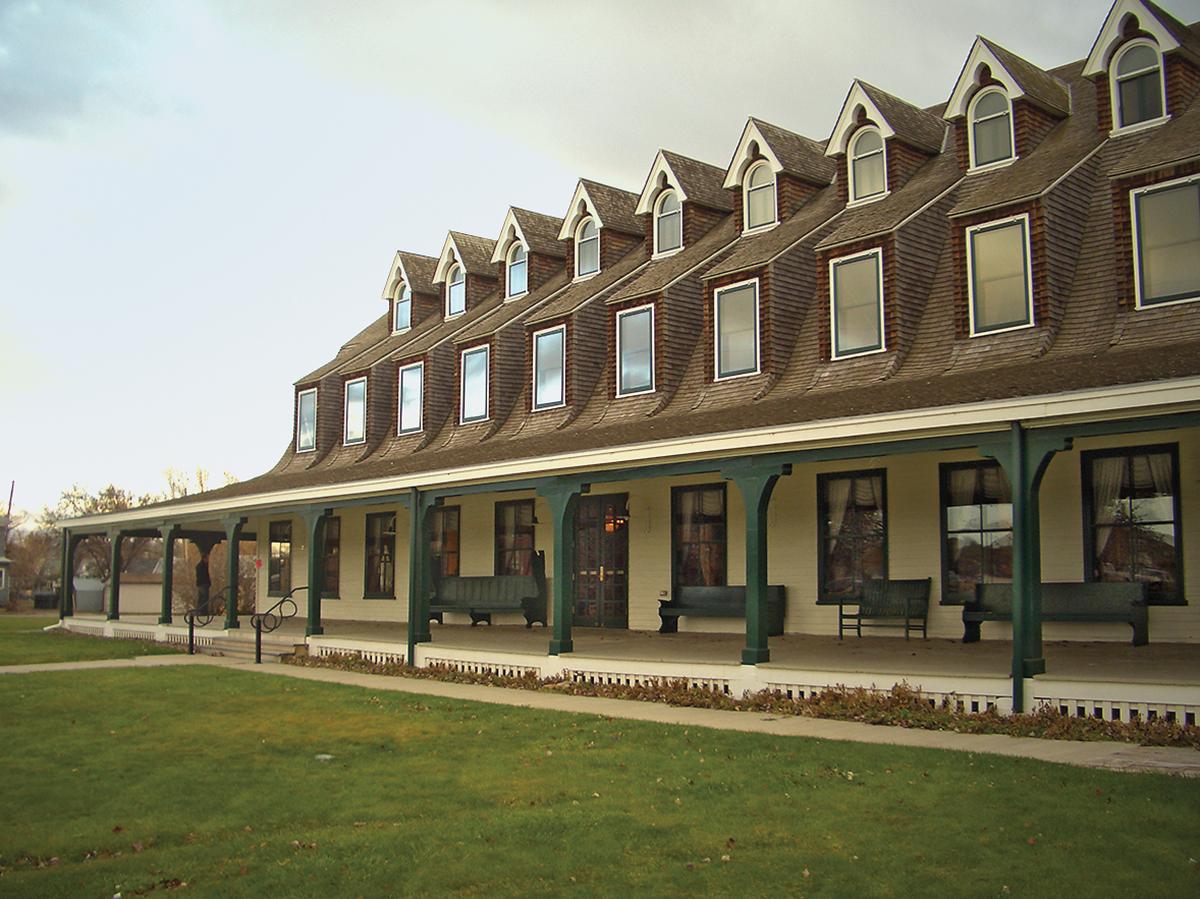 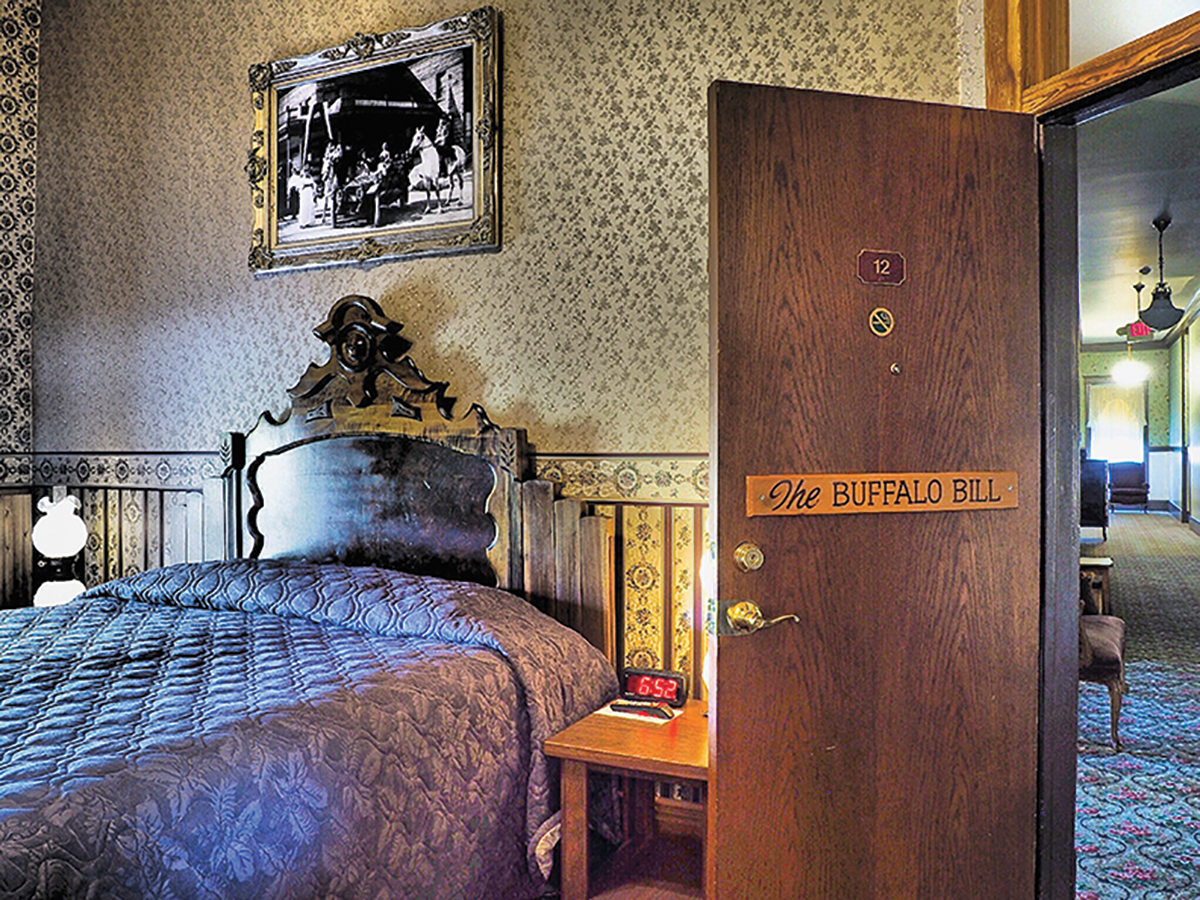 The drive across the Bighorns is an apt introduction to what is best called Buffalo Bill country. Passing a scenic waterfall and descending into the large and fertile Bighorn Basin, one encounters the town of Cody. It was founded in 1895 by Buffalo Bill and his Wyoming friends, who named the town after him. Today the Buffalo Bill Center of the West dominates the town. Sometimes called the Smithsonian of the West, the center’s five museums highlight the art, firearms, nature and history of the area as well as the story of the town’s founder and one of America’s best known historical figures.

The center, consistently recognized by True West as among the Best in the West, demands at least a full day’s visit. Cody has plenty of places to eat and sleep. The most historic is the Irma Hotel, built in 1902 by Buffalo Bill and named for his youngest daughter. A finely carved saloon back bar, old photographs and artwork dec- orate the hotel’s restaurant. A night in one of the hotel’s historic rooms is a step back into a time when visitors like the Prince of Monaco stopped to visit Buffalo Bill on their way to Yellowstone. Other interesting places to dine include the Proud Cut Saloon, just a block from the Irma, and Cassie’s Supper Club, a former bordello on the edge of town.

Cody is the eastern gateway to Yellowstone National Park, a fact that did not escape its founders and helps drive the town’s economy today. Driving toward the park and just beyond Cassie’s, one can see, and smell, gases escaping from vents along the Shoshone River
(first named the Stinking River by John Colter). At one time, Buffalo Bill invested in a small hot springs resort along the river’s banks. His biggest investment, however, was in bringing water to the fertile lands of the Bighorn Valley.

The route to Yellowstone passes by a dam named after him, creating a scenic reservoir. Buffalo Bill State Park offers camping and picnic spots. The nearer one gets to the national park, the more interesting the views become, with bizarrely shaped rock hoodoos alongside the road and buffalos crossing it in early springtime. Just outside the park is Pahaska Tepee, established by Buffalo Bill in 1905 and still operating as a resort. Pahaska was Buffalo Bill’s Lakota nickname, meaning Long Hair. The resort was given that name by Buffalo Bill’s friend and Wild West per- former Iron Tail.

The glories of Yellowstone National Park need not be repeated here, except to say that Buffalo Bill frequently spoke on behalf of saving it and other wild places in the West. He left his stamp upon the park and the entire Bighorn Basin area.

Departing Cody, one leaves Buffalo Bill country through the town of Thermopolis. After viewing all of the hot springs and other thermal attractions of Yellowstone, it is a good stop for persons interested in taking a relaxing soak. The site of one of the largest hot springs in the United States, Hot Springs State Park in Thermopolis offers several places of lodging and water parks that take advantage of its main geological feature. The route through Buffalo Bill’s Wyoming concludes with a drive through the scenic Wind River canyon outside of Thermopolis, leading the visitor back to Casper and I-25.

Wyoming offers both the spectacular and the subtle when it comes to nature and history. While he spent most of his life

traveling the United States and Europe, Buffalo Bill’s heart belonged to the Great Plains and the Rocky Mountains, both a part of Wyoming. Spend a few days along this route and it is easy to see why he grew to love the state.

Located off Wyoming 220 near the Devil’s Gate on the Oregon Trail, the

Mormon Handcart Visitors Center tells the story of the immigrants who followed the Oregon Trail on their way to Salt Lake. There one can learn the tragic story of members of the Martin and Willie companies, who pushed and pulled their handcarts to this point in 1856. Trapped by a winter storm, 67 died in the Willie group, and as many as 150 died in the Martin group. It is a poignant tale of the hardships endured by those who traveled the Oregon Trail. WyoHistory.org