“I’m Your Huckleberry” Has a Double Meaning for Old Tucson 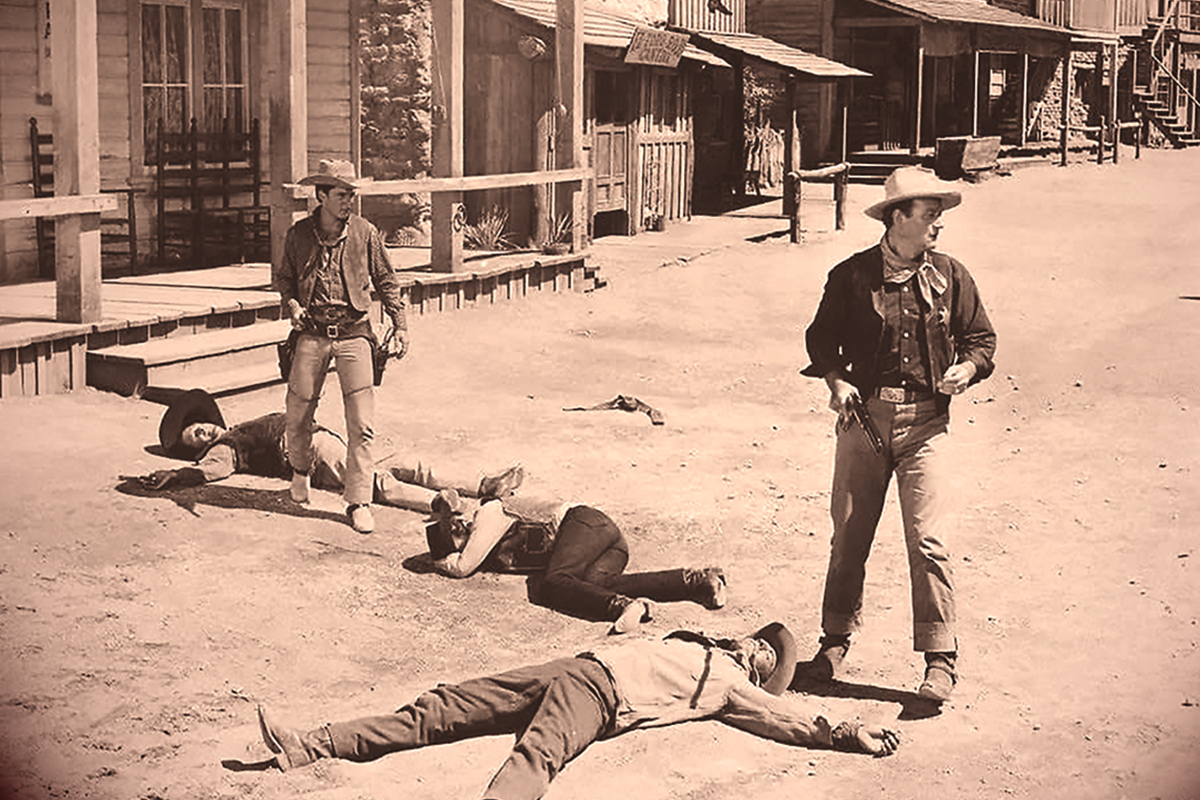 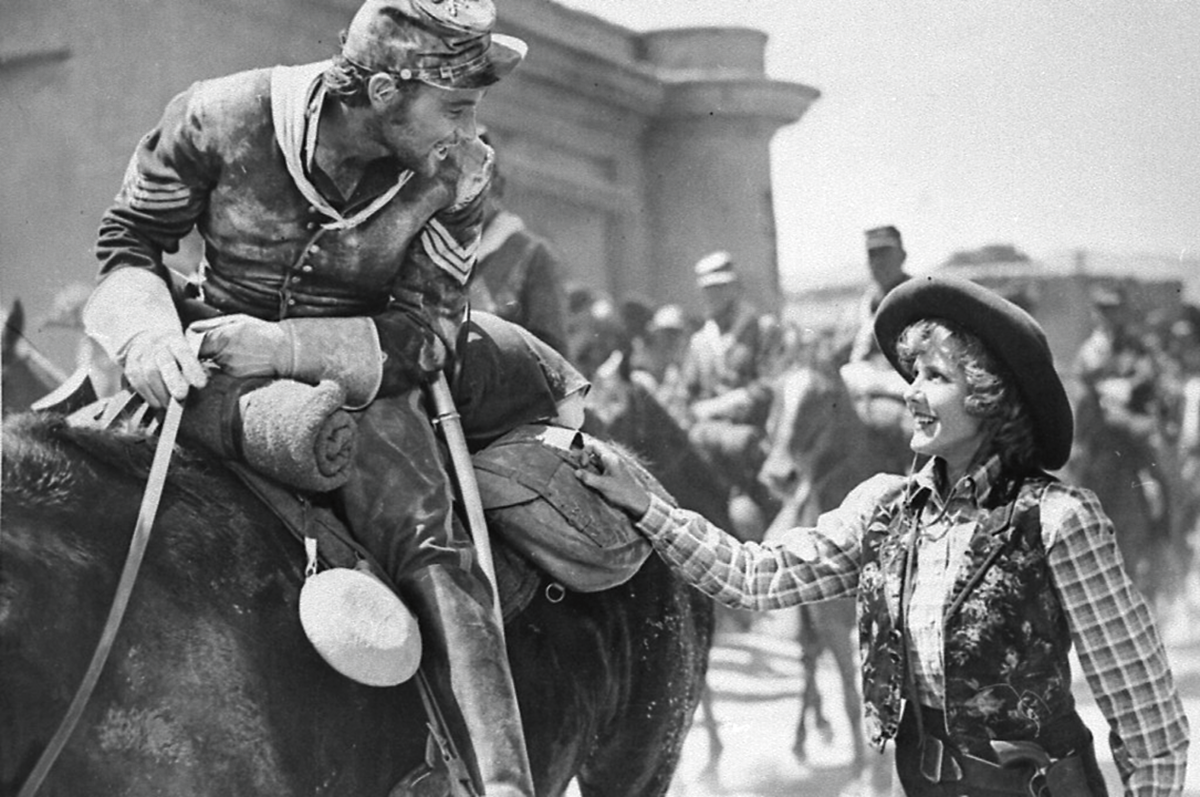 Saving the old girl is more than a dream.

Everyone wants to save “Hollywood in the Desert”—the Old Tucson Studios that hosted more than 400 films and television projects in the eight decades since Columbia Pictures decided to build an 1860s replica of Tucson for its game- changing Arizona.

Until then, Western movies were shot on a back lot in Hollywood, but that wasn’t good enough for Jean Arthur (above, right) and William Holden, starring in a lively story of a determined woman fighting corruption as she makes a new life in Arizona Territory. The $2.5 million film—the equivalent of $46.5 million in today’s money—set a new standard of realism for Hollywood Westerns.

No wonder everyone loves the iconic history of a studio and Western town attraction that once was a top Arizona tourism spot.

Everyone has faith that the recession of 2008, then the Arizona Legislature’s decision to cut back on government support of films (boneheaded comes to mind) and now COVID can’t ruin something that has meant so much to the 48th State and the legacy of Western entertainment.

“Everyone” in this case includes the fans who frequented the theme park—34,000 came to its annual Nightime fundraiser in 2019— the moviegoers who have loved the Westerns shot here, the citizen’s task force that is charged with finding a new life for the old girl and the Pima County government that owns the property and sees it as a cherished part of the county’s history.

It doesn’t hurt that Arizona’s Gov. Doug Ducey’s new communications director is a transplanted Tucson boy who has nothing but fond memories of Old Tucson. “We came out years ago in the middle of summer from Connecticut after my grandparents moved here, and Old Tucson was near the top of the must-see list,” remembers C.J. Karamargin. “If we can increase our tourism attractions and boost the quality and the experience people have when we go there, that’s something that benefits everyone in Arizona.”

That’s the kind of “everyone” that gets things done.

As County Supervisor Chairman Ramon Valadez told the Tucson media, “Old Tucson is a cultural and historic icon, not only for Pima County and Arizona, but for the country. A huge part of the nation’s film history is embedded in the land and the scenic vistas of the Tucson Mountains. Whatever the park’s future may be, the county will endeavor to preserve and honor that history.”

So far, the top two suggestions from the task force are to restore it as a tourist attraction and again promote it as a film studio. (Unspoken is the prayer that the Arizona Legislature will revisit offering incentives to filmmakers, waking up to how easy movie money is—a realization that has never escaped the state’s New Mexico neighbors.)

She was built from scratch in 1939 by local technicians and carpenters, helped by descendants of the Tohono O’odham, among Arizona’s original inhabitants. They constructed 50 buildings in just 40 days with 350,000 handmade adobe bricks and desert dirt. Many of those original buildings still stand, although some have been altered over the years.

But from such a great start, Act Two was five years off. It wasn’t until 1945 that the second film was shot there—Bing Crosby and Ingrid Bergman’s The Bells of St. Mary’s. That did prompt Hollywood to remember this great authentic Western town, and in 1947, Gene Autry starred in The Last Roundup. Then came Jimmy Stewart’s Winchester ‘73 and Ronald Reagan’s The Last Outpost in 1951; Gunfight at the OK Corral with Burt Lancaster and Kirk Douglas in 1956; The Lone Ranger and the Lost City of Gold with Clayton Moore and Jay Silverheels in 1958, and Cimarron with Glenn Ford in 1960.

Steve “Bunker” DeFrance has tons of memories of Old Tucson from his 30 years as a stuntman, including 52 episodes of NBC’s The High Chaparral. He not only saw the Western set through its heyday, he saw why it had a heyday.

“Bob Shelton was a godsend to southern Arizona and was the heart and soul of Old Tucson,” he says of the man who took over the lease in 1959 and started restoring buildings well showing their age. Under Shelton’s guidance, not only did the number of movies grow, the number of buildings grew—and Bunker might be one of the few left who remembers how that happened.

“Movies often had to add new buildings, and when they finished, Bob would negotiate to keep the ones he wanted.” That’s how Old Tucson added a saloon, bank building, doctor’s office, hotel, cantina, a jail. “He kept Old Tucson up-to-date and clean and grew it into the second-largest tourist spot in Arizona after the Grand Canyon,” Bunker said.

Not only was it a great place to work, but Bunker clearly saw how important it was to so many. “From the ranch set we could see the parking lot. If we saw two buses pull up, we knew they were Japanese tourists. If there were four buses, we knew they were Germans.”

Television crews came too, filming episodes of Little House on the Prairie and Bonanza and The New Maverick. Even Willie Nelson used Old Tucson as the backdrop for his album cover with Wynton Marsalis for Two Men with the Blues.

How appropriate that the 1993 remake of the classic Gunfight at the OK Corral was shot at Old Tucson—this one called Tombstone with Kurt Russell and Val Kilmer and his unforgettable line, “I’m your Huckleberry.”

In 1995, fire destroyed much of Old Tucson—especially its Western history paraphernalia—but it was rebuilt, and it reopened in 1997.

The park closed indefinitely last September due to COVID, but there’s hope it will reopen this fall with a new vendor and a new lease on life.

“Bunker” DeFrance has high hopes, but also worries. “Don’t Disney-fy it,” he begs. For his two bits, he’d have a sound stage, Western sets and a Western museum—maybe one that borrows from other museums for changing displays like the Scottsdale Museum of the West.

And he has an encouraging memory from about seven years ago that might be just the thing for today. He remembers being intro- duced to someone from the Smithsonian Institution in Washington, D.C., who was in Tucson exploring the idea of making Old Tucson an affiliated museum. Now, that would bring in tourism like free beer on a Saturday night.

Chances look good for the ole girl, if you believe in signs. Or incredible coincidences. Because how else can you reconcile that one of her biggest supporters is the top administrator for Pima County—a man who has taken a personal and profound interest in saving Old Tucson?