Did Doc Holliday “Open the Ball” Behind the O.K. Corral? 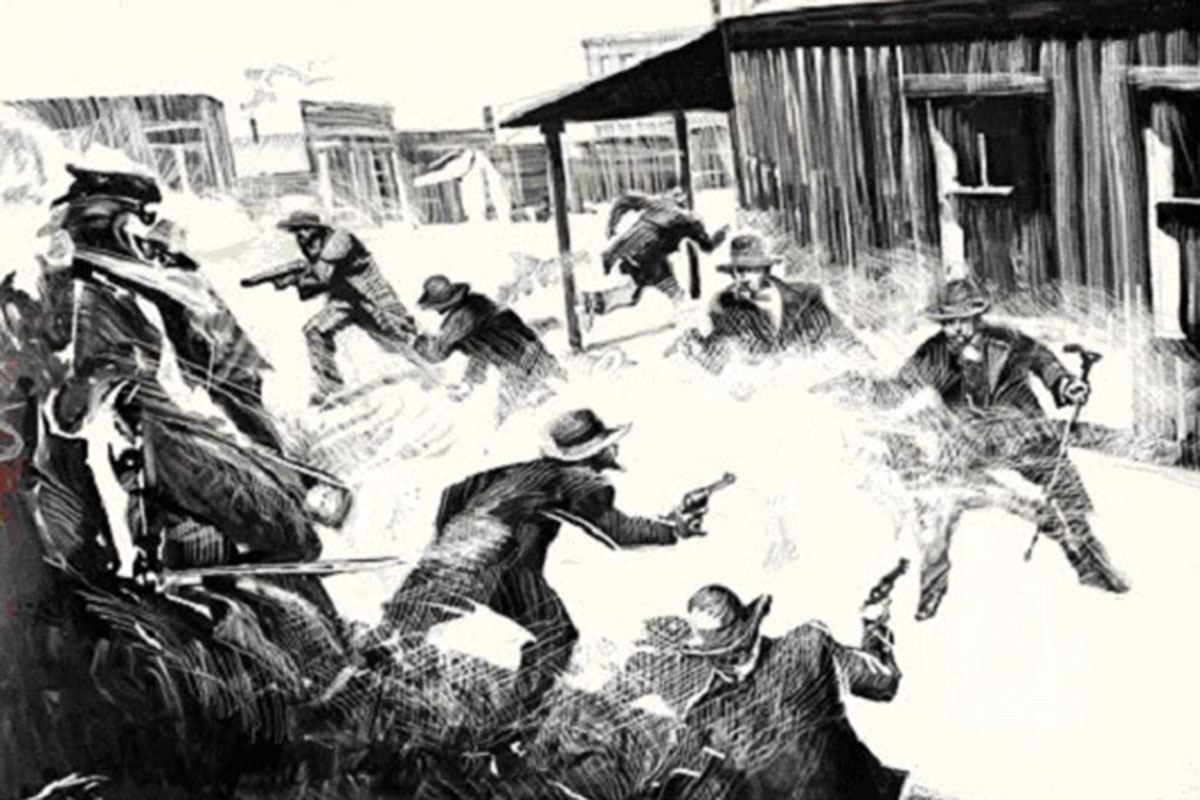 Many historians have claimed the actions of Doc Holliday “opened the ball” at the storied gunfight in Tombstone on October 26, 1881. Let me share some statements from some of the best experts on the notorious shootout.

“It seems none of the combatants were expecting it to turn into a full-blown gunfight except maybe Ike Clanton, the guy who did all the boasting about how he was going to kill the Earp’s and Holliday. He ran away when the fight commenced.

“Billy [Clanton] and Frank [McLaury] were armed, angry and on edge after learning of the pistol-whipping of Ike and Tom [McLaury] earlier that day. The Earp’s and Holliday became edgy when they saw two of the cowboys were armed.  Virgil and Wyatt had put away their pistols after Behan told them he’d disarmed the cowboys. Doc leveled his shotgun as they approached causing Frank and Billy to draw their pistols. After that things started to unwind.”

Doc’s biographer, Dr. Gary Roberts, says, “Doc moved into the street away from the three Earp’s” and “he understood his position was that of backup, so he positioned himself to prevent escape from the vacant lot.”

Now, put yourself in the position of Frank McLaury and Billy Clanton. What would you be thinking as you saw Doc move into the street, armed with a shotgun?

Following the two shots and the pause, Casey Tefertiller, writes, “Doc lifted the shotgun and stalked Tom McLaury behind the horse. Holliday closed in, then fired…”

Not being absolutely certain of these historical events is what makes the subject fascinating. To refresh my memory, I pulled Tefertiller, Roberts, Jeff Guinn and Allen Barra’s books off the shelf, along with Roger Jay’s story and all seem to agree up to a point.

There may not be a precise answer to the question. What was Doc’s body language? Was his shotgun up or was it under his coat? I’m not sure even the experts agree.

Keep in mind the whole thing from the opening shots to the end only lasted about thirty seconds. Even the eyewitnesses couldn’t agree on the sequence of events. It’s too bad photographer C.S. Fly didn’t have a video camera with instant replay so we could do a
better job of analyzing it.

Here’s how it probably played out: The Earp party was caught off-guard when they saw at least two of the men were armed. Virgil had shifted Doc’s cane from his left hand to his right and put his revolver away. Wyatt had pocketed his.

Wyatt was behind Virgil as the marshal moved towards Ike. Morgan remained on the sidewalk. Doc was still in the street but edged towards the center of the lot.

Virgil raised his cane and said, “Throw up your hands, boys. I want your guns.”

“We will,” Frank McLaury replied, but did not raise his hands, reaching for his pistol instead.

Billy Clanton also reached for his weapon. Tom McLaury, instead of raising his hands opened his coat, either to show he was unarmed or something that could be interpreted as reaching for a gun.

None of them raised their hands as Virgil ordered. “Hold, I don’t want that.” He shouted.

Virgil would later say he saw Billy and Frank reach for their pistols and heard a “click-click.” That was probably Doc cocking the twin hammers on his shotgun.

Wyatt, seeing Frank and Billy reach for their guns, pulled his pistol from his coat pocket and fired at Frank, hitting him in the stomach. Wyatt would later say he knew Frank was the biggest threat of the two. He was right. Billy, in his haste, fired and missed. Two shots fired at almost the same time. So, the first shots were fired by Wyatt and Billy. Wyatt and eyewitnesses testified to that.

Ike ran up to Wyatt trying to grab his arm. Inadvertently, he probably saved Wyatt’s life by shielding him from Billy’s line of fire. Wyatt brushed him aside saying, “This fight has commenced. Get to fighting or get out of the way.”

Ike lit out like a scared rabbit. Billy hesitated, waiting for Ike to get out of his way allowing Morgan to put a bullet in his chest. After those first shots, there was a momentary pause before all hell broke loose. Tom McLaury was standing beside a horse. When the gunfire startled the horse, he was either trying to reach for his pistol or to get a rifle out of the scabbard. Either way, his struggle exposed him to Doc, who raised his shotgun and cut loose with both barrels. Tom staggered into the street and died.

Was Tom McLaury unarmed? The Earp’s believed Morgan was shot by him. Wyatt would say that later the father of one of the cowboys, West Fuller told him his son took Tom’s pistol off him during the confusion following the fight. Another claimed Behan picked it up. An eyewitness also claimed Tom was armed.

Although he was mortally wounded Frank grabbed his horses’ reins and moved into Fremont Street. He managed to get off a shot, hitting Virgil in the calf. Despite being hit, Virgil fired and hit Billy in the wrist. Billy took another bullet from Morgan. Billy switched hands and continued firing until his pistol was empty.

Frank fired another shot at Morgan but his horse bolted leaving him with no cover. As Doc closed in Frank aimed at him and said, “I’ve got you now.” Doc replied, “You’re a good one if you do.”

Frank fired a round that only grazed Doc’s hip. Morgan and Doc both fired at the same time. Morg’s shot hit Frank in the head while Doc’s put a bullet in his chest.

Despite taking a bullet in the belly in the opening round of the gunfight, Frank might have done the most damage on the cowboys side. One of his bullets hit Morgan, another hit Virgil in the leg and a third poked a hole in Wyatt’s coat.

Billy was mortally wounded but still trying to re-load his pistol when C.S. Fly, whose studio was next to where the gunfight occurred, took his pistol from him. Game to the end, Billy would live in agonizing pain for another hour. Just before dying he moaned, “Goodbye, boys. Go away and let me die.”

Wyatt was the only combatant in the Earp party who emerged from the fight unhurt. Virgil was hit in the hip, Doc was grazed and Morgan was the most seriously wounded, hit by a bullet that ripped across his back, barely missing his spine. All in all, some thirty
gunshots were fired. One things for certain, the Earp’s and Holliday were the better shots that day.

Sheriff Behan found Ike cowering down on Toughnut Street and took him to jail where he was placed in protective custody.

The whistle at Vizina Mine blew, summoning the vigilantes, a group composed of some seventy citizens, their existence was not generally known. They were there to support the peace officers. The men gathered in the streets but their services were not needed. The fight was over.