The central Washington town of Toppenish came into being when a Yakama Indian named Josephine Lillie Parker sold part of her federal land allotment to non-Indian settlers in 1905.

Incorporation came two years later, and this friendly, postcard community in the Yakima Valley now boasts a vibrant agricultural sector centered around growing hops, a love of all things Western, and a remarkable collection of outdoor murals that draws tourists from around the country.

“We’re the city of murals and museums where the West still lives,” says Toppenish Chamber of Commerce Executive Director Paul Newman. “For a town of fewer than 10,000 people to have three museums is really unusual.”

So is a museum based on hops, the plant used in brewing beer. Housed in a creamery built in 1917, the American Hop Museum uses photographs, videos, exhibits and displays of equipment to tell visitors about growing and harvesting the crop.

The Yakima Valley accounts for 75 percent of the hop-growing in the U.S. Newman recommends that summer tourists check out the hop vines growing outside the museum.

The railroad played a key role in the area’s development, beginning with the Northern Pacific Railway’s 1884 construction of a depot called Toppenish. The Yakama Indian word describes a feature of the landscape and means “sloping downward and spreading.”

With its collection of artifacts and cars—such as a magnificent, ten-wheel steam engine—the Northern Pacific Railway Museum has honored that tradition since its opening in 1992. The facility is housed in a restored depot, built in 1911.

The third museum is a can’t-miss stop, both for its content and the building itself. Shaped like a huge winter lodge teepee, the Yakama Nation Cultural Center has a 12,000-square-foot exhibition hall explaining different aspects of the history, arts and ways of the region’s first people.

The site includes a gift shop, restaurant and RV campsite, as well as 14 traditional teepees representing the various tribes of the Yakama Nation. The center opened in 1980 and is one of the country’s oldest American Indian museums.

To some, the 78 murals of Toppenish, most downtown, constitute a fourth museum, although this one is entirely outdoors. The project began in 1989 and grew in number and popularity as folks came to appreciate the scale and beauty of what these talented artists had created.

One of the most popular and largest murals is titled Crossroads to Market. It depicts wagons involved in the hay trade, the railroad depot, early boat travel on the Columbia River, and in silhouette across the lower portion, a band of Yakama Indians riding along a ridge.

“That one really catches the eye,” says Newman. “What’s unique about the project is it covers so many different artists and styles, but they’re all telling the story of Toppenish from 1840 to 1940.” 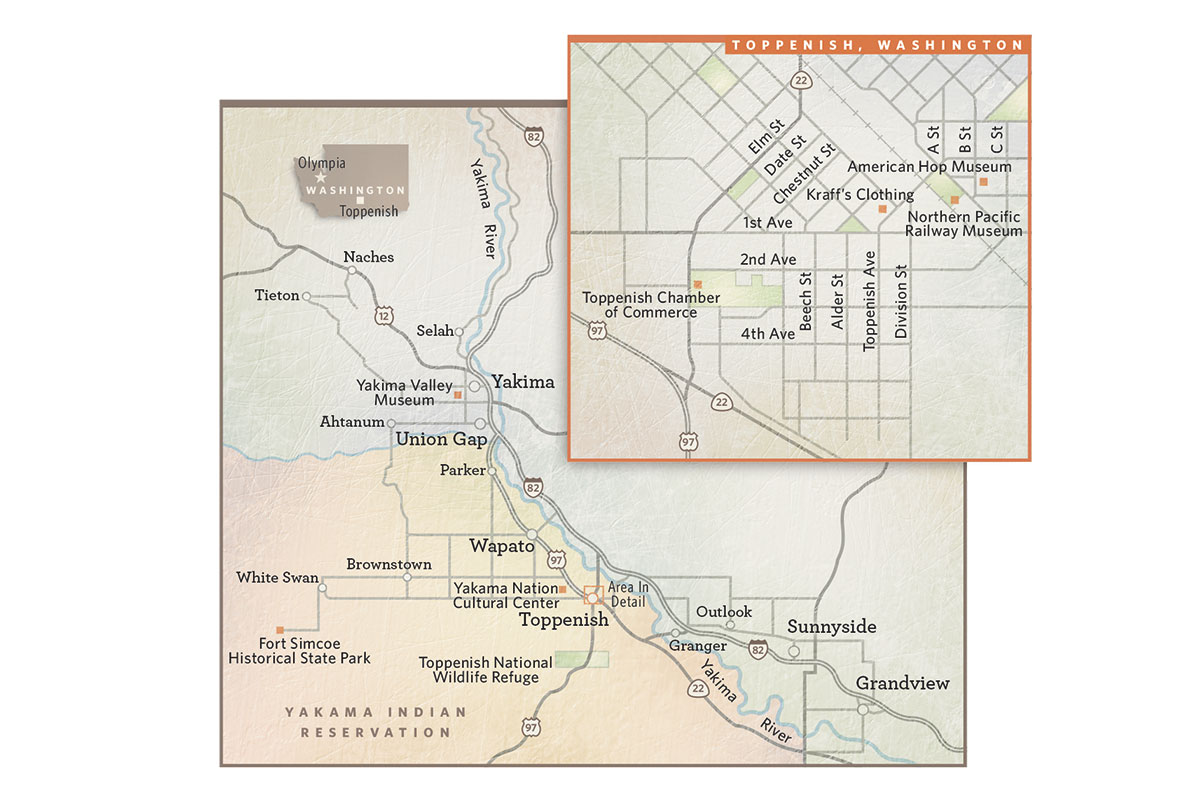 For wine lovers, the landscape around Toppenish is worth exploring. Many fine wineries operate within easy driving distance and offer tours.

Newman says those who prefer to stay in town love to stand outside the Chamber office and marvel at the year-round snow capping Mount Adams to the west and Mount Rainier to the north, even as the ground around them is lush green.

“People like to walk the pretty loop trail through the park next to our offices,” says Newman. “Even if there’s only a hint of a breeze, you can hear the great big American flag flapping overhead.”

The 3,200-square-foot flag flies atop a 167-foot flagpole, the tallest in the state.