Sometimes survival is a matter of listening to your inner voice warning you to leave.

Several travelers to Labette County had mysteriously disappeared, and then there were the bodies. In 1871, the corpse of one traveler was found in a fishing hole. The winter of 1872 saw the discovery of two more such corpses. All the bodies had slashed throats and crushed heads. Was a fiend loose in Kansas?

Father Paul Ponziglione felt apprehensive when he made his rounds in southeastern Kansas. He was carrying substantial funds that he had collected for good works. Many of those gone missing also reportedly carried large amounts of cash. Father Paul was no stranger to the danger of his parishes, as the countryside abounded with various ruffians, but this threat felt different. Tired and hungry, he stopped at the inn operated by an amiable German-American family, the Benders. 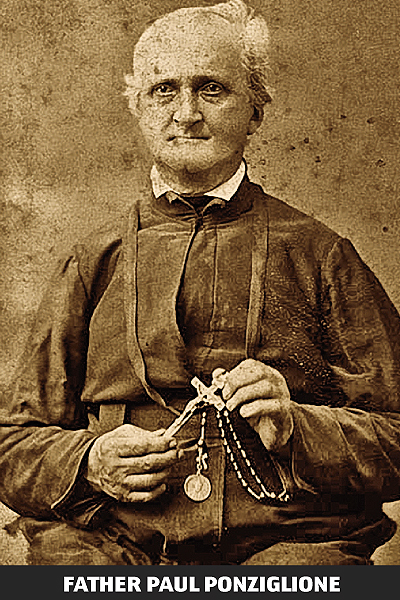 nd repose at their farmhouse. The family consisted of the Bible-obsessed patriarch, John, his wife, son John and daughter Kate. The stunningly beautiful 24-year-old daughter advertised herself as “Prof. Miss Katie Bender,” a faith healer who communed with spirits. Both Kate and Ma Bender were considered by some to be witches, and stories of them cavorting naked probably helped their business.

Witches were not on Father Paul’s mind as he entered the modest inn. The priest was warmly offered a seat near a soiled canvas sheet that the family used to divide the dining area from the rest of their home.

Something in the way the wind moaned outside gave the priest the frights. He noticed Pa Bender quietly move an iron hammer behind the canvas, as Pa whispered to Kate. Their features became stern and ominous.

Listening to his higher power, Father Paul excused himself to check on his horse. Once outside, he mounted the steed and galloped off into the night. He was certain that he had been delivered from danger.

The priest was right. He had evaded the Bender family that indulged in mass murder for profit. They waited patiently for single travelers, with some prospect of money on their persons, to fall into their clutches. While at the dinner table or at some opportune time, one family member distracted the intended victim while another smashed the unfortunate in the back of the head with an iron hammer. The stunned victim was finished off by drawing a sharp knife across the throat. The family hid the bodies in a cellar beneath the inn’s trapdoor until the bodies could be disposed of later on.

Father Paul was not the only intended victim who had escaped by listening to his inner voice. At least two more such close calls came to light after news about the Benders circulated.

The undoing of the Benders came in early 1873. Dr. York had arrived to examine a horse and buggy found abandoned near Fort Scott. The doctor had sold them to George Loncher a few days previous, and George and his daughter were now missing. Dr. York took up lodging in the Benders’ inn and never made it home. But he was far too important a man to not attract attention.

When the doctor did not return, his brothers Alex and Col. Ed York assembled a search party to find him. At the Bender inn, they were informed the doctor had stopped for victuals and moved on. Kate offered to use her powers to find Dr. York for a fee of $500. Young John made up a yarn about ruffians in the area. The searchers continued down the road. When they returned, two days later, to question Kate further, no one was home.

In early May 1873, the neighbors noticed that the Bender place looked deserted. They entered the property and found abandoned animals and a messy house. Leroy Dick, a Civil War veteran, detected the unmistakable stench of a decomposing corpse. The smell from the cellar was overpowering.

The next day, the neighbors showed up with a plow and shovels. They dragged the house off its foundation and inserted iron rods to probe for recently excavated earth. Ed thought he could make out graves in the orchard. To everyone’s horror, they uncovered the graves of at least 11 individuals, including the recognizable corpses of Dr. York and George Loncher. All save George’s daughter had been killed by a blow to the head and a cut throat. The daughter looked as if she had been strangled; some speculated she was placed in the shallow grave under her father’s corpse while still alive.

An immediate manhunt began for the “Bloody Benders.” The state put a bounty of $500 on the heads of each Bender. The trail went cold quickly. Bender sightings were reported in Texas, Michigan, New Mexico and other places. Rumors circulated that bounty hunters had killed them, but pocketed the tens of thousands of dollars the fugitives took with them rather than settle for the $2,000 offered by the state. Further gossip had the Benders getting caught and using the blood money to purchase their freedom.

The true fate of the Benders is unknown. Some say the proprietors of the Devil’s Inn are still out there, looking for their next mark. “Welcome stranger.”