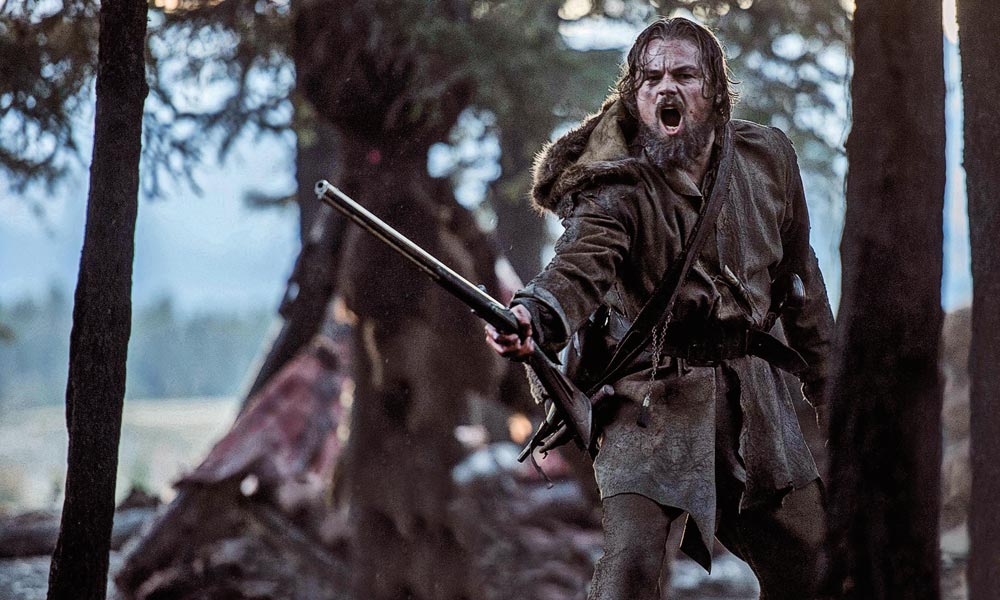 Leonardo DiCaprio took on his stiffest test yet, emoting most of his character through actions rather than words, in Director Alejandro González Iñárritu’s The Revenant, a stark tale inspired by Hugh Glass’s journey of survival in 1823. Nominated for the fifth time, DiCaprio won his first Oscar for his portrayal of Glass. The Revenant also earned golden statues for Iñárritu, best director, and Emmanuel Lubezki, best cinematographer.

The film charted the harrowing ordeal that Glass faced after being badly mauled by a bear and left for dead by the other members of his team. DiCaprio endured icy river waters and subzero cold during the nine-month shoot, most of which took place at the southernmost tip of Argentina. He was game to portray the challenges posed by the elements and the terrain; he even chomped into bison liver.

“The main nemesis was the weather and the freezing temperatures,” DiCaprio says.  “It was always a struggle to stay warm enough and not suffer hypothermia and also to eat enough so that we could keep going in those conditions. It wasn’t pleasant, but we decided that we had to go into the freezing waters because that was the kind of realism we were striving to portray…I wouldn’t eat the bison liver again, though!”

He pushed himself to fully get into his role as Glass. “I decided not to cover any of my fingers because I wanted to manipulate my environment,” he says. “And, of course, I ended up crawling through miles and miles of snow-covered landscape…. It’s those decisions early in a film that come back to haunt you.”

That frigid environment helped DiCaprio figure out the poetry of his character. “Being out in nature for that long is an existential journey,” he says. “The story, by and large, is very linear: a man gets screwed over and loses his son and then he goes to attack the dude who screwed his life up.”

He did have a limit when it came to the bad weather. Production shut down on November 29 and did not resume until January 19. “We were supposed to do a scene with my son [played by Forrest Goodluck] as he’s praying for me,” he says. “And the temperature hit 40 below zero. At that point, we couldn’t really open our eyes. And our fingers locked together and the camera gear locked together, and I just looked at Alejandro and said, ‘I’m all for enduring realism, but there comes a point when nothing is operable.’”

DiCaprio connected to this period of history, when capitalists were extracting natural resources, sacrificing different cultures over their greed. “This whole era of American history is undocu-mented, so, in a lot of ways, it was like doing a Science Fiction movie and reconnecting with a part of America that wasn’t yet America, but very much like a lawless territory where you had French and English fur trappers and indigenous native people, fighting over these resources,” he says. “We had to piece together what this world would be like and how these characters would interact, but at its core, the movie is obviously about the relations between man and nature.”

“The theme of man vs nature, revenge, the perseverance of life, what a man draws on to survive, our ability to adapt,  what we hold onto, what drives us—these are all themes we wanted to explore while we were there,” DiCaprio adds.

DiCaprio thrived on the limited amount of dialogue. “That really was one of the most exciting parts about the project,” he says. “When I read the script, I kept urging Alejandro to take out more lines. I wanted less dialogue because that was the exploration of this character. Actually, Hugh Glass is a man who does not mince words; he gets straight to the point, and I don’t think he necessarily wants to communicate with that many people. But staying silent for so long, even for such a man like Hugh Glass, is a real challenge. And that was a challenge as I had to make the story come alive, just through his eyes.”

The bear attack is the scene that got everyone talking about the movie. “I don’t want to give away all the details about how we shot the scene, but I was never in any danger….We rehearsed the scene for several months and studied tapes of over 100 actual bear attacks to know how we should do it,” he says.

He gives the director credit for creating such a powerful scene: “Alejandro allows the audience to [experience] a very raw violent savage bear attack, yet feel the intimacy of both man and beast. You feel the sweat and the heat coming off of the animal.”

DiCaprio grew as an actor during the filming of The Revenant. “Every single day of this movie was difficult. It was the most difficult film I’ve ever done,” he says. “You’ll see, when you see the film—the endurance that we all had to have is very much up on the screen.”