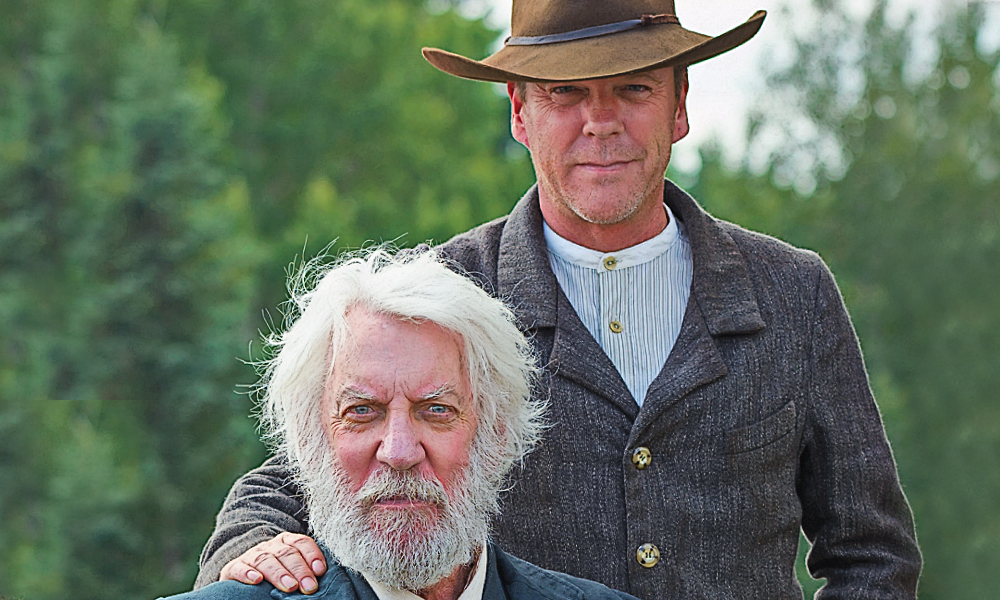 This was a film that I’ve been dreaming of making for 30-some-odd years,” Kiefer Sutherland told the audience when Forsaken premiered at the Autry Museum of the American West in Los Angeles, California. In Forsaken, he is directed by his cohort from Fox’s 24, Jon Cassar, who remembers, “We worked together for almost nine years. Between set-ups, we always talked about the kind of movie we’d love to work on together. And he always wanted to do a Western.”

Considering their previous success with 24, for which they both earned Emmys, you might expect a high-tech, edgy Sci-Fi Western from the pair. But you would be dead wrong. “I was taking a chance,” Cassar admits, “looking backwards rather than forwards with the Western.”

Kiefer plays John Henry Clayton, a Union soldier coming home from the Civil War. But he has taken a decade to return, years he spent as a gun-for-hire. He gives up the guns, but arrives home to find his mother dead, his father, Rev. Clayton (played by Kiefer’s real father, movie icon Donald Sutherland), unforgiving and the love of his life, Mary-Alice Watson (Demi Moore), married and a mother.  The hometown where he planned to settle down is under attack by land baron James McCurdy (Deadwood’s Brian Cox), whose gunmen are systematically driving out settlers who refuse to sell land so he can profit from the incoming railroad.

Cassar admits that Western movie lovers will find familiar themes in the story that has been developed over the years by Kiefer and scripted by Brad Mirman: “There are similarities to a million Westerns you’ve seen before. The land baron has been the villain of so many, but [the character so well] reflected the lengths these ambitious men would go to.”

“It was interesting to get those characters we’ve seen before and give them some sense of reality. We did that with an incredible script and with incredible actors,” Cassar says, from nervous townspeople to hired thugs, to an elegant, aging gunfighter exceptionally played by Michael Wincott.

Kiefer’s Western roots run deep. He earned his spurs playing “Doc” Scurlock in 1988’s Young Guns I  and in the 1990 sequel. He took a couple of years off from acting to become a rancher and rodeo cowboy, and not just for show: Kiefer and partner John English won the U.S. Team Roping Championship in 1998.

This isn’t Donald’s first rodeo either. In 1974, he was the title character in Dan Candy’s Law, a Mountie tracking a Cree fugitive. But Forsaken is the first time father and son have acted together in a film.

“My father is an actor who I’ve always wanted to emulate,” Kiefer says. “I’ve had such a deep respect for his choices in storytelling, for his unbelievable breadth that allows him to move from character to character, just seamlessly and flawlessly.”

“When you see two actors looking into each other’s eyes, father and son playing father and son, there’s something there that is magic,” Cassar adds.

That magic is particularly true in a scene with them alone in church, son telling father about the war, and his life since. “Even Donald cried in that,” Cassar says. “Donald said to me, ‘I had no plan to cry whatsoever. But it was my son, and he was so hurt. Even though it was a fictional story, it was hurting him. So to tell that story that emotionally, it got to me too.’”

Filmed in Alberta, Canada, Forsaken is a tight, focused 90 minutes. “There was a sizable [secondary] story, a wannabe gunslinger and his love—a parallel love story to Kiefer and Demi’s. Kiefer’s character was trying to end his life as a gun-for-hire, and this young man was excited to start one. They did a wonderful job, but I wanted to keep the story focused on father and son. Having to tell them that they were cut out of the film was very difficult,” Cassar says.

The timing of the release—Forsaken became available on DVD and BluRay on March 29—is more a matter of chance than of art. “We made this picture two years ago.  We had financial problems; it was sitting on the shelf for a while.  But it’s coming out when there are a bunch of other Westerns, which is fantastic,” Cassar says.

Cassar is proud of his non-CGI movie. “There are no phones, no computers.  It strips down your story to such basic elements that all the other ‘noise’ goes away. There’s a simplicity to Western storytelling that people are attracted to,” he says. “It really gets down to who the characters are and how they interact. Forsaken is a pleasing movie to watch, without all that noise.”

Charlie LeSueur, Arizona’s Official Western Film Historian, has been hosting a film series at Scottsdale’s Museum of the West. Most recently, this spring, his focus has been how a Western film reflects two eras: the time it portrays, and the time it was made.

His latest book, Riding the Hollywood Trail II, is about the great Western series and stars of early TV, including Hopalong Cassidy and Gene Autry.  Throughout the year, he travels the country to participate in Western events and film festivals—most recently in Old Tucson as emcee and webmaster for The High Chaparral Reunion.

He got his start in 1991, when the advertising firm he worked for was hired to promote Scottsdale’s first Festival of the West.  The guests included Laramie’s John Smith, bullwhip cowboy star Lash LaRue and Sugarfoot’s Will Hutchins. The festival operators were surprised he knew their work. “I didn’t go to school—I sat in the darkness of the drive-ins and the movie theaters, and I watched Westerns.  The next year, I ended up hosting half the Q&As,” LeSueur says.  He ran the event for the next 20 years. He admits to True West, “I’m living the dream!”

RUN OF THE ARROW

(Warner Archive, $21.99) Sam Fuller wrote and directed this man-without-a-country story about a Rebel (Rod Steiger) shamed by Confederate Gen. Robert E. Lee’s surrender. He runs afoul of the Sioux, but is honored when he survives their ritual “run of the arrow” and is made a Sioux by Chief Blue Buffalo (wonderfully played by Charles Bronson). Red Cloud then assigns him to oversee the location and building of a cavalry fort for the bluecoats he despises. This 1957 Western is wonderfully blunt.