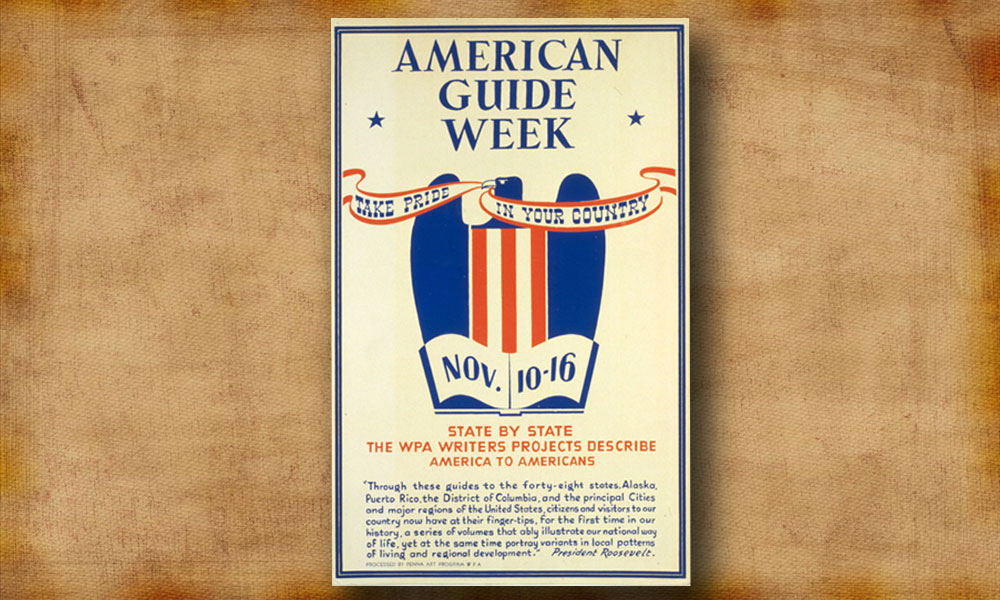 During the Great Depression of the 1930s, one of the New Deal programs was to pay writers to document the stories of everyday Americans. It was funded by the Emergency Relief Appropriation Act of 1935 under President Franklin Delano Roosevelt and was called the Federal Writer’s project.

The most famous—and controversial–of the publications were the 48 state guides known as the American Guide Series. Each contained detailed histories of the state with descriptions of every city and town, essays about its culture, a driving tour map and a portfolio of photographs.

Some 6,600 individuals—writers, editors, historians, researchers, art critics, cartographers, archaeologists and geologists—were employed. Not everyone saw this as a great idea, and conservative states worried the writers were too left-wing or pro-labor. Federal sponsorship ended in 1939, although some states continued funding the writer’s project until 1943.

What’s most important about that program is the stories it told that had never seen the light of day before. Most notably was the Slave Narrative Collection, more than 2,300 first-person accounts of slavery and 500 black and white photographs of former slaves.

There also were many stories of the pioneer days in the west. Including this account by an “old-time sour-dough” ranch cook: “We had meat at every meal,” he reported about the usual grub on the range during roundups. “A fat heifer was killed at sundown and hung outside to cool. Before sun up I cut off enough for the day’s needs, wrapped the rest in a meat tarp, and put it in the shade. After sundown I removed the tarp and hung the meat out again. It is surprising how well beef will keep when handled in this manner. Frijole beans, potatoes and hot biscuits were served at every meal. Lick [syrup] took the place of butter. Dried fruit cooked with plenty of sugar was the usual desert. Canned milk was bought in town. In those days coffee was called ‘Jamoka’. Tea was never used. The coffeepot was always busy when the punchers were at the ranch.”

And that’s the story, straight from the horse’s mouth!