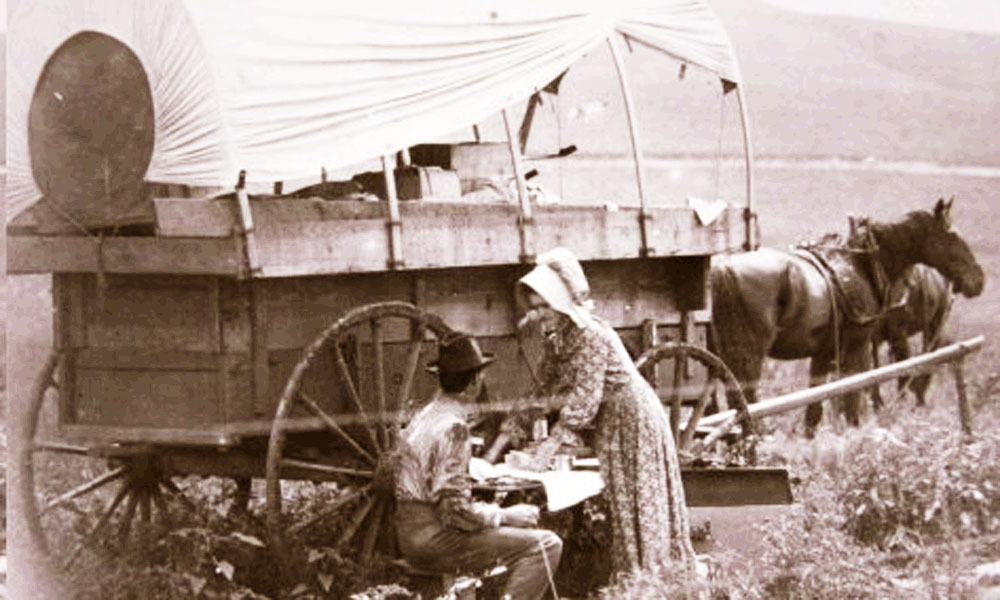 It took careful planning to figure out what food to take on a wagon train. Everything to feed a family for months—except game, which hopefully would be found along the way—had to jam in with everything else the family needed when they finally got to where they were going. Here’s the foodstuffs list from the 1850s:

–200 pounds of flour for each person over 10 years of age and 100 pounds for every younger child.

–100 pounds bacon for everyone over 10, with half that for tikes.

— 3 to 5 bushes of shelled corn for each family.

Besides that, every pioneer woman also carried a supply of yeast powder, lard, vinegar, dry beans, hardtack and a form of baking powder called saturates. Some carried a coop of chickens and most had a cow tied to the back of the wagon to provide fresh milk. Fresh butter was made every day—after milking, the churn was attached under the wagon, where the movement of the day churned it into butter by the end of day’s travels. And to add a little spice, pioneer diaries spoke of how precious luxuries like cinnamon, onion and garlic bulbs and coca powder were to otherwise dull meals.

Cooking was done in three main pots—a Dutch oven, a frying pan and a tea kettle.

And when there was no wood for a cook fire, children were sent out to find the biggest and driest “chips” on the prairie—buffalo dung.