Food Poisoning in the Old West 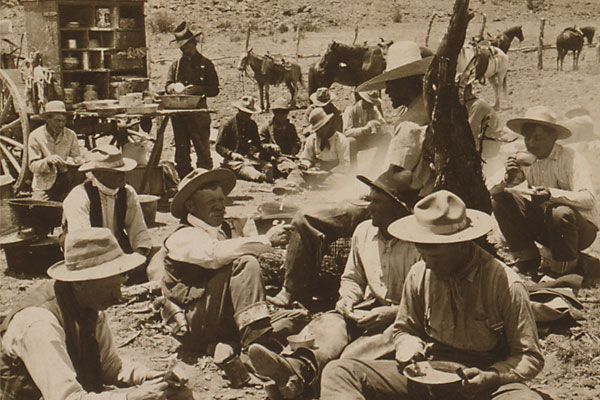 While watching our favorite Western movie or TV characters eat a sumptuous meal at the local boarding house, café or sitting around the old campfire, we almost never see them become ill, throw up or run to the privy within hours or a day or so after eating that rare beef steak with eggs over easy.

You can bet that in the real Old West such latter events were far from uncommon. Then, as now, food poisoning was a major potential problem when consuming food that had been undercooked, poorly preserved or contaminated by an unhygienic food handler.

Regardless of the source of poisoning, the unfortunately afflicted cowboy often said that he had contracted ptomaine (pronounced “toe-main”) poisoning. The online encyclopedia Wikipedia tells us that the term “ptomaine” is derived from the Greek, literally meaning “fallen body or corpse,” and it relates to nonbacterial substances (alkaloids) found in decaying animals and vegetation. Along with bacteria, these alkaloids can cause food poisoning; but the term “ptomaine poisoning” is no longer used in medical practice today.

In the Old West, before the days of mechanical refrigeration (other than the use of ice, when available), many foods had to be consumed within a matter of days or the risk of spoilage was great, especially in warm weather. Although the cowboy did not understand the microbiological causes of food poisoning, he certainly had, at least, some empirical wisdom that he applied, when possible, to protect himself. The cowboy was generally spared food poisoning because he made some effort to obtain fresh sources of food, cook them well, dry them out in the sun or salt certain portions that could not be consumed right away. The vigilant cowboy also avoided beef, chicken or game that smelled bad and was spoiled.

When hungry enough, however, the cowboy sometimes took chances that he regretted later.

Cowboys occasionally became ill from typical chuckwagon chow, when it smelled just fine. Let us examine several of the different ways in which our cook (let’s call him “Cookie”) could poison the wranglers under his care with the grub that he prepared on a daily basis.

For starters, Cookie could poison his flock by simply being Cookie. Cookie’s nasal passages, skin or mouth could be colonized with the bacterium Staph aureus, which he could shed, sneeze or spit into our poor cowboy’s food. This bacterium creates a toxin that actually causes the poisoning. In a matter of a few hours, our cowboy may develop extreme nausea, projectile vomiting and diarrhea. These problems can be quite severe and in some cases can lead to a very debilitating illness. There was and is no actual treatment for Staph food poisoning. Today we can provide IV fluid replacement and other supportive care; but usually the afflicted cowboy must simply endure his misery for a day or so.

Another manner in which Cookie could cause our cowboy to suffer was by preparing him undercooked eggs for breakfast. The cowboy may have even sampled uncooked cake batter or raw cookie dough, each containing raw eggs. After 24 to 72 hours, the poor cowboy could develop abdominal cramps, severe diarrhea and fever, all symptoms of poisoning by Salmonella bacteria. Interestingly, a related Salmonella bacterium, from a human reservoir, is the cause of the notorious “typhoid fever,” a dreaded scourge of the Old West that killed hundreds, if not thousands of people.

If Cookie served our cowboy his steaks “bloody,” and the butchered meat was contaminated with fecal material from either the cattle or the cook, the cowboy could have developed food poisoning from Shigella or E. coli bacteria. Both disorders present with symptoms and onset similar to Salmonella poisoning with some notable exceptions. The Shigella bacterium is so invasive into the lining of the intestines that it is typically characterized by bloody diarrhea. After five to 13 days, certain strains of particularly aggressive and invasive E. coli can cause the destruction of red blood cells and kidney failure leading eventually to the poor cowboy’s demise. Today, these diseases, including Salmonella infection, can be treated aggressively with antibiotics and other supportive care.

If Cookie served the cowboy undercooked poultry, he could have become afflicted with Campylobacter bacterial infection, a relatively short, self-limited diarrheal disease. Sometimes this type of poisoning could (and still can) be transmitted if Cookie contaminated the cooked chicken while using utensils or the cutting board tainted by the raw chicken meat. Today, Campylobacter happens to be the most common cause of diarrheal food poisoning in the modern West and throughout the rest of the country. This disorder can be treated with antibiotics; but by the time a diagnosis is made, symptoms have often disappeared.

If Cookie served our cowboy under-cooked pork, bear or moose meat, he could have developed Trichinosis, after about one to four weeks. This malady is a disease with gastrointestinal symptoms followed by muscle inflammation and swelling around the eyes, all caused by tissue infestation with the larvae of the infected animal’s roundworms! Today, as part of his clinical workup, the poor cowboy may need to undergo a muscle biopsy to find the parasites living in his tissue.

In addition to the methods mentioned above, Cookie could have poisoned our cowboy in dozens of other ways, not only by food but also by water. Cookie, for example, may have drawn the water for his stew or washed his cooking utensils downstream from a beaver dam and, thereby, served our cowboy a potent helping of Giardia parasites. Believe me; this infestation would have given him diarrhea for a very long time.

Speaking of water, no survey of food poisoning in the Old West can fail to mention probably the most dreaded agent of all—the bacterium Vibrio cholerae, the source of cholera. Ingesting this bacterium in contaminated food or water could result in a massive diarrheal disease that could kill a previously healthy cowboy within hours. This disease killed thousands in the Old West and is still feared today, particularly as an epidemic potential in disaster areas where water supplies are contaminated, usually, with sewage. Treatment of cholera, today, involves the oral or IV replacement of electrolytes and the use of antibiotics. Interestingly, the 11th President of the United States, James K. Polk, died of cholera in Nashville, Tennessee, on June 15, 1849; and this scourge may have also contributed to the death of our 12th President, Zachary Taylor, on July 9, 1850, in Washington, D.C., a few days after the president consumed a large quantity of cherries and iced milk.

The above examples provide a relatively brief tour of a few important types of food poisoning that afflicted the Old West and that still lurk today. Since I have omitted several other ways to ruin your next meal (including Botulism and mushroom poisoning), I think that I will have more to say about Cookie and his capers (no pun intended) in future articles!

I want to emphasize that in the modern West, as elsewhere in the country, we have not escaped the problems of food poisoning, either as individuals or as a community. According to U.S. Public Health Service estimates, today, about 76 million persons acquire some form of food borne illnesses annually. These illnesses lead to about 325,000 hospitalizations and about 5,200 deaths, usually among persons who are pregnant or suffer some form of deficiency in their immune systems.

It is not uncommon to learn about large-scale recalls of meat contaminated with E.coli. As I prepare this article,
the USDA, on February 17, 2008, ordered the largest recall in U.S. history. This recall of 143 million pounds of hamburger (from the Chino, California-based Westland/Hallmark Meat Company) affected thousands of school lunch programs. The recall was based upon suspicion of animal abuse that permitted unfit, non-ambulatory cattle to go to slaughter after passing USDA inspectors.

In the Old West, we can only speculate about comparable statistics. There were probably no recalls; and certainly, if they did occur, they would have affected only local slaughterhouses. No U.S. governmental agencies, in the latter part of the 19th century, were dedicated to protecting the food supply. In 1906, President Theodore Roosevelt passed the original Food and Drugs Act, along with a version of the Meat Inspection Act that was aimed at protecting the American diet.

This 1906 legislation was probably enacted in response to the scandalous revelations about the Chicago meat packing industry depicted by Upton Sinclair in his famous novel, The Jungle (1906). One unsubstantiated claim made by Sinclair was that some workers actually fell into meat processing tanks and, along with animal parts, were processed and then sold as “Durham’s Pure Leaf Lard!”

Given the conditions on the frontier, I do not doubt that the real-life, early West cowboy hero shown on the TV or silver screen spent more time throwing up into a barrel, rushing to the privy or the nearest stream than has ever been depicted for our viewing pleasure.

Regardless of the warnings related to those nasty beef recalls, I think that, for the most part, the cowboy of today, like most of us, has learned to place a bit too much trust in the grub bought in the modern grocery store or served on the ranch from the back of an SUV.

Perhaps poisoned once or twice by Cookie’s capers, our old-fashioned cowboy probably had acquired a sharpened common sense and frontier acumen when it came to eating his fare. This intuition may have spared him from contracting food poisoning a bit more often than his naive counterpart of today, who may stop without hesitation at the nearest fast food joint to consume an “about to be recalled” hamburger.