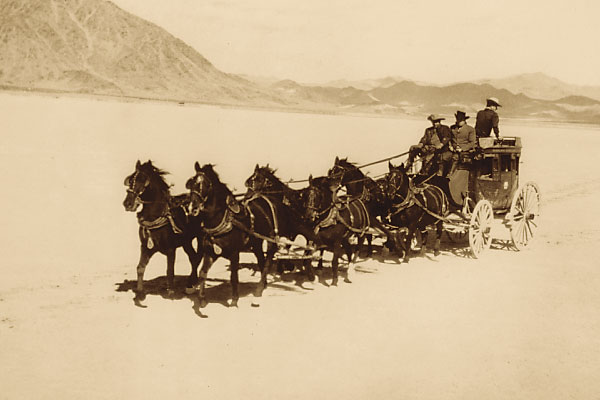 At any moment, I know—I can feel it—that I’m about to be attacked by a tribe of plein air painters!

Oops. There goes that stillness, and here comes the dust as a truckload of tourists kicks up red earth, coating my wife’s white Saturn Vue—she let me take it on this trip—with the same beautiful dirt director John Ford made his own.

Monument Valley Tribal Park, run by the Navajo Nation, turns 50 years old this year. Go figure. Where I stand, I would have guessed she’s only 50 million years old. The Visitor Center is closed for remodeling—the appropriately named View Hotel is scheduled to open later this year. The tours, whether you book a Navajo at the park or try Goulding’s Lodge across Highway 163, are pricey. The wind can blow mighty hard. Yet the park is packed with tourists—painters, photographers, hikers, cyclists, nature lovers and a whole lot of movie buffs—from across the globe.

Clint Eastwood filmed parts of The Eiger Sanction in Monument Valley, and the valley’s sandstone towers, rising 400 to 1,000 feet off the desert floor, have also served as backdrops in movies from historic Easy Rider to wonderful Thelma & Louise to dreadful Wild Wild West. But the land the Navajo call Tsé Bii´ Ndzisgaii (Valley of the Rocks) is mostly identified as John Ford’s West: Stagecoach, My Darling Clementine, Fort Apache, She Wore a Yellow Ribbon, The Searchers, Sergeant Rutledge, Cheyenne Autumn.…

By most accounts, Harry T. Goulding, a sheep trader who established a trading post here in 1923, turned Monument Valley into West Hollywood when he brought some photos of the picturesque landscape to California in attempt to lure filmmakers to his country. He sure got Ford’s attention.

Those majestic buttes called the Mittens might be one of the most recognized landmarks in America. Impressive as they are through Ford’s lenses, they are even more spectacular in person. They’re even better than Capt. Nathan Brittles’s quarters (from She Wore a Yellow Ribbon), originally a potato cellar at Goulding’s post turned into a movie set and now part of a museum catering to tourists.

The 17-mile dirt road through the tribal park takes visitors through sweeping country. Wait a minute! Are those troopers from Fort Apache riding up near John Ford’s Point? No. Just more tourists, although I think the view from horseback might be better than the view from truck or jeep. I’ll stick to the Saturn Vue, especially with The Searchers’ soundtrack providing mood music.

…Did Western film directors, such as Anthony Mann, Howard Hawks and Budd Boetticher, stay away from Monument Valley because Ford had established it as his own?

…And what will my wife say when I ask her never to wash my Monument Valley dust off her white SUV?

Okay. I know the answer to that last one.