New Kid on the Block 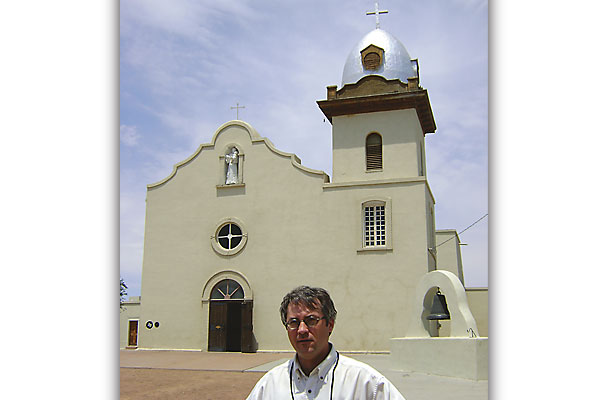 El Paso, Texas, is a city with a past—far more of a past than most communities in the West can claim.

It’s belonged to three countries and has a downtown plaza with an amazing number of intriguing buildings.

But during the last 20 years, we could have forgotten all that, as El Paso’s downtown pretty much went the way of neglect. Grand buildings—including the Plaza Hotel where actress Liz Taylor once lived—changed purposes, got boarded up and generally sat in the Texas sun, getting old and forlorn.

Then a 36-year-old hotshot best known as “Dr. Troy” came to town, and now El Paso’s past is becoming an important part of its future.

Hired a year ago as El Paso’s historic preservation officer—a position that has been empty for nearly two decades—Dr. Troy Ainsworth has been working with the city council, a nine-member advisory board, the business community and citizens to pump new life into a city he says he’s fallen in love with.

“I left Fort Worth to come here,” says Dr. Troy, as though that act says it all about his faith in El Paso.

In a way, it does. Fort Worth is a community that has undergone major restoration. “Thirty years ago, it was dismal, but what’s happened there is extraordinary and a great model for us,” Ainsworth says. Besides that, he admits, with prodding, many people familiar with Texas would prefer living in Fort Worth to El Paso—at least today—but he says he’s out to change all that.

“I’m pretty much creating a new office here,” he says. “Historic preservation has lain dormant in El Paso for about 17 years, so we need to build the effort almost from scratch. But we have a good inventory of buildings and a lot of people who care.”

Reviving the city’s focus in historic preservation began as a grassroots effort led by lifelong residents. They got the ears of city council members, who decided “it was time to act rather than stand by and be idle,” Ainsworth says.

He took the job in April 2007 and began assessing what the city had and where it stood. He was surprised at what he found. The El Paso area had first been settled by Spanish explorers in 1598, and later became part of Mexico. Texas didn’t claim El Paso until 1848, but growth really started with the arrival of the Southern Pacific Railroad in 1881 and downtown was built from then until the 1930s.

Downtown includes about 100 buildings, more than you’d expect to find in most Texas cities, and several were designed by renowned architects such as Henry Trost who studied with America’s iconic teacher Louis Sullivan (he also taught Frank Lloyd Wright).

“El Paso has some of the most intriguing architectural buildings in the Southwest,” brags Ainsworth, noting the city’s buildings have a “great amount of Spanish” influence and “a lot” of Mediterranean, and include Pueblo-Revival, Prairie and American Foursquare architectural styles.

Thirty buildings are already listed on the registers for historic sites, and Ainsworth quickly identified a “like number that, if they were restored, could be historic sites.” He hopes he can inspire property owners to aim for restoration.

“We have a lot of people who want more office space in downtown El Paso,” he says. “We have people who want
loft apartments and eating-drinking-entertainment establishments, and the buildings for all that already exist. We have four-, five-, six-, eight-, 10-story buildings, and only the first floor is used. Look up—it is there. Maybe it doesn’t look so great right now, but you can see, as they say, that ‘they don’t build them like they used to.’”

The good news is that while many of those buildings are “not quite mothballed, but pretty darn close,” Ainsworth also notes “most can be reversed” and get new life through what urban renewal calls “adaptive reuse.” The El Paso City Council is passing new tax incentives to help move restoration along.

Asked his biggest dream, he doesn’t hesitate: “The complete restoration of downtown buildings that celebrate our unique heritage and the architecture of Henry Trost, and uphold our unique spirit of place.”

Besides downtown, he also has his eye on the A.B. Fall Mansion, once owned by the former secretary of the Interior whose name and actions inspired the phrase “fall guy.” Preservationists have nominated the home to a list of endangered historic sites in hopes of raising money to save it. Dr. Ainsworth is right there with them.

Although only in the job a year, he’s already got fans, including El Paso’s chief building inspector Tom Maguire. “Dr. Troy is a very good communicator, and he’s a pretty reasonable person. He’s not a fanatic, but is enthusiastic, and he’s been well received.”

For himself, Dr. Ainsworth has bought a 1921 bungalow not far from downtown, where he’s “putting down roots” in a town he hopes will someday be a showplace of beautifully restored historic buildings to make Texas and the entire Southwest proud.