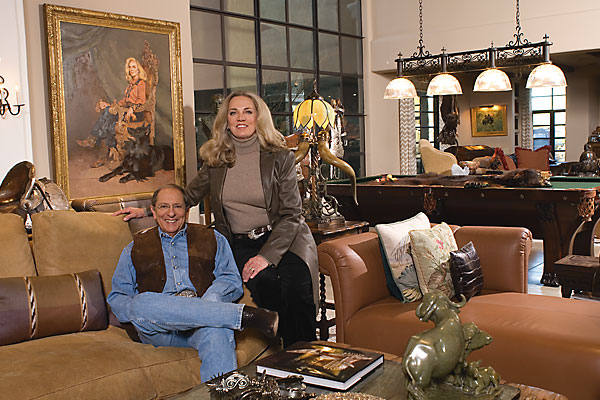 Buffalo and longhorn cattle are icons of the American West. But then so are boots, saddles, chaps, spurs and guns, and for Mort and Donna Fleischer, that cowboy gear is not only a true art form of the West, but also their passion.

Not every couple exchanges the kind of Christmas presents Mort and Donna share. Several years ago, she gave him a buffalo—Tanka. “The next year for Christmas, he bought me a miniature brahma bull,” Donna says.

Admittedly, Donna is the animal lover in the family, and she liked the idea of raising a buffalo. “I think they’re fascinating,” she says. “We live in a rural area. I figured I’d get it for him; that way he wouldn’t shoot it.” Smart woman.

Several other pets are part of the Fleischer family, including the longhorn steer Earl, named for the man who sold the bovine to Mort, plus Ingrid, a miniature goat, and Tessie, a miniature horse. The couple also raises cutting horses, which Donna has ridden competitively.

But their home near Scottsdale, Arizona, is better known for other collections than for their animals. The Fleischer home features historic saddles—Mort’s pride and joy—100 pairs of chaps and another 100 sets of spurs, bits and other cowboy gear, guns and other weapons, while the walls feature California and Russian Impressionism art.

Mort, whose saddle collection was featured in B. Byron Price’s The Art of the Western Saddle, owns a saddle that was created for Emperor Maximilian of Mexico, circa 1864, and another built for Buffalo Bill Cody by Collins and Morrison in Omaha in 1893. He houses them all in the stable.

The saddles “are like a history of the West,” he says. “My wife and I think they are the great true art forms of the American West.” The stable houses a range of saddles dating from an 1840 Texas-style stock saddle and an 1850s-era, California-style saddle to silver-mounted parade saddles. Among the makers: Don King, Jack Kelly, Frank A. Meanea, Visalia Stock Saddle Company, Hamley and Company, Frank H. Coenen and Edward H. Bohlin.

As you walk throughout the Fleischer home, you’ll spot horsehair bridles and ropes plus chaps made by R. T. Frazier, E.L. Gallatin, M.L. Leddy and Miles City Saddlery. The spurs you see range from a pair of wrought-iron Spanish colonial, circa 1650, to those made by inmates at the Colorado State Penitentiary, plus those made by 20th-century makers such as G.S. Garcia and J.R. McChesney.

You step through a functioning bank vault door, dating to the early 1900s, to view the Fleischer’s Western memorabilia and gun display. Within you will see the outstanding collection of holsters, spurs, bits and chaps plus antique Winchester rifles, Colt pistols and hunting rifles—an array of weapons in use from the 1850s to the current day.

“I have two rules for collecting,” Mort says. “First rule is you’ve got to really love it. Second rule: Get it at the right part of the cycle.”

Mort began his collection by buying California Impressionism paintings, but when they “started getting pricey,” he switched to Russian Impressionism artwork. Eventually, he began collecting Western memorabilia, including art. Among his art collection is View from Maricopa Point Grand Canyon by Hansen Puthoff, Lion at Lionne, a sculpture by Louis Riche, and In the Orchard, a painting by Joseph Raphael.

All of their collections—from the art and gear to the animals—are housed at Mor-Do Ranch, located in the center of a parcel of about 11,500 acres adjacent to Scottsdale, but in Maricopa County, bounded by the Tonto National Forest and McDowell Mountain Park. The view from their home takes in Four Peaks and the Mazatzal mountain range. While the name of their ranch comes from the first letters of their names—Mort and Donna—Mort readily jokes that it is also because they need “more dough” to keep up the place.

He began collecting in the late 1980s and says, when the “art began to get more mature,” he built the horse ranch. Then he began “thinking about saddles and stuff that would go with it.”

“We developed a whole lifestyle around art, both the paintings and the Western memorabilia,” Mort says.

They patterned their Arizona ranch home after the old Argentinean-style estancias (ranches), which borrow design elements from Spain, France, Italy and England, because “we just liked it,” Mort says. “Mostly that sort of thing is emotional. My deal on picking architecture, it’s a feel thing,” says Mort, adding the architectural choice “didn’t fall down out of the sky; it came out of the bookstore.”

The great room is a feature of the Argentinean estancia and a place Mort and Donna particularly enjoy due to its high ceilings, oversized fireplace and ample living space. Here the truly old meets the vintage Old West, with 17th-century bronze sconces on the fireplace, an English Tudor library table, an English saddle, circa 1820s to 1830s, and the original Frederic Remington sculpture, The Rattlesnake.

Passing down the hallway toward the master suite, you will see 17th-century Spanish Colonial iron works like kitchen utensils, buffalo scales and bits, as well as a piece of armor complete with a dent made by a bullet. In the turn-of-the-20th-century vitrene, Donna keeps her collection of mother of pearl items: glove stretchers, opera glasses, fruit knives, sewing kits, writing sets, poker chips, eating utensils, clocks, buttons and cigar clippers.

In addition to her love of animals, Donna is a trained horticulturist, which is evident in the home’s beautiful koi pond, greenhouse and extensive gardens. In that great outdoors run kittens and dogs, desert tortoises and lovebirds, not to mention the newest member of the pet family—a baby fallow deer named Quincy.