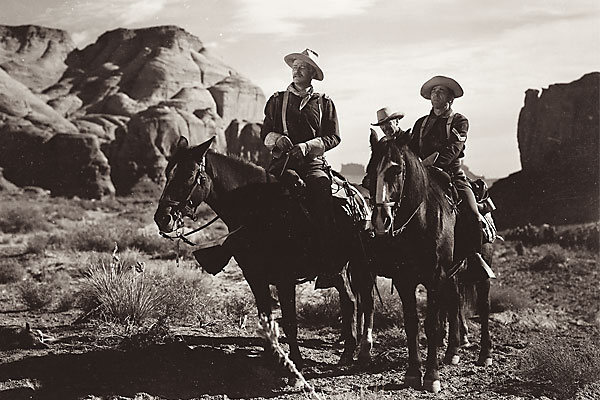 Western lovers who think of themselves as the last of a dying breed have to be feeling a little less lonely these days, as there are so many Westerns dropping into the DVD market.

You’ll find B-Westerns, singing cowboy Westerns, silent Westerns, TV Westerns, Spaghetti Westerns and classic adult Westerns, and some of them are getting the full-out treatment with scholarly or insider commentaries, in-depth documentaries, restored visuals and digitally dolled-up audio tracks. A recent release of Henry Hathaway’s less than stellar Garden of Evil (1954), for example, starring Gary Cooper and Susan Hayward, actually has a stand-alone musical track so that fans of composer Bernard Herrmann can listen to his score without being bothered by the inane dialogue.

Most recently, Fox Home Entertainment made their 21-disc, $300 Ford at Fox box set the most prestigious and handsomely mounted package in the current DVD world, and while it contained only a handful of actual Westerns, John Ford’s status as the most important Western film director in film history put Fox squarely on the side of the angels.

Companies like the Oklahoma-based VCI, which manages, with Kit Parker, the catalogue of legendary B-picture producer Robert Lippert, continues to issue fine single, double and triple editions of some of the better low budget post-war adult Westerns. And more than one company is devoted to restoring and releasing Spaghetti Westerns, the good, the bad, the ugly and, occasionally, the great.

It’s a good time to be a Westerns film fan.

Of course, producers do sometimes miss the boat. Many unexhumed classics and unrealized collections beg for the total bells & whistles treatment; we’re still waiting for the Budd Boetticher/Randolph Scott box set, finally due this fall, and we could use a  Sam Peckinpah TV package that bundles his brilliant series The Westerner together with The Losers starring Lee Marvin and Katherine Anne Porter’s Noon Wine. Every step backward, though, does seem to be met by one or two steps forward.

Here’s a handful of the best, the brightest and shiniest DVD collections and packages, mixed in with a few funky cinema favorites.

1. There’s no way around it—the Duke comes first.  I would have liked to start this list by suggesting one single comprehensive John Wayne DVD box set, but the fact that I have to name two only goes to prove how big Wayne was.

The John Wayne Western Collection (Paramount) is the smaller, Western-only brother of an even larger collection. It includes John Ford’s masterful The Man Who Shot Liberty Valance, The Shootist, Wayne’s final picture, and fully loaded special editions of True Grit, Hondo and McLintock!

2. As good or better is the John Wayne/ John Ford Film Collection (Warner), which contains a two-disc edition of Stagecoach, two of the three cavalry movies Wayne made for Ford, Fort Apache and She Wore A Yellow Ribbon, and the movie many, including Wayne, regarded as his best work and one of the greatest Westerns of all time, The Searchers, which is presented in a spectacular two-disc edition with all kinds of goodies.

3. After John Ford, it’s perfectly reasonable to think of Sam Peckinpah as the second most important director of Westerns. Even though his camp, and Ford’s, were separated by time and sensibility, the two had a great deal in common. Sam Peckinpah’s Legendary Westerns Collection (Warner) is where you find every genuinely great movie Peckinpah ever made.  The Wild Bunch and Pat Garrett and Billy the Kid are double disc editions with all the trimmings, and you’ll enjoy additional extras on Ride the High Country and The Ballad of Cable Hogue.

4.  In the seven-year gap between Ford’s The Man Who Shot Liberty Valance (1962) and Peckinpah’s The Wild Bunch (1969) came the Spaghetti Western, and Sergio Leone will always be the director whose name is most closely associated with the subgenre. The Sergio Leone Anthology (MGM) contains brilliantly remastered and annotated double-disc editions of, in chronological order, A Fistful of Dollars, For a Few Dollars More,  The Good, The Bad and The Ugly and the thoroughly peculiar Duck, You Sucker, which was the only one of the four that didn’t star Clint Eastwood. The only possible complaint one might lob at this wonderful collection is that it screams for the inclusion of Leone’s final Western, Once Upon a Time in the West.

5.  In a perfect world, the five Westerns that James Stewart made with director Anthony Mann would be available in a single collection, and it would include all of the scholarship and miscellaneous extras that pictures like The Searchers and The Wild Bunch have received in their DVD editions. The next best thing is this James Stewart: The Western Collection (Universal), which compensates for not offering The Man From Laramie and The Naked Spur by adding Destry Rides Again, Night Passage and The Rare Breed.  The Mann Westerns that did make the set, Winchester 73, Bend of the River and The Far Country, are three of the best Westerns—and best Jimmy Stewart ­movies—ever made, and having them available in a single package is nothing to sneeze at. The extras include a full length voice-over interview with Stewart that was originally recorded for the laserdisc edition of Winchester 73.

6. After Leone’s Clint Eastwood movies made the former TV actor an international star, Eastwood continued to return to Westerns for some of his best work over the subsequent decades. A couple of box sets feature his post-Leone Westerns work, and one of them, Clint Eastwood: Westerner (Warner), combines three of the best, The Outlaw Josey Wales, Pale Rider and his Oscar-winning, revisionist Western, Unforgiven, which is in a class by itself.  Although bigger and more comprehensive two-disc editions of Unforgiven are to be had, this is a fine triple bill, and a nice companion to the Leone box set.

7.  David Milch’s HBO series Deadwood (HBO), which ran for three seasons, made some Westerns fans uncomfortable, largely because of its unapologetically adult, de-and-re-mythified view of the Old West. But for those less easily discomfited, Deadwood stands as an eccentric masterpiece that turns many of the conventions of the traditional Western on its ear, and with a great deal of affection.  Hate it or love it, there’s no denying the talent of the actors and the writers, or its brilliant serpentine oddness. All three seasons are available as box sets, and they all contain a wealth of fascinating extras and interviews.

8.  Lonesome Dove, and the string of made-for-TV Westerns starring Tom Selleck and Sam Elliott, are what Western fans were watching when big screen Westerns were few and far between, and most of these were either very good or great.

Lonesome Dove is in a class by itself, even in the context of all the other Lonesome Dove spin-offs, prequels and sequels, and the six-hour miniseries is available in its entirety as a two-disc set (LionsGate). The DVD set will be released in blu-ray format this August (Rhi/Genius Products).

The Tom Selleck Western Collection (Turner) contains three solid pictures, Monte Walsh, Last Stand at Saber River and Crossfire Trail, and two of the three were directed by Lonesome Dove’s Simon Wincer. DVDs you may want to add to this collection is the Louis L’Amour two-part film The Sacketts, starring both Selleck and Elliott, which was loaded with great Western character actors, and its follow-up, The Shadow Riders.

9.  Fans of the top-tier TV Westerns will always debate the merits of their favorites. Some insist that Gunsmoke reigns supreme, others grew up on Bonanza, The Rifleman, Wanted Dead or Alive, Rawhide, Wagon Train, Maverick, The Virginian, The Big Valley and countless others. Most of these shows have been packaged in box sets of greater or lesser quality, and series like Rawhide and Gunsmoke have been treated pretty well overall, giving the fans what they want in measured doses.  For my money, Have Gun Will Travel (Paramount), which starred Richard Boone as an acerbic dandy with a fast draw and a talent for resolving thorny issues while dressed entirely in black, will always be the hippest of the pack. Three seasons can be had in the box set.

10.  The final slot in this top 10 list is reserved for all of the massive multi-DVD collections of public domain TV programs and films that are currently available at Amazon.com and other retail and Internet outlets. The quality of these box sets vary from middling to atrocious, but for a little more than the price of a couple gallons of gas, boomers can watch endless half-hour TV Westerns from the 1950s and ’60s—some obscure, others familiar.