A Bullet for Your Troubles 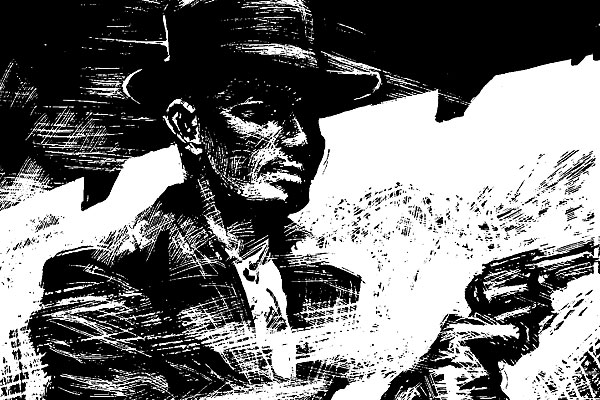 It’s cold, just after dawn in Colorado’s Brown’s Park area when Isom Dart comes out of his cabin, dressed heavy with long underwear, a couple of shirts and a jacket. That may protect him from the elements—but it won’t stop a bullet.

Dart is holed up with six of his friends; all believe they are marked for death by a gunman hired to—depending on your viewpoint—clear the area of rustlers or intimidate small ranchers into abandoning their land. Dart, a former slave, probably qualifies on both counts. He and others have gotten anonymous notes telling them to get out … or else. And they take the threats seriously. Three months earlier, their pal Matt Rash was shot dead in his cabin after receiving a similar message.  You might say everyone is nervous.

They finally go outside the next day. Dart’s body lies where he fell.  They make their way around the area. When they reach a section of fence south of the corral, they find a couple of .30-.30 rifle shells. Farther down, they discover horse tracks. They follow the trail, but not very far. The cowboys have no intention of running into the assassin.

See, they know who he is: a tall, athletic man with shifty black eyes and no sense of fear. He calls himself Hicks. But a number of folks already know that his real name is Tom Horn.

The Brown’s Park conflict was something of an extension of the Johnson County War. Big ranchers took on small cattlemen over control of land—in this case, large tracts of open grasslands in Brown’s Park.

The big boys, especially Ora Haley’s Two Bar outfit, allowed their cattle to roam into that area, even pushing on to some of the small ranches themselves. The upstarts responded by shooting some of the offending cows—or claiming them as their own. Haley and his cohorts were incensed and accused the small ranchers of rustling (and, in truth, a number of known outlaws roamed Brown’s Park). When the big ranchers became convinced that they wouldn’t find justice from law enforcement or in the courts, they took things into their own hands—and hired Tom Horn.

• Considered an excellent horseman and cowboy.

• Joined the Tip Gault Gang of rustlers in the mid-1870s. Lone survivor of an ambush by a ranch crew.

• Elected constable in Sweetwater County, WY, in 1884—receiving a total of eight votes. Defeated for reelection.

• Lived with the Bassett family of Brown’s Park for several years in the 1890s, despite having his own ranch. He became quite close with the famed Bassett sisters, Josie and “Queen” Ann.

• Acquainted with Butch Cassidy, Elzy Lay and other members of the Wild Bunch who were frequent visitors to the Bassett place. No evidence supports Dart ever rode with the outlaws.

• Accused of killing pal Matt Rash in July 1900 by the real assassin, Tom Horn. Nobody believed the charge—especially after Horn gunned down Dart.

It’s unclear what role, if any, Tom Horn played in assisting Lt. Charles Gatewood when the officer convinced Geronimo to surrender in 1885. But there was a definite connection in 1892.

Gatewood had been assigned to Fort McKinney near Buffalo, Wyoming.  Troops from there became involved in the Johnson County War when they were ordered to take the so-called “invaders” into a sort of protective custody. Probably as a result of that, the fort became a target for small ranchers and cowboys who wanted to “get” the mercenaries and anybody who helped them.

The invaders had already been moved when somebody set fire to the Post Trader’s building on May 18. The blaze spread. Gatewood was severely hurt while fighting the flames; the injuries forced his retirement from the Army six months later.

Three deputy U.S. marshals—including one Thomas Hale, a.k.a. Tom Horn—were sent out to arrest three cowboys in the case. But things didn’t go as planned; the alleged arsonists saw the lawmen coming and got the drop on them. Horn and his comrades were forced to dismount, disarm and leave the area.

Maybe that explains why Horn took to shooting folks from ambush.

An interesting sidenote—one of the suspected fire-starters was one Henry Smith. He began hanging out with an Eastern dude at the Occidental Hotel in Buffalo, telling the tenderfoot stories about the Old West. The dude, in turn, used that information when he wrote a novel about the Johnson County War. Owen Wister’s The Virginian is still considered a literary treasure.

On October 4, 1900—the day after he was killed—Isom Dart was laid to rest in an isolated spot on Cold Spring Mountain, near his cabin. The grave is still there, surrounded by a wooden fence in a grove of aspen trees, not far from North Highway 72.

The Two Bar Ranch, Tom Horn’s employer and one of the last great cattle empires in the U.S., was sold in 1911. In the mid-1960s, its headquarters and several buildings became part of the Brown’s Park National Wildlife Refuge. Most of those structures are still standing.

For Horn himself, no bad deed went unpunished.  Sure, he was never arrested or tried in the killings of Matt Rash and Isom Dart, but the reputation that came from those murders helped bring him down. On July 18, 1901, teenager Willie Nickell was shot from ambush near his home, northwest of Cheyenne, Wyoming. Horn was in the area at the time, and the assassination bore striking similarities to his modus operandi. Investigators immediately focused on him. Horn pretty much put the noose around his neck, drunkenly admitting to the crime to Deputy U.S. Marshal Joe LeFors (and a couple of stenographers) and then talking too much when he was under cross examination during the trial. Even though he recanted the confession, Horn was convicted and went to the gallows on November 20, 1903. More recent research into the Nickell murder—especially by Chip Carlson—indicates that Horn was innocent in that case. Tom Horn’s road to justice was a bit convoluted, but he finally paid his debt to society.

Blood on the Moon by Chip Carlson, published by High Plains Press; and The Bassett Women by Grace McClure, published by Swallow Press.