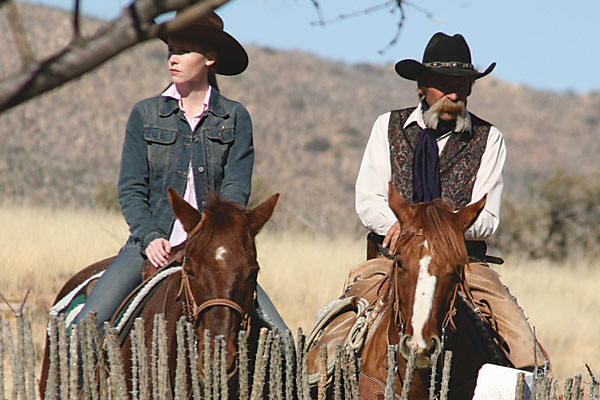 Anxiety welled within me when I saw a welcoming committee of border patrolmen outside of the ranch that we were about to film in Sasabe, Arizona, located one mile from the border of Mexico.

After a long day of filming, in the pitch black of the desert night, we had gotten a little lost. Fortunately we came across a couple of jeeps, off-road lights blazing and loaded with patrolmen standing watch. They were on the lookout for immigrants from Mexico who may illegally attempt to cross the border during the night. We were just trying to find our way to the ranch.

Driving in through the gate to the ranch compound, helicopters flew overhead, and I wondered where the heck we had traveled. As always, my next day of horseback riding would shed the greatest light on the area and its history. I knew about the contentious issues involving the U.S.-Mexico border, but after riding at Rancho de la Osa, I had a newfound appreciation for the complexities involved and a greater understanding of the unique history that this area of the country and this 300-year-old ranch hold.

Ron Schaefer, head cowboy at the ranch, is the real deal. He wears a six-shooter and spends his days riding the range, admiring the beauty of the high Sonoran desert, the rolling hills of Mexico and the ever-changing plant life that populates the desert. His favorite stories are about Pancho Villa, a relic from the Mexican Revolution, who reportedly fired upon the ranch. A cannonball still rests in its walls, which are thick and old, keeping in the cool, desert night air to provide a respite from the hot, dry days.

Ron and I saddled up to explore the area surrounding the ranch, starting at an old graveyard enclosed by a cactus fence with white picket posts and populated by simple wooden crosses and gravestones, which were once laid to rest straight and now lie askew. Ron told me that folks from Mexico whose relatives are buried here still come over on the Day of the Dead to lay flowers on their relatives’ gravestones.

Where Rancho de la Osa now stands once stood a mission outpost in the late 1600s, run by Spanish Jesuit priests. One of the original buildings from the mission remains and is used as the cantina. Some say it is the oldest building in Arizona.

In the early 1800s, the King of Spain gave the ranch to Mexico as part of a large land grant. In December 1853, the ranch lands went to the U.S. during the Gadsden Purchase, when the U.S. acquired a large portion of Southern New Mexico and Arizona. Mexican, Indian and American influences can be felt here today.

Sasabe feels like it is between lands. Sparsely populated on the U.S. side (pop.25), much of the area is part of the Buenos Aires National Wildlife Refuge. Sasabe, Mexico, the sister city, is more populated (pop. 4,500) but still small. On the Arizona side, I ate delicious Mexican food at the ranch, rode with Americans and visited the grave sites of Mexican workers, all the while staring at a wall meant to separate the two countries.

Riding on Chewy, Ron’s well-trained, 28-year-old horse who had the mind and body of a 12 year old, I was able to get close to the controversial wall being built to keep Mexicans from illegally crossing.

Bordering on a wildlife refuge and Indian reservation, one would expect the land to be devoid of trash. The opposite is true. Immigrants crossing leave behind water bottles, shredded clothing, pesos, tin cans. The wall itself mars the natural beauty. Some 14 feet high, its dark metal bars are an unmistakable reminder of its purpose. Even though the wall is incomplete (it ends abruptly a few hundred yards from where we rode, at the border of the Indian reservation, and is thus entirely futile), it sticks out among the desert’s tenacious wild flowers, cacti and animals.

As I stared at the cacti and prickly plants populating the desert, I wondered how on earth anyone could cross at night. I was careful enough on Chewy, but those crossing without a light source must get torn to shreds on these plants.

Ron and I ate lunch on a higher outcrop. In the distance, Baboquivari rose into the sky. The Tohono O’odham Indians believed that this mountain was an umbilical cord to heaven and a sacred place. Staring at this, the largest structure in the area, I could see why.

We rode to a still higher point at a nearby ranch. The panoramic view of the rolling hills in Mexico was beautiful, better still on horseback. We were that much higher, staring out toward a land of sandy washes and tall saguaro cacti weathered by the years and keepers of their own stories about Indians, revolutionaries and modern-day travelers who have taken on the desert with all of its challenges and beauties.

Riding at Rancho de la Osa was much more than a riding vacation or even work for me. It was a window into a challenging, modern debate and the strong history that rests on the border of two lands not all that dissimilar.