The Great Race of Mercy 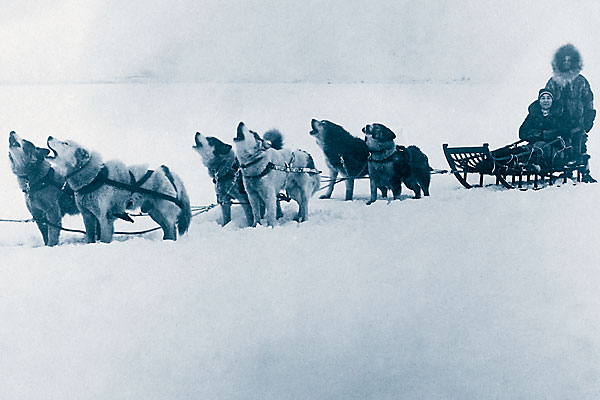 The place was Nome, Alaska. Dr. Curtis Welch waited anxiously for his prayers to be answered in the early morning hours of February 2, 1925.

Outside, it was 35 degrees below zero Fahrenheit. The good doctor was battling an outbreak of the dreaded disease diphtheria and was awaiting the delivery of a fresh supply of diphtheria antitoxin.

In what became known as the “Great Race of Mercy, ”the heroic musher Gunnar Kaasen drove his team of huskies, led by the immortal dog Balto, to answer the doctor’s prayers at 5:30 a.m., after traveling the last leg of the 674-mile trip from Anchorage. Kaasen and his fellow mushers had covered this enormous distance through ice and snow in less than five days. Today, this feat of mercy and grit is celebrated every March by the running of the famous Iditarod sled dog race from Anchorage to Nome.

Dr. Welch had seen this devastating disease choke the airways of his young patients, causing death by asphyxiation. In 1925, Dr. Welch was fortunate to have received the antitoxin that was able to break the epidemic by preventing the spread of the diphtheria infection. Before the 1890s, on the other hand, the treatment options open to the frontier physician had been quite limited.

Diphtheria devastated many families in the Old West, including that of the gunfighter and acquaintance of Wyatt Earp, “Texas Jack” Vermillion, who lost his wife and two children in Missouri circa 1870.

Diphtheria is a disease caused by a toxin-producing bacterium that primarily infects the mucous membranes of the back of the throat (pharynx), the tonsils and the nose. The bacterial toxin causes the formation of an inflammatory grayish white membrane that extends over the soft structures in the throat, causing obstruction of the airway, especially in young children. It is spread from person to person by contact with the respiratory droplets or soiled clothing of an infected individual, or even contaminated raw milk. The shedding of infectious droplets can last from two to four weeks; but the rare chronic carrier of the disease can infect others for six months or more.

When diphtheria struck an old frontier town, 5-10 percent of infected victims perished; but the percentage of fatalities was much higher in young children. Victims usually developed fatigue, high fever and sore throat, with difficulty swallowing. If neck swelling ensued, the prognosis was usually poor. Diphtheria can also cause a secondary infection of the skin at the site of preexisting skin disease. The bacterium even attacks the kidneys, the heart and the nervous system.

The “You Tubed” Treatment

The only effective treatment in the Old West was to quarantine infected victims and to attempt the best possible management of the patient’s airway by keeping it open by any means, including tracheotomy (surgical opening of the windpipe through the front of the neck). Older medical textbooks recommended that the patient have his feet placed in warm water and that he breathe in the warm vapors of water, mixed with vinegar—even bleeding was recommended.

In the 1880s, the U.S. physician Dr. Joseph O’Dwyer developed tubes that could be inserted into the throat of an infected person to maintain the airway until the disease subsided or the membrane was surgically reduced. This latter treatment was controversial, since it could result in uncontrollable bleeding.

As late as 1892, Dr. William Osler recommended the application of various agents directly to the bacterial membrane, including carbolic acid, a 50 percent solution of hydrogen peroxide and lactic acid mixed with limewater and trypsin.

In the 1890s, an animal-based antitoxin was developed by the German physician Emil von Behring, for which he was awarded the first Nobel prize in Medicine in 1901.

Today, we protect children and adults with vaccination, usually administered with protection against tetanus and, sometimes, pertussis (Whooping Cough), in the form of the DTP series of shots. Antibiotics, including penicillin and erythromycin, can also treat diphtheria and can prevent its complications.

Diphtheria is just one of several devastating epidemics that threatened the pioneers of the Old West. I will “treat” you to most of them in subsequent Frontier Doc columns.