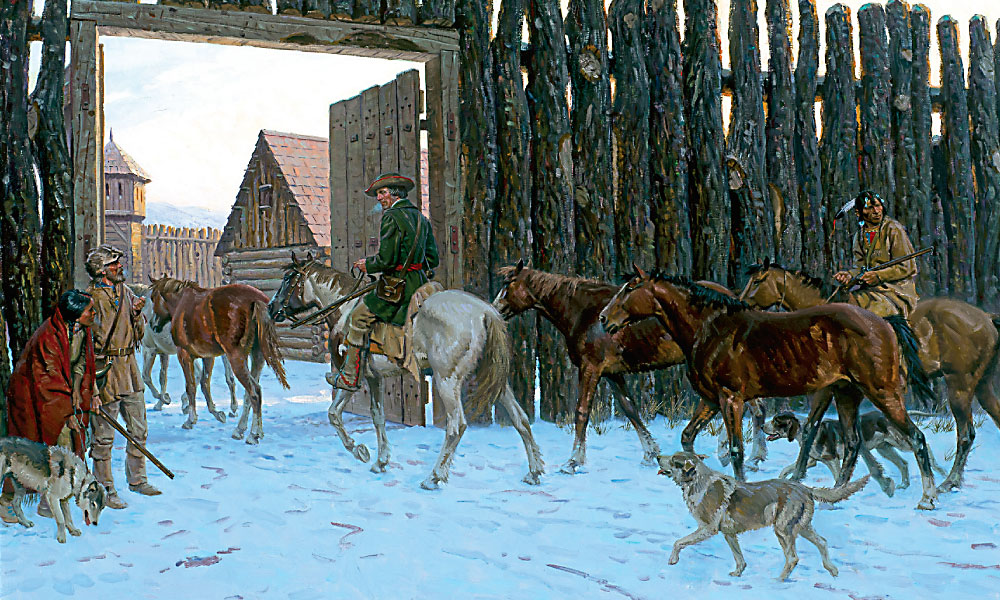 In the winter of 1833, ten years after Hugh Glass was attacked by a grizzly and left for dead, the mountain man took a message to Fort Union with Ed Rose and Menard. As they crossed the frozen Yellowstone River below the fort, Arikara warriors charged down; all three fur trappers were killed.

Their deaths were avenged by John Soy Gardner, who “caught up with a couple of the murderers a few weeks later and burned them to death,” John F.A. Sanford wrote to Superintendent of Indian Affairs William Clark on July 26.

Clark was the same man who had traveled with Meriwether Lewis to this spot near the confluence of the Yellowstone and Missouri Rivers in April 1805; the explorers recommended the area as a prime site to establish a trading empire. John Jacob Astor’s American Fur Company made that dream a reality when his trappers constructed the fort around 1828.

Two years later, on May 19, Glass was recorded in one of the first explicit references to Fort Union, when he arrived at Fort Tecumseh with Francis Viond and nine men. They rounded up 58 horses and mules for Fort Union and headed back to the post on May 23.

The murders of Glass and his trapper companions took place while German Prince Alexander Maximilian was visiting Fort Union with Swiss artist Karl Bodmer, who, along with George Catlin the year before, illustrated the only known portrayals of the original fort. The prince added to his collection the scalp of an Arikara who had slain the mountain men and even Glass’s scalp itself.

But this last remnant of one of the earliest mountain men never made it to Germany; Maximilian’s collection burned in a fire aboard the steamboat Assiniboine.

Bodmer’s July 2, 1833, pencil sketch portrays Fort Union’s wooden gates and towers, which informed Tom Lovell’s Sundown at Fort Union. The oil hammered down for $120,000 at the Jackson Hole Art Auction held on September 18-19, a couple months before the Christmas Day release of the Hugh Glass movie, The Revenant.

Hosted in the Wyoming city that celebrates its pre-1840s fur trappers rendezvous history with an annual summer festival, the auction, which realized nearly $5.6 million in bids, sold numerous mountain man artworks to collectors.