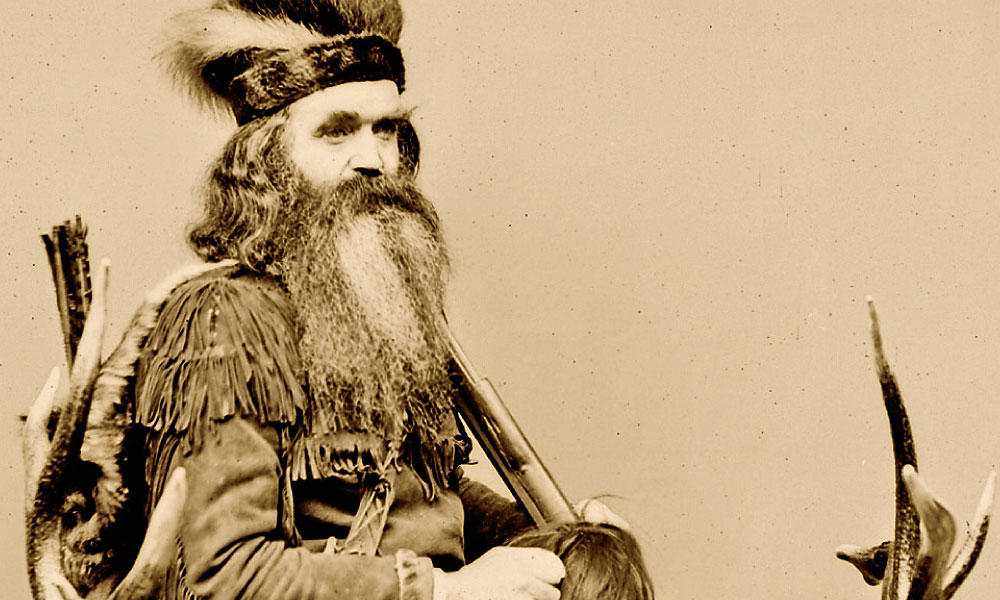 In 1852, flush times abounded at Christmas in Uniontown, located in the Humboldt Bay area of northern California. Argonauts paid Seth Kinman and David Leeper $50 each—$1,580 each in purchasing power today—to preside as the orchestra. “Kinman’s repertoire consisted mainly of an alternation of ‘The Arkansaw Traveler’ and ‘Hell on the Wabash’….” Leeper recalled.

Kinman was already known for his fiddle playing by then, but he would become more famous for trapping elk and grizzly bears as a mountain man…particularly for what he created out of their horns.

Wandering trappers led by William Henry Ashley first reached California about 30 years before Kinman. Yet Charles Howard Shinn, in a November 1891 article for Outing Magazine, held up Kinman as the most “remarkable trapper in the Humboldt region….” He also gave the mountain man credit as the guide who helped George Crook shoot his first bear, in 1853, at Fort Humboldt in Eureka.

Kinman was supplying the fort with elk meat at that time, remembered Mary B. Underwood, who had traveled to the fort with her lieutenant husband, Edward. She made note of the bear hunt as well: “Lieut. Crook, later General George Crook, who was a sub under Lt. Underwood, set a trap and caught a black bear in the woods near where the fort was being built.”

Bears caught in traps were still ferocious and dangerous, as Stephen Powers noted in his 1877 book. After an Indian fetched Kinman for help, the mountain man “…found an enormous grizzly bear snared in the noose, frantic with rage, roaring, lunging about, dragging down the bushes and saplings with the pole, and throwing himself headlong when suddenly brought up by some tree.” Kinman told Powers he waited for the beast to quiet itself a bit, then “sent a bullet singing into his brain. The great brute fell, quivered, then lay quiet.”

Kinman was more than just a hardy frontiersman; he was also a widower and single father of three youngsters when he used his jackknife and elk and grizzly bear parts he had collected over the years to craft his chairs for dignitaries and U.S. presidents. Cholera had taken two of his sons, in early December 1852, before his Christmas concert, and his wife died not long after, in April 1853. The mountain man’s ingenuity may have been borne out of his tragic loss of his loved ones.

Mountain man Seth Kinman presented his first presidential chair to James Buchanan, telling the New York dailies: “Anybody can make a cheer [chair], but I take credit for the design of this. I kill deer and elk meat up in Humboldt County. My range is from Bear Valley into Oregon. This winter I killed considerable meat, so I thought I would take it easy, and set about making this cheer [chair], with the view of sending it on to…Old Buck. After I got it finished, though, the boys up in our parts thought it would do to travel on; so I thought I would try and go on with it to [Washington, D.C.] myself…with nothing but my rifle and powder horn. Nobody has ever yet sat in this cheer [chair], and never shall till after the President.”

He also presented chairs to Abraham Lincoln, Andrew Johnson and Rutherford B. Hayes.

After Lincoln’s assassination on Good Friday, citizens mourned their president’s death by rail, with his casket arriving in various cities for public viewing. On April 26, 1865, The New York Times described Kinman walking in the funeral cortege in New York City: “Much attention was attracted to Mr. Kinman, Californian, who walked in a full hunting suit of buckskin and fur, rifle on shoulder. Mr. Kinman, it will be remembered, presented to Mr. Lincoln some time ago a chair made of California elk-horn, and continuing his acquaintance with him, had, it is said, enjoyed quite a long conversation with him the very day before the murder.”

In 1886, two years before he died, Kinman finished his last presidential chair, an elkhorn chair, for President Grover Cleveland 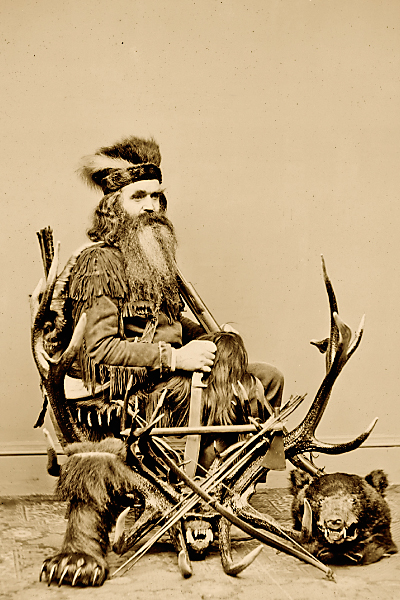