The Nude Duel that Will Not Die 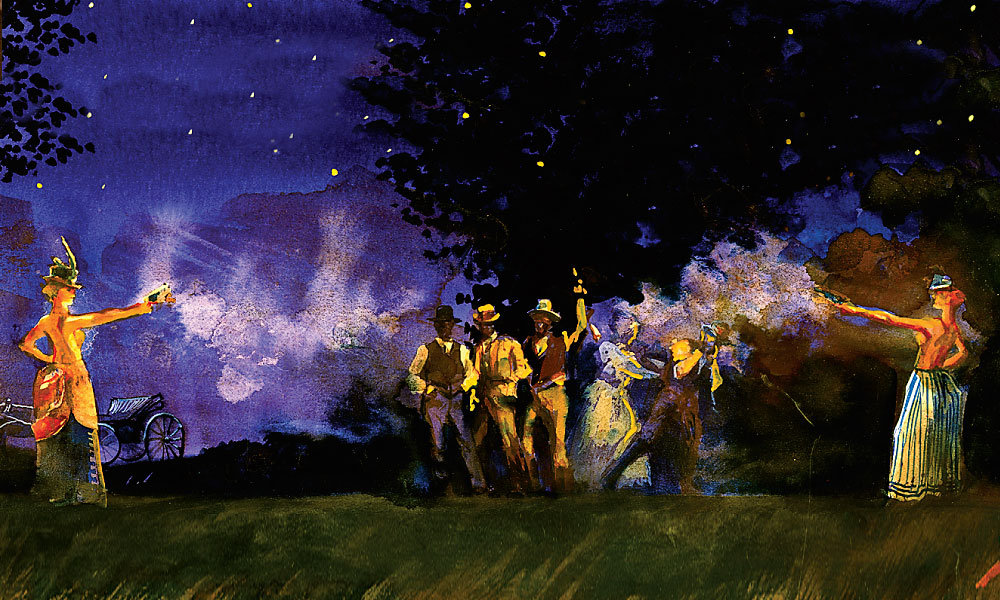 A wild picnic is in progress just outside the city limits of Denver, Colorado. Notorious brothel owner Mattie Silks is among the party crowd. She is with her “kept man,” Corteze Thomson, a handsome, fleet-footed gambler.

After numerous rounds of drinking games and bawdy fun, Silks notices a voluptuous business rival, Katie Fulton, displaying an extreme amount of affection toward her man. Words are exchanged, and threats are made. Neither soiled dove backs down.

A duel is suggested and agreed to, with Thomson acting as Silks’s second and Sam Thatcher as a second for Fulton. Pistols are produced. To facilitate better aim, both women strip to the waist. In classic dueling fashion, the two women step off the required paces, turn and fire.

In the twilight, a cry is heard, and a body falls to the ground. Everyone rushes forward through the billowing gunsmoke to see which queen of the demimonde is still standing. To the crowd’s surprise, both prostitutes are still on their feet. Thomson, however, writhes on the ground with a bullet in his neck.

Great story, except for one problem: It didn’t happen.

Here’s the real story: A half-dozen of the “sporting crowd” are celebrating Thomson’s stunning win against the noted Sam Doherty in a 125-yard foot race. With at least $2,000 in winnings (which Silks had personally bet on Thomson), the revelry begins in earnest.

By evening, Thomson, Silks, Fulton, her “friend” Thatcher and possibly two others have ended up on the banks of the South Platte River, drinking at the spot that The Rocky Mountain News bemoans is a “resort for fast men and for fast women.”

Although the cause is unknown, an argument ensues between Silks and Fulton. Thomson steps between the two and punches Fulton in the face, knocking her down. Thatcher tries to protect Fulton from further attack, but he is decked. As Fulton tries to fight her assailant, she is knocked down a second time. A kick in the face breaks her nose. In the melee, Thomson pulls a pistol, which someone jostles loose from his grip, and it falls in the grass.

The fight breaks up, and the bleeding, disheveled combatants stagger to their respective carriages and head toward town. Beyond Olympic Park, a carriage draws up beside Thomson’s carriage. A shot is fired, and Silks’s man is grazed in the neck. Thomson survives—end of story.

The assailant’s carriage contains Fulton and Thatcher, firing from the pistol that Cort dropped in the grass.

So what is the source of the duel story?

Two newspapers report the park altercation: The Denver Times and The Rocky Mountain News. Both newspapers agree the altercation was not a duel, but one paper refers to the periphery partisans as “seconds.”

Fast forward to 1939, when Forbes Parkhill writes a book, The Wildest of the West. He pounces on the word “seconds,” which is often applied to persons who assist or support another in a duel. The legend of the duel is spawned from Parkhill’s book.

Numerous writers have kept the saga alive ever since. Clark Secrest, the former editor of Colorado Heritage, says, “Every year The Rocky Mountain News publishes the Mattie Silks duel story, and every year we write to them that it never happened, and every year they run a retraction. The story will probably never die.”

Katie Fulton left Denver, Colorado, on the next train bound for Kansas City, Missouri, but she soon returned. On September 3, 1877, she had another confrontation with Mattie Silks, who decked Fulton once again, reinjuring her nose. After the fight, Madam Fulton left for good.

The altercation took place at Olympic Park, which is today called Confluence Park. The park now has extensive bike paths and picnic areas.

Silks and Corteze Thomson (various writers misspell his surname as “Thompson”) had a stormy union, but she stuck with him for 30 years. By all accounts, he was a no-good drunk.

Thomson continued to race, although he was arrested for throwing a foot race in August 1880. (Perhaps his legs were beginning to deteriorate.) Silks supported him through several of her fortunes and periodically sent him to dry out at a cattle ranch she owned near Wray, Colorado. He died in a Wray hotel on April 10, 1900.

Recommended: Hell’s Belles: Prostitution, Vice and Crime in Early Denver by Clark Secrest, published by the University Press of Colorado