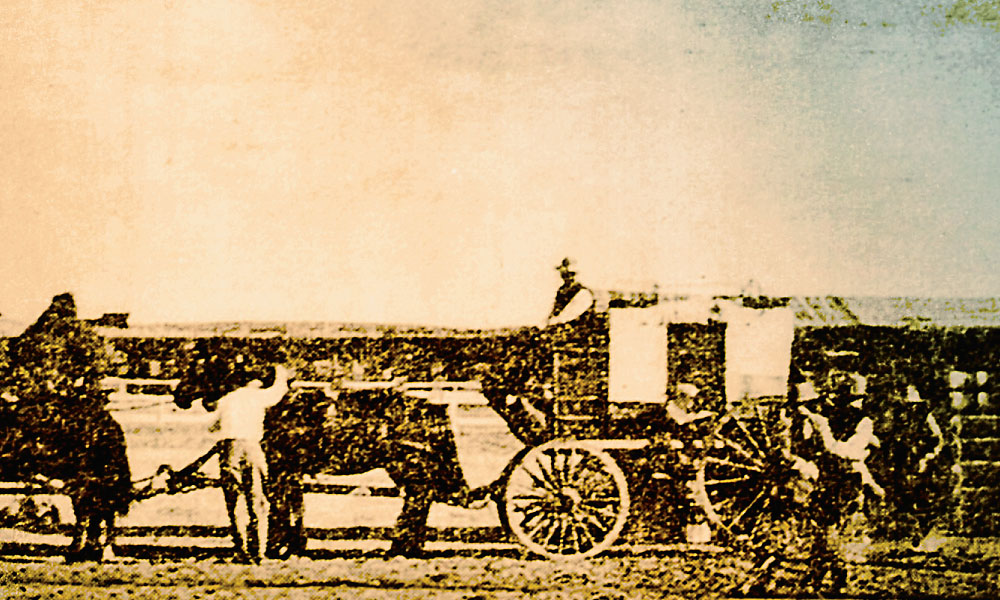 After Johnny Slaughter, murdered on March 25, 1877, became the first stage driver killed along the Deadwood to Cheyenne Trail, the Cheyenne and Black Hills Stage Company built two steel-plated treasure coaches. The company named one after Slaughter and the other after the Civil War ironclad USS Monitor.

Both stagecoaches were lined with steel plates 5/16th inches thick. Each door had a porthole for guards to shoot out. The strongbox, with walls three inches thick, was bolted to the floor. The manufacturer guaranteed the strongbox could withstand assaults upon it for 24 hours.

Yet bandits were not dissuaded. At Canyon Springs Station, on September 26, 1878, Charles Carey’s robber gang waited for the Monitor, which had left Deadwood, Dakota Territory, hauling gold and valuables totaling $27,000.

A gun battle ensued, resulting in the passenger dying and men wounded on both sides. The robbers overwhelmed the coach defenders—the driver and three shotgun messengers—broke into the strongbox and took off with the loot.

The Monitor’s robbery unleashed a manhunt expanding from Dakota Territory into Wyoming, Nebraska and Iowa. The Deadwood, Dakota Territory, posse detained road agent John Brown at the scene of the crime. After lawmen threatened to apply the “Montana Argument”—hang the outlaw—Brown broke down and revealed he was not party to this crime, but he did know the robbers were heading south. Based on Brown’s information, lawmen apprehended one of the robbers, Charles Borris, who confessed.

Informants told the posse that Carey, a wounded Frank McBride and an unidentified wounded man were traveling in a wagon east from Rapid City. The pursuers then learned both wounded men had died. They found the wagon and one gold bar, but not Carey.

The posse then caught Andy Gouch; because he showed them where some gold was buried, he was not prosecuted. After Archie McLaughlin and Billy Mansfield were captured and confessed, vigilantes “hoisted [them] between heaven and earth,” remembered Jesse Brown, who, with Jim May, had been guarding the prisoners on a northbound stage to Deadwood.

Thomas Jefferson “Duck” Goodale returned to Iowa, displaying a gold bar and telling family and friends he had struck it rich. Yet lawmen arrested Goodale, too, and recovered his stolen bar. On his way to Cheyenne, Wyoming, by train to stand trial, Goodale, wearing leg shackles, asked his guard permission to use the water closet. When Goodale did not come out, guards broke down the door and discovered he had escaped out the window…and disappeared for good.

The last bandit arrested was Albert Spears, in Nebraska, where he was trying to fence the stolen jewelry.

Carey vanished and with him, presumably, went the more than $10,000 of the Monitor’s treasure that the lawmen never recovered. He, at least, had beaten the original war wagon and successfully ran off with a treasure of riches.

Bill Markley has written his first published novel, Deadwood Dead Men, and is the author of nonfiction books that include Up the Missouri River with Lewis and Clark. He works for the South Dakota Department of Environment and Natural Resources, and lives in Pierre with wife Liz.