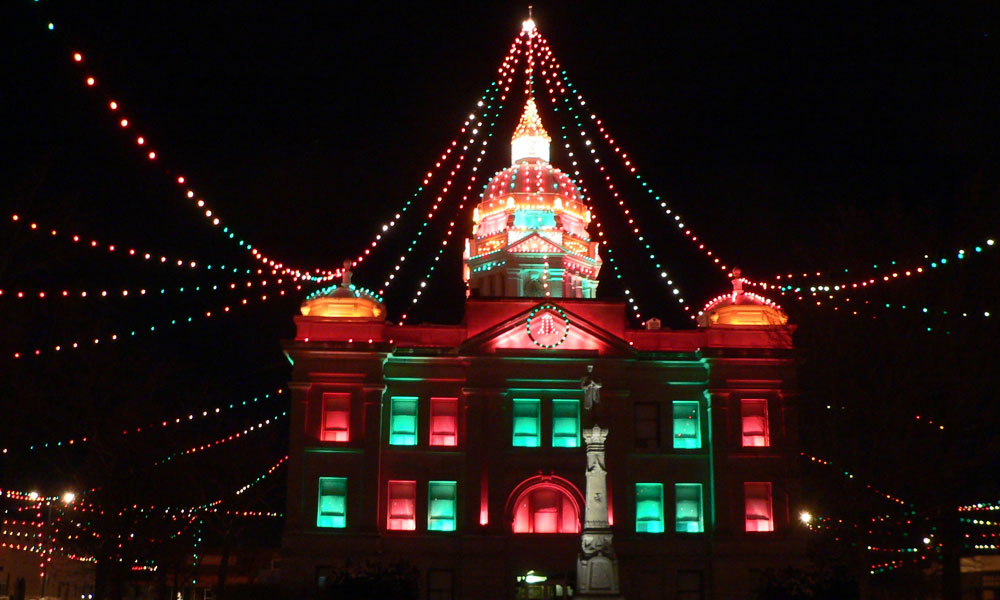 Minden bills itself as “Nebraska’s Christmas City,” stringing 15,000 lights throughout its town square to seal the deal.

But to know why this town of just 3,000 deserves to wear the heart and spirit of Christmas, then the story of a giving and generous community rallying around the Minden Opera House must be told.

In 1997, Nebraska’s retired director of the Department of Agriculture, Rob Raun, looked around his hometown and realized the opera house where he had danced as a boy was in such bad shape, “we were gonna lose it.”

The lifelong farmer had watched the building deteriorate over the years—antique shops occupied the lower floor, while the second-floor ballroom was boarded up or used for storage. He couldn’t imagine his town without the majestic building built by Civil War veteran Wray Thorn in 1891—just 15 years after German, Swedish and Danish farmers founded the town.

Fortunately, a new community foundation was looking for a landmark project. Putting the two together resulted in the best Christmas present the town could ever want.

Not a cent of tax money went into the $2.8 million that renovated the opera house, which reopened in 2000. The project was paid for by individual contributions and grant money from generous corporations that included the Peter Kiewit Foundation, the Kellogg Foundation, Walmart and the Burlington Northern Santa Fe Railway.

Marcy Brandt, the director of operations, says a donor wall honors those who gave $1,000 or more. “There’s 100 to 150 names on that wall, and I know about 80 percent of them—that family lives over there; I know that family. The people of Minden really stepped up,” she says.

Born and reared in Minden, Brandt recalls the “old days” when the opera house presented yearly plays of the volunteer Community Players. “I played piano in Paint Your Wagon when I was in high school,” the mother of three proudly says.

The Community Players are back in the renovated building, entertaining with at least two plays a year. Other performances include musical concerts, comedy acts and a Classic Monster Movie Marathon. The opera house has also become a favorite wedding and prom venue.

“We’re super proud,” Brandt says—both of the opera house and the community efforts to save it.

Raun agrees, and he also offers advice for another town that faces the loss of a local treasure: “Don’t give up. If you’ve got somebody who’s really sold and can carry the ball, it will make all the difference.”

The Minden Opera House will be in its full glory this Christmas, when the town celebrates “100 years of lights.” It will host a community choir concert and a Miss Christmas City pageant, and will oversee the town square’s Light Parade.

But Christmas won’t shine just on the outside of this lovely Midwestern town; it will also be Christmas in everyone’s hearts.