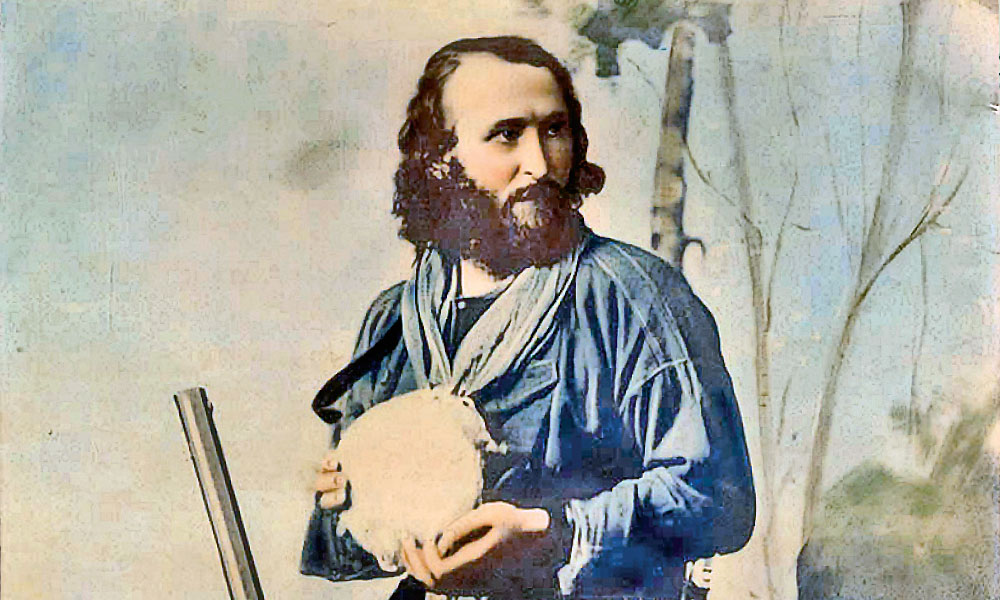 Contention City played a major role in the growth of southern Arizona at a time when the territory needed it most. An accidental stumble started it all.

In 1879, prospectors Ed Williams and Jack Friday were searching for their missing mules. The chains their mules had dragged behind them scraped away the dirt and unearthed streaks of silver, gleaming in the morning sunlight.  But, unbeknownst to them, Ed Schieffelin was camped out a short distance away.

Schieffelin, who was prospecting the unsettled hills of “Goose Flats,” had already uncovered the lure that would draw thousands to this place only previously known to the Chiricahua Apaches and a few soldiers at Camp Huachuca. Camped out in the same area as Williams and Friday, with previously staked claims to several other nearby mines, Schieffelin disputed the ownership to the newfound silver lode. One can only assume these prospectors exchanged an abundance of ill-tempered words over the find. So much that Schieffelin, after the claim was split, called his mine the “Contention,” a tribute to the dispute of the claim.

The river gave Contention City its location. Ten miles from the Tombstone Mining District, the San Pedro was the closest source of water for supporting the stamping mills, which separated the silver from the ore. With the construction of the Contention Mill, the city grew into a mining camp along the eastern bank, bringing with it fortune hunters, gamblers, whiskey peddlers and other colorful characters of the day. Supporting the vision of enterprising entrepreneurs, including D.T. Smith and John McDermott, Contention City was destined for greatness. In September 1879, Smith and McDermott mapped out the town and sold the lots within a week. By early 1880, Contention City had a post office, a hotel-restaurant, a Chinese laundry, one saloon, a meat market, a dry goods store and its first school. Soon, three large stamp mills served the Tombstone mines, together employing almost 100 men.

By 1881, Contention City was in full swing. Despite Tombstone’s own early rapid growth, the railroad was built in Contention City instead of Tombstone. A two-story train depot was built a little farther up the San Pedro River, where the residents relocated the city, packing up and taking the buildings with them. The first trains arrived in January 1882, bringing oyster shipments, mainstream Paris fashions for the ladies and other luxury items from afar. More than 20 years passed before the railroad reached its sister city of Tombstone in 1903.

Contention City wasn’t immune from the lawlessness of the “cowboy” faction of southern Arizona. Although their exploits gained little notoriety in this new town, some incidents were as colorful as classic Western movie shoot-outs. These included the pursuit of the robbing and murderous Jack Taylor Gang by both the Mexican Rurales and Arizona law enforcement, particularly Sheriff John Slaughter. Slaughter’s posse tracked the outlaws to gang member Manuel Robles’s brother’s home in Contention City. They waited to raid the house until the residents were asleep. Thinking this would be an easy capture, the lawman was surprised by the hail of gunfire from inside the house!

Perhaps the best-known Contention City tale is the Benson stagecoach robbery that took place just outside of town on March 15, 1881. Through a coerced confession by a drunken “Big Nose” Kate Elder, Sheriff John Behan used the opportunity to arrest John Henry “Doc” Holliday and charge him with the murder of stage driver Eli “Bud” Philpot. Holliday was soon cleared of all charges when Elder sobered up.

John Clum found solace at the town’s Grand Central Mill on the night of December 14, 1881, when he dodged a near-assassination attempt. After an ambush on his stagecoach, he set out on foot through the darkness until he reached the mill.  From there, he made a phone call back to Tombstone around 1:00 am. Yes, Arizona had telephones between the mills in Contention City to the Gird Block in Tombstone as early as 1881.

In March 1882, George Hand stepped off the train at the Contention City depot. He had traveled from Tucson with a diary tucked inside his coat pocket. Hand was in Contention City to help out a U.S. Army buddy, Billy Bradley, with his new venture in the saloon business. Somewhat to Contention City what George Parsons was for Tombstone, Hand recorded in his diary the people and events of the town.

The day after Hand’s arrival, he wrote of the cowboys riding in on Friday, March 24, fully armed and prowling through town. The cowboys he saw, if they were indeed part of Sheriff Behan’s posse, were tracking down famous Tombstone lawman Wyatt Earp and his crew. Hand, who was in Tucson just days earlier, witnessed the body of Frank Stilwell—who Earp was suspected of killing to avenge brother Morgan’s murder—as he lay dead on the train tracks. “He was the most shot up man I ever saw,” Hand reported.

On April 10, 1882, Hand was present when Gen. William Tecumseh Sherman arrived by train. On his way to Tombstone, Sherman was on an inspection tour to address concerns surrounding renegades from the San Carlos Apache Reservation. On May 30, Hand reported that he accompanied Judge A.O. Wallace and Bill Bradley (along with Hand’s favorite dog, Rip) on a visit to the graves of the late Co. E.A. Rigg and William Petty.  He carried a big basket of flowers to decorate their graves.  If not for the writings of those like Hand, no records of the people of Contention City or their time there would have survived.

Unfortunately, Contention City had but one source of revenue. When that ended, so did the town, much like flowers in the spring sprang up with the promise of tomorrow, but wilted with the first frost of fall. Flooding in the Tombstone mines brought an early demise to Contention City. When the mines were forced to close down, the town’s stamp mills went silent. Workers and residents packed up and left, forcing the post office to close its doors on November 26, 1888.  Two years later, the productive and booming city had turned into a mere ghost town. Its time spanned only a decade. Tombstone managed to survive because it was the Cochise County seat, and it remained so until 1929.

No landmarks remain in Contention City today, save the foundations of the mills, a few overturned headstones of a small cemetery and a pile of rocks perched near an old adobe wall.

Hollywood deserves credit for keeping Contention City alive. The movie 3:10 to Yuma with Glenn Ford, and later Russell Crowe, portrayed a small-time rancher escorting an outlaw to the Contention City depot for the train to Yuma Territorial Prison. Real-life events inspired the movies too. Ike Clanton, still seeking revenge on Earp and Holliday for Tombstone’s infamous 1881 O.K. Corral gunfight, petitioned for a trial in Contention City, after Earp and Holliday were found not guilty in Tombstone. Of course, no trial transpired, but that didn’t stop the 1993 blockbuster movie Tombstone from again exposing Contention City to the world.

The mining ghost town may be just another lost town of Arizona, but in the heart of every Old West historian, Contention City will live forever.

Kevin Hogge is the author of Jackson’s Revenge and Tale of a Gunfighter. Cindy Smith is the coauthor of Time in Contention, author of the “Cowboy World” children’s book series and a Western Music Association singer- songwriter.