What History Has Taught Me: Myron R. Deibel 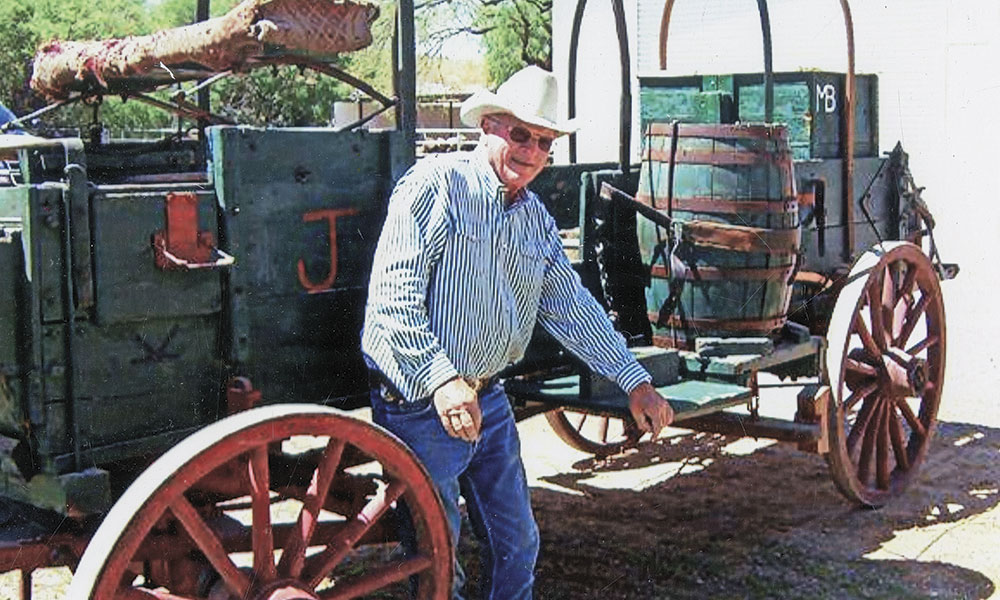 After earning a masters in business administration, Myron R. Deibel began his banking career in 1961 at Southern Arizona Bank in Tucson, Arizona. He transferred to the Phoenix Valley in 1968, working at Arizona Bank and United Bank, and serving as president of the Bank of Scottsdale before retiring in 1992. He also served on the Scottsdale City Council from 1986-1991 and was active in the Scottsdale Charros. Having sold the Super 8 Motel, Myron and his wife, Betsy, are enjoying their retirement in Wickenburg.

My most expensive wagon is a Wells Fargo stagecoach for which I paid $45,000. Crowds at parades love it. Usually the mayor or grand marshal rides in it.

I own a dozen wagons, including an 1840 Conestoga wagon and two wagons I inherited from my father, who lives 80 miles north of Miles City, Montana. He wanted to donate them to a museum, but I talked him into letting me have them.

I usually bring my trail wagon, chuckwagon and sometimes a stove cart to Arizona events, including Prescott’s cowboy poetry gathering as well as Wickenburg’s gold rush parade, where True West crew joins me in my wagons.

In a parade, people love to see the stagecoach. But if it’s a ranch event, like a horse sale, we bring chuckwagons and serve drinks off the chuckbox.

It’s a bear loading the wagons with a winch. My wife, Betsy, helps me drive them to events. I have a 30-foot trailer, a Freightliner with a sports chassis, and then I have a 16-foot trailer, which we pull with my GMC extended cab pickup. It’s a long haul, but I love it.

I love the cowboys and the trail drives. Betsy and I help preserve Western heritage by supporting local museums: The Phoenix Art Museum (50-year member), Desert Caballeros Museum (15-year member), Phippen Museum (on the board) and Scottsdale’s Museum of the West (I’m one of the founders).

I attended the first Cowboy Artists of America show, and I’d like to get the art show back to Arizona before I die.

My favorite John Wayne Western is 1967’s El Dorado. I like all the John Wayne movies, but Olag Wieghorst’s art was in El Dorado, and the artist was a friend of mine.

The best town in Arizona is Wickenburg. Betsy and I started visiting in 1961 and bought land in 1979. We moved there in 1996 and built the Super 8 Motel.

Owning a motel has taught me about dealing with the public. I financed a couple people in the motel business during my banking experience, so I knew the ropes pretty well.

The one thing I have never forgotten is to never jump off your horse in a bad spot.

My favorite Western artist is Charlie Russell, and I own a couple small sculptures by him.

I wish people would understand that they can’t spend more than they take in.

My favorite place in all the world is Prince of Wales Hotel in Waterton Park, Alberta, on the Canadian side of Glacier National Park. The hotel is the only one of Canada’s grand railway hotels built by a U.S. railroad—Great Northern Railway.

The American West is great because it has a diverse environment and lesser population.

History has taught me to follow upon the positive and don’t repeat the bad.