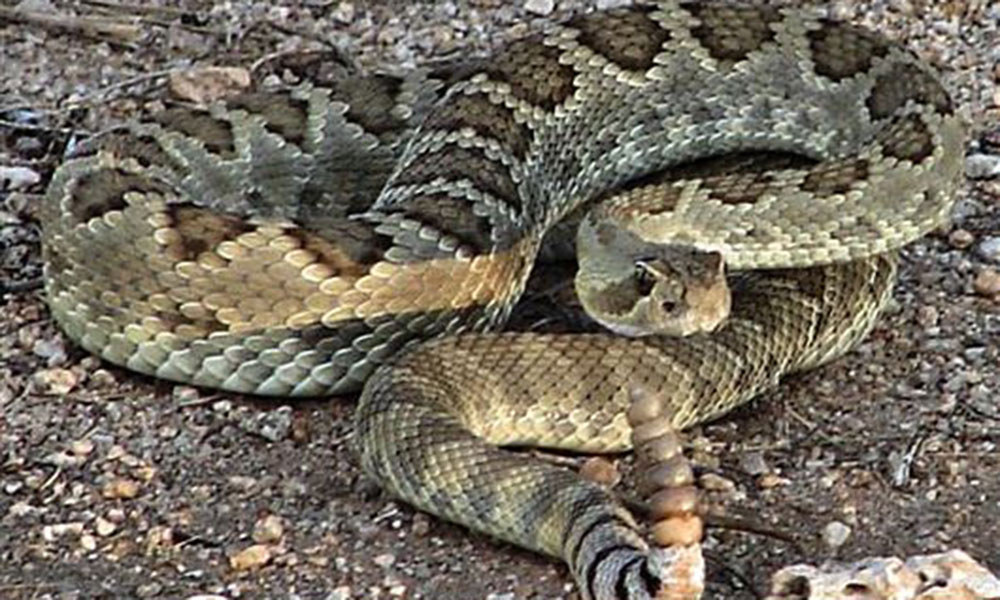 It’s the time of year when rattlesnakes are coming out of their dens after a long winter siesta. This time of the year they’re more likely to be out during the day. As the weather heats up they be more likely to hole up under the rocks and do their prowling at night.

I used to spend a lot of time in the rough country observing rattlers. They are fascinating critters and play an important role in the ecology of the Southwest deserts. I try to stay out of their way and watch em’ do their thing.

I thought it best to share what to do and what not to do in case of an encounter. Don’t go walking in the desert at night without a flashlight and a walking stick. When you come across one in the dark it’s easier to get one out of the way with a stick than a firearm.

I’ve had quite a few chance encounters with rattlers including a face to face meeting north of Cave Creek a few years ago. Lucky for me it was a cold October morning. To get off the cold ground, the snake had crawled up into the crock of some limbs on a large plant and I bent down to pick up something I had dropped. I’ll never forget that rattler
and me eyeball to eyeball. With me being a warm-blooded species and he being a cold, I was able to duck faster than he was able to strike.

A rattlesnake bite can cause severe pain, swelling and bleeding abnormalities. It can also cause tissue loss, systemic toxicity where blood pressure drops and the patient becomes unconscious. It can even bring about amputation.

Recently I received a letter from a True West reader asking about a western movie where they poured gunpowder on a snakebite to cauterize the wound. There are almost as many old wives tales as there are old wives.

I’ve heard dozens of odd treatments for snakebites and most did more damage than good. Snakebites usually occurred on an extremity and folk treatment was to put a tourniquet above the bite then cut an X over the wound and attempt to suck the out poison. Another was to cauterize it with either a hot iron or pour gunpowder on the bite and light it. Another folk remedy was to put cow manure on the bite. One of the strangest folk remedies suggested killing the snake and cut off the fleshy part of body and place against the wound. It was believed the venom had more affinity for the snake than the human and would return to the snake.

When climbing in the rocks don’t stick your hand someplace where you can’t see. Also when climbing don’t blindly place your head on top of a ledge and don’t raise your head over a ledge without first making sure a rattler isn’t up there sunning itself. When walking in a wooded area don’t step across a log but step on top of the log and check the other side.

Stay on the trail and avoid walking through a bushy area. When I was hosting the “Arizona Backroads” television show a few years ago I asked a herpetologist to let one loose so my photographer could film it.

That rattler slowly crawled into some bush and in seconds it was completely invisible. Someone could easily step on that bush and get bitten without ever seeing the snake.

Pets can be trained to avoid rattlers so if you enjoy taking your dog on these ventures it would be a wise thing to do.

Usually, a rattler will only strike when surprised or threatened so if you are bitten the best advice I can offer for dealing with it is don’t panic, stay calm and get medical help immediately. While waiting for help lie as still as possible to lower your heart rate. The Red Cross advises victims to wash the wound if possible and apply a snug but not tight bandage to slow the flow of venom. Try to keep the wound lower than your heart. Don’t walk if possible. Have someone carry you to a vehicle. Bottom line: stay calm.

Important things to avoid include: Applying a tourniquet or ice. Don’t “cut and suck” eat or take stimulants.

If the snake is dead take the body with you to the hospital so the species can be identified. Watch out for the head. A rattler can still bite from reflex action several hours after death.

In Arizona for example there are more than a dozen different species. Let’s hope it isn’t a Mohave that nails you.  It is perhaps best known for its potent neurotoxic-hemotoxic venom, which is considered the world’s most potent rattlesnake venom. In plain talk, the venom from a Mohave is not only tissue destroying but also affects the nervous system.

They look quite a bit like the Western Diamondback. Best way to tell the difference if you don’t want to chance taking a close look at the scales above his eyes is the black rings just above the rattles are narrower than the white whereas with the diamondback the black and white rings are similar in size. The Mohave also have a greenish hue and their diamonds fade on the end closest to the rattles. And, they are more aggressive than the Western Diamondback.

It’s said that some 7,000 people in the U.S. are bitten annually but only about five are fatal. Most of these deaths occur because the person has an allergic reaction; is in poor health; or is unable to get medical attention in time.

Presently there are two FDA-approved anti-venoms, CroFab and Anavip. Anavip was just approved in 2019 and has a longer “half-life” than CroFab meaning it stays in the body longer and reduces the chances of late bleeding complications. Of the two, the newest, Anavip is the better choice. One vial of CroFab is about $3,000 while Anavip is $1,200. Treatment takes about a dozen vials. That doesn’t include the cost of hospitalization and other care.

Oftentimes it’s a dry bite but you’ll still probably need a tetanus shot. The snake doesn’t plan on eating you and doesn’t want to waste its venom. The young ones are the most dangerous since they haven’t learned to measure their venom release. Rattlers are born alive and venomous.

I’ve had quite a few encounters with rattlers and they don’t all react to humans the same way. Some are aggressive but most I’ve met were content to get out of your way and be left alone and I’m happy to oblige them.

Go out and enjoy our great outdoors and wilderness areas. It’s possible you’ll never see one but you can bet they’ll see you. Chances are you or your pet will never have an encounter with a rattlesnake but it’s always good to be prepared for any emergency.