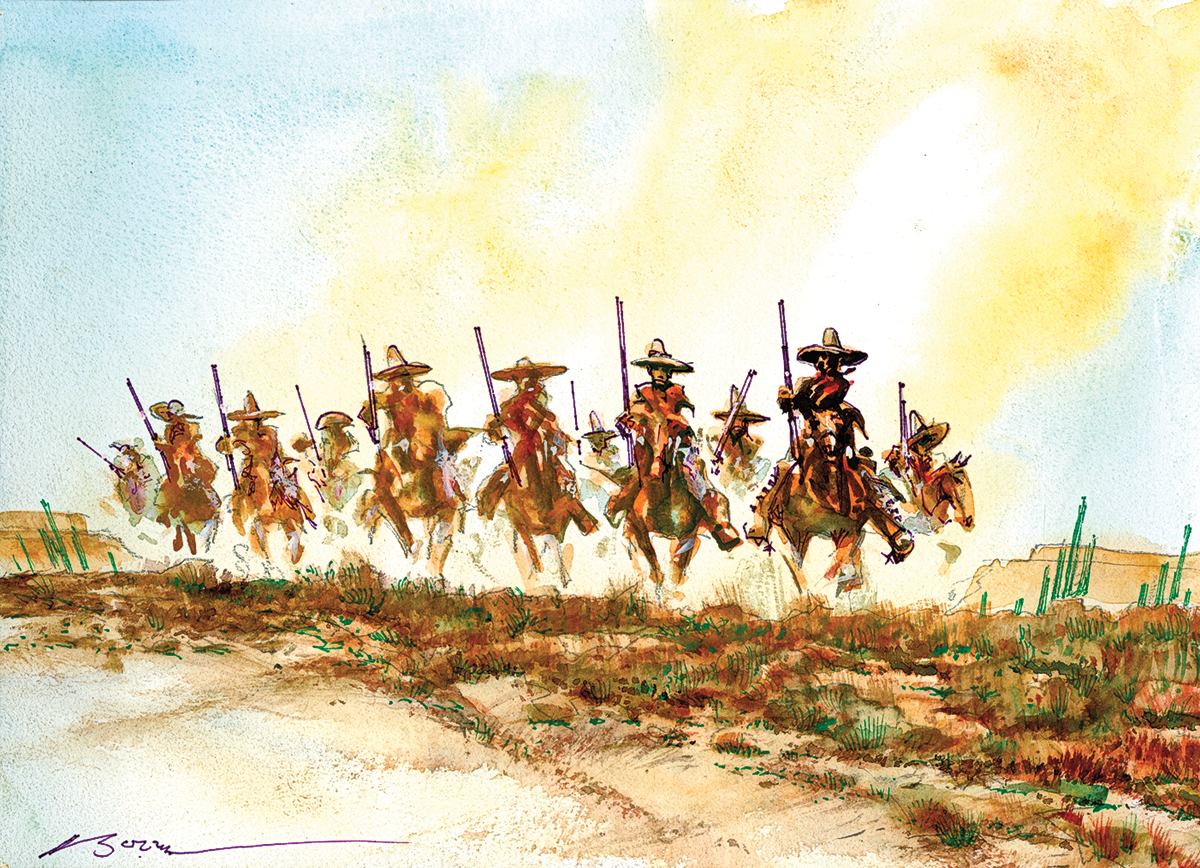 Patricio Valenzuela, the hacendado (ranch owner) of the Agua Fria hacienda, eight miles east of Cucurpe in Sonora, Mexico, is alerted by his vaqueros of raiding Apaches who have butchered one of his cows and an ox at Tapacadepe. Valenzuela hits the trail with 30 fighting men, along with a pack mule carrying extra cartridges.

Riding north, the armada reaches Cerro el Gusano and stops to water their horses. Fresh from the repast, the posse soon catches up to the Apaches who are resting on a ridge.

Geronimo (born Goyathlay) sees them first and gives the order for Apaches to abandon their supplies and flee. The Apache leader mounts a horse and takes with him a hostage he captured in April, a 12-year-old girl, Trinidad Verdin.

Valenzuela’s brave vaqueros charge the temporary camp and pursue the fleeing Apaches up a box canyon. In the confusion, Geronimo’s horse loses his footing on a loose boulder and stumbles, spilling both riders. As he heads deeper into the canyon, Geronimo calls out for Trini to follow him, but she sees her chance to escape and runs toward the Mexicans who, thankfully, don’t shoot her as a hostile.

Valenzuela commands the only exit to the box canyon. He deploys his men to split up, rake the canyon and flush out their prey. Moving out on foot, the two groups stealthily scour the canyon’s length to the end, where a cave shelters Geronimo. He is trapped, and he knows it.

Outnumbered 31 to one, Geronimo hunkers down with his 1873, single-shot Springfield rifle and gets ready for the assault he expects at any minute. He no doubt vows to take as many Mexicans with him as he can.

One of the vaqueros gets careless: Francisco Valenzuela y Munguia pokes his head up to see if he can spot the elusive Apache, and a single shot from the cave hits him between the eyes. As the other attackers scramble to get an angle on the desperate Apache, two more shots ring out, then a fourth.

At dusk, Valenzuela calls his men back. Four of his men have been hit, three of them killed, with bullet holes in their heads. Disheartened, Valenzuela withdraws.

Geronimo escapes in the darkness. He has three more months to run. 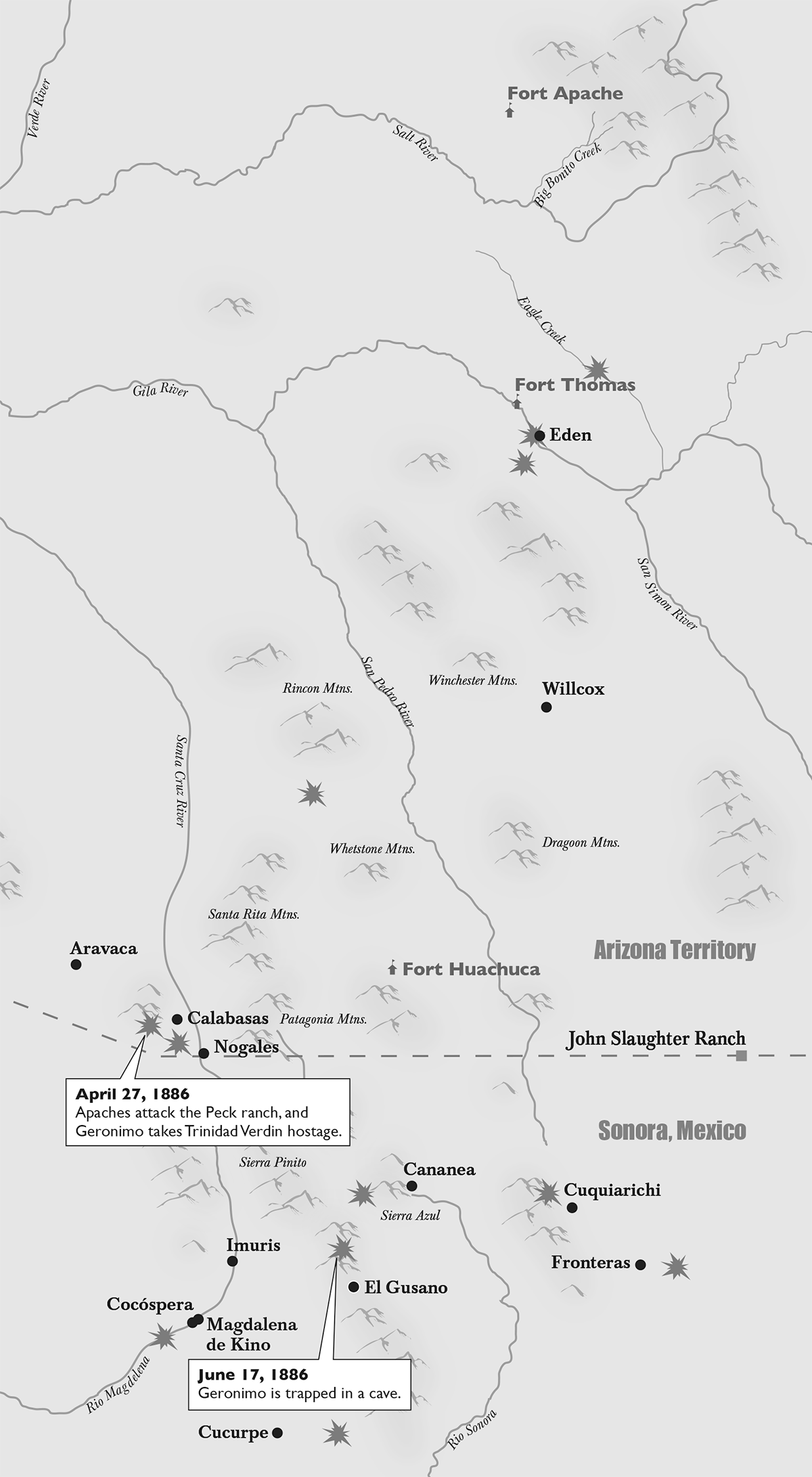 After his escape from the cave fight north of Cucurpe in Sonora, Mexico, Geronimo joined other Apache stragglers as they tried to reconnect with Naiche’s band. All of them, evidently a party of five, headed south, where they hooked up with the main group near Tepache.

Hot on Geronimo’s trail were several squads of soldiers, including Capt. Henry Lawton and his crew. On July 12, Lawton’s scouts found a small trail from the south merged with a larger one from the north. The next day, they located the hostile camp, on a low saddle between two buttes overlooking the Yaqui River. A two-pronged, flanking attack failed as the wary Apaches fled once again in different directions. However, they left all their equipment, provisions and mounts, which numbered 19.

On July 13, Gen. Nelson Miles took the train to Albuquerque to meet with Lt. Charles B. Gatewood, then stationed in New Mexico Territory. The general offered Gatewood the job of going into Mexico to get Geronimo. Gatewood said he thought the “mission sounded like a fool’s errand,” but took the job. After more than a month of trailing dead ends in Mexico, Gatewood, along with two scouts, Kayitah and Martine, met with renegade Apaches and talked them into meeting General Miles. 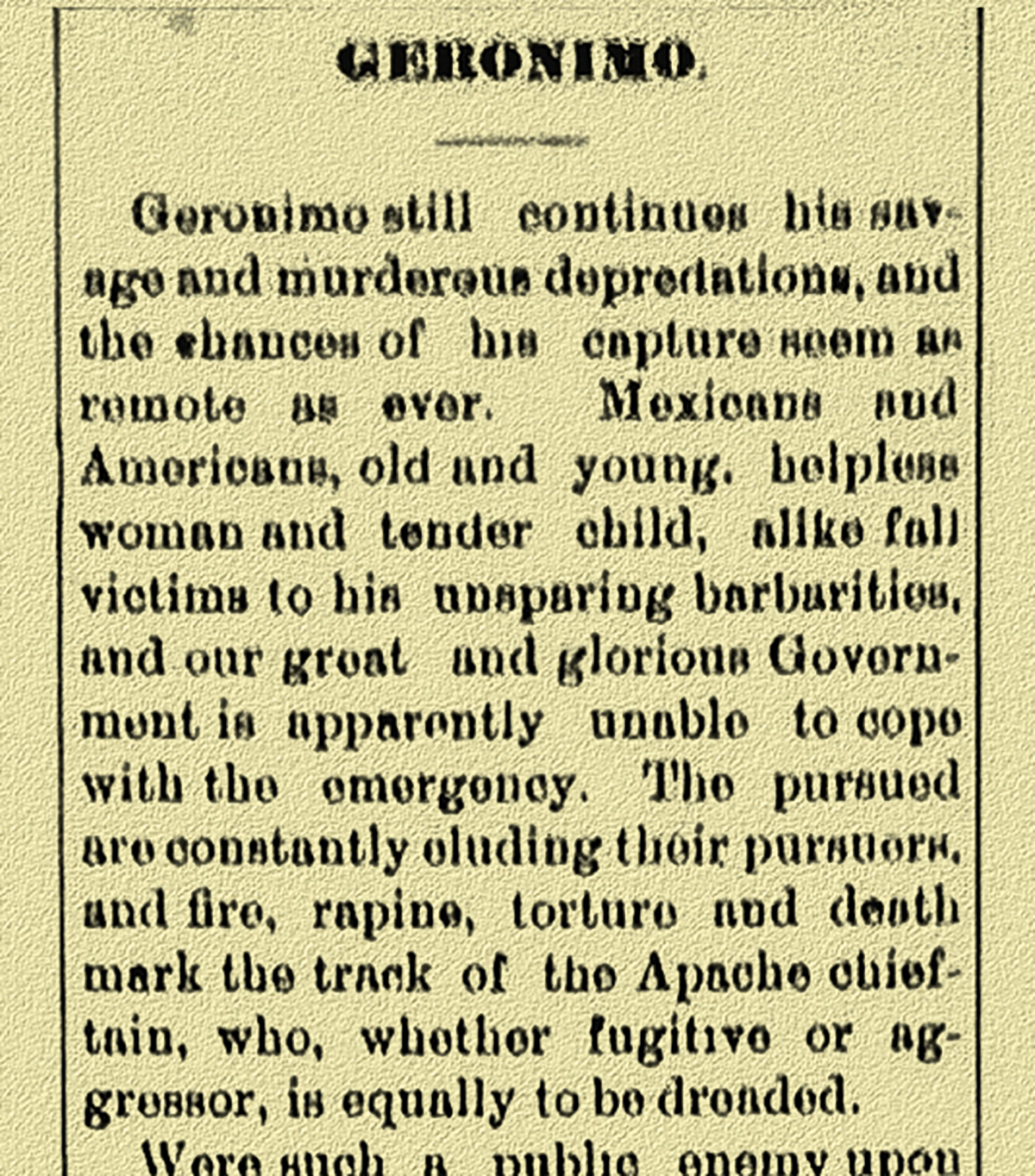 Six months and dozens of deaths after Geronimo and Naiche fled from the Embudos negotiations, the Apache Wars were finally over.

Recommended: From The Illustrated Life and Times of Geronimo by Bob Boze Bell published by Two Roads West, and The Apache Wars by Paul Andrew Hutton, published by Crown Books.