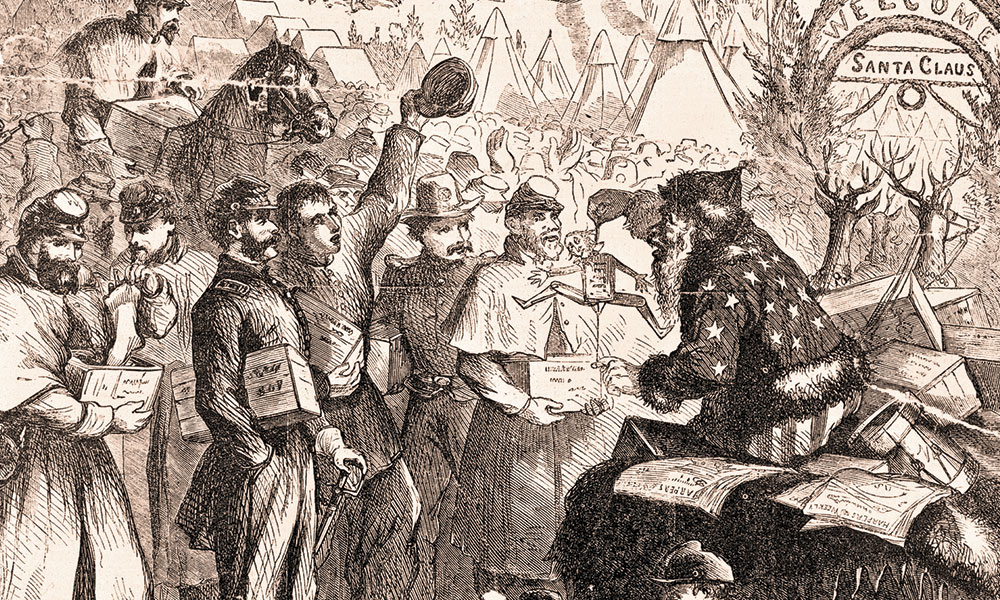 On Christmas Day in 1867, three years after the founding of this fair Montana Territory city, Bozeman was elected by citizens as the county seat. This was a joyous occasion for a town that had experienced a tumultuous year.

The frontiersman who helped blaze the Bozeman Trail through Wyoming Territory into the gold fields of Montana Territory, where he founded this town named after him, had been killed on April 20. His murder remains a mystery to this day. Thomas Cover, who was traveling with Bozeman to negotiate flour contracts with U.S. Army posts, claimed Blackfeet had attacked and killed the frontiersman, but historians have speculated that Bozeman was killed by Cover or by Bozeman’s richest man, cattle rancher Nelson Story. On that Christmas Day, nobody knew if Bozeman’s murderer was standing among them.

To protect settlers living in Bozeman and the Gallatin Valley, the War Department established Fort Ellis on August 27. That Christmas, soldiers patrolled the fort surrounded by a wood stockade that within a year would be removed. The War Department decided wood stockades gave a bad impression that U.S. soldiers were cowards who hid from their enemies.

Soldiers and settlers were already clashing by Christmas. The fort’s first commander, Robert S. LaMotte, had declared war on saloonkeepers. On December 11, soldiers tore down a log cabin near Bozeman where troops had purchased liquor. Three days later, they were sent into town to destroy liquor at two businesses. Bozeman was flush with booze in 1867, having just gotten its first brewery, established by German immigrants Jacob Spieth and Charles Krug.

Christmas prayers could be lifted to Heaven in Bozeman’s first frame structure, the Methodist Episcopal Church, completed that year. Christmas Day liturgy was held in the same place where litigants sought to prove their innocence. The church caretaker made a point of throwing dirt and sawdust on the wood floors to protect it from the tobacco juice spit out by folks when the building served as the Territorial Supreme Court.

Locals could get supplies and goods for their Christmas celebrations from the mercantile store owned by Tuller and Rich Willson, with a new partner who had arrived that year, their brother Lester. Montana State University Archivist Kim Allen Scott has said the 1866 photo of the mercantile, alongside the Empire Corral owned by brother Davis Willson, may be the oldest known photograph of Bozeman.

Davis was also the town’s first schoolteacher and the reverend. He sought to prove to the world that Bozeman did indeed have a pleasant Christmas 150 years ago, when he sent this account of the community’s Christmas reverie to the Virginia City newspaper, The Montana Post, on January 4, 1868:

A “Merry Christmas” and a “Happy New Year” to you and to all Montana. To the miner, the packer, the hunter, the merchant, the mechanic, and all! Aye! What a world of thought and a feeling of hopes and joys rest in those few little words! How often they have been repeated by dear and distant friends, and how, even now, through the “dark, backward, and abysm of time” their echo falls upon the enchanted ear like the rarest and the richest music.

I sit by a blazing fireplace and listen to its murmuring song of comfort, and I see images in the fiery coals that add a sort of melancholy to the time. I look out from my window and the snow is falling—falling fast. From the misty atmosphere comes the memories of the New Year and the Christmas of times past, and what a change! But these little words are still whispering their sweet illusions, and neither time, nor circumstance, nor a suffering soul within could banish them from our hearts. A low howl comes from out of the mountains, and the dark storm clouds are hovering lower! God pity the helpless and the unclad. May we not forget, in our rejoicing, when we repeat the old-time greetings, there is another meaning in them that is half in prayer and half in doubt, when uttered for the poor and the unfortunate.

But with these sober remarks by way of introduction—and in the effort of keeping my communication balanced, should I carry our rejoicings too far—let me here make it known to all the world (for, no doubt, all the world is interested) that we of Bozeman have not been behind them in observing the holidays.

On the eventful Christmas Eve, all the Masons and all those who love the Masons met at the large and spacious Hall, 26 by 60, newly built in this place, for the purpose of having a grand entertainment in the way of dancing. Our company was honored by many friends from the West Gallatin, by our excellent Captain’s lady from Fort Ellis, and by the fort’s many gentlemanly officers—besides many of our fair and brilliant faces who inhabit the homely dwellings of stirring, enterprising Bozeman.

Who in the East shall henceforth say there is no society, no civilization here? To us, no rooms were ever decorated more gorgeously. Chandeliers never shone more brilliantly; hearts never beat more joyfully; music never thrilled more sweetly; refreshments never refreshed more refreshingly; social spirits never associated more socially; the “many twinkling feet” never twinkled to proportionate time or to dulcet airs more airily. Our friend Frazier is about to repeat the entertainment on New Year’s Eve, when we are expected to glide from the old year to the new in the right time.

Bozeman’s boosters had won the day that Christmas. It is still the county seat of Montana’s third most-populous county, Gallatin County, and the Masonic Lodge No. 6, where that Christmas celebration was held, remains active to this day.

Interestingly, “our friend Frazier,” who provided the Christmas entertainment, was none other than George Frazier. The Georgia native and his wife, Elmira, owned the City Hotel and were the last to say goodbye to their lodger, Bozeman, before he left for his fateful journey with Cover.

By 1874, Bozeman’s citizens were celebrating Christmas like many would back East, reports David Walter, author of Christmastime in Montana. He shares an account demonstrating such, published in Bozeman Times on December 29, 1874:

One need not be very aged to remember his Presbyterian grandfather’s holy horror when the Episcopal church bells rang out Christmas, nor the time when Christmas trees were nothing less than Popish abominations. A Gothic window, or a cross upon a steeple was enough to turn any deacon’s stomach in those days—and all the women in the congregation had the cramps at the mention of a Christmas tree. But those times have passed away, and Christmas has become a thing of joy to all in the land.

In accordance with local custom, the Sunday School had its tree on Christmas Eve and, long before the hour, the Church was filled to overflowing. The tree was a very fine one and was loaded down with gifts. After a musical service by the school, the gifts were distributed, under the paternal supervision of Mr. Horr as Santa Claus—who was the exact counterpart of the old man we once imagined popped down the chimneys of our youth.

Every thing passed off pleasantly, and great praise is due the ladies who had the arrangements in charge and who exerted themselves to the utmost to give success to the undertaking.

The last Legislature prohibited the firing of guns or pistols within the town limits, or near any public gatherings. We commend the law to the attention of those who have been celebrating Christmas in Bozeman by the banging of firearms.

Okay, perhaps Bozeman was still a bit uncivilized in how locals celebrated Christmas. Spreading Christmas cheer through gunplay would have been an unusual scene in the civilized East.