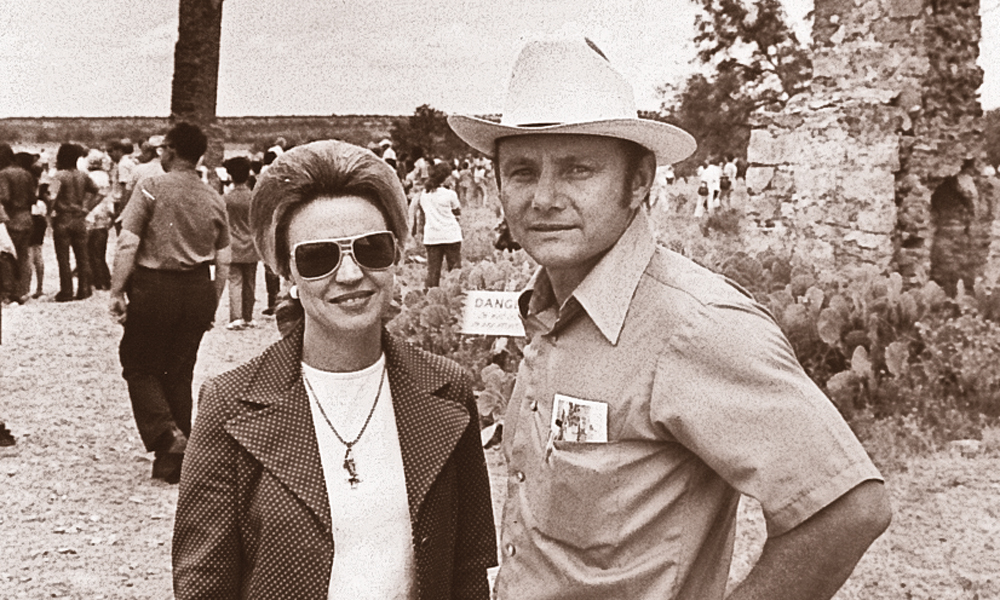 Jim Alexander has always liked November. It’s his birth month—he turns 82 on November 7—and he shares the month with the focus of his life’s work, which has earned him the Chairman’s Award for Exceptional Stewardship of a Historic Property from the Texas Historical Commission.

When Jim was growing up in Jones County in Texas, the ruins “right south of our ranch” were a jumble of stone chimneys and overgrown mesquite trees, he says. His grandfather owned the land, then his uncle. In 1969, Jim bought it.

When he inspected the ruins on the property at the Clear Fork of the Brazos River, he says he found “a real mess. You could hardly see the chimneys.”

But this “mess” began life on a November day too, setting him forward on a project he shared with his late wife, Jerri.

To protect settlers from the Comanches, the U.S. Army founded Fort Phantom Hill on November 14, 1851. It only lasted four years before soldiers departed and it burned to the ground.  In 1858, the fort was brought back to life and served several functions: as a stagecoach and mail stop for the Butterfield Overland route, as a resting point for the Goodnight-Loving cattle trail, as a camp for Confederate soldiers. Then everyone left, and the fort fell to ruin.

Jim and Jerri began a lifetime commitment to restore this piece of Texas history. Now cleaned up, Fort Phantom Hill is open to the public, sunrise to sunset, for free.

“Fort Phantom Hill is a pristine snapshot of a nearly forgotten time in Texas history,” said John L. Nau, III, while presenting Jim his award last December. “Certainly this fort would have vanished into time like so many other sites if not for Jim Alexander’s commitment to its preservation.”

Jim remembers clearing away trees and brush and decades of neglect with his wife. The couple got the site listed on the National Register of Historic Places and worked with experts to develop a long-term plan that included stabilizing the remaining chimneys and ruins. In 1997, the Alexanders deeded the property to the nonprofit Fort Phantom Foundation, and supported and encouraged an in-depth historical study of the site by historian Martha Doty Freeman.

For several years, Jim sponsored a living history rendezvous that drew many, including thousands of schoolchildren. In 2012, he oversaw the construction of a stone pavilion that featured a kiosk offering history for self-guided tours.

The fort is in West Texas, along the 650-mile Texas Forts Trail. “It’s kind of a lonely ol’ place,” Jim says. “It’s amazing how many people go out there.”

Jim still lives on his family ranch, still visits the fort regularly and still celebrates his connection to Texas history every November.