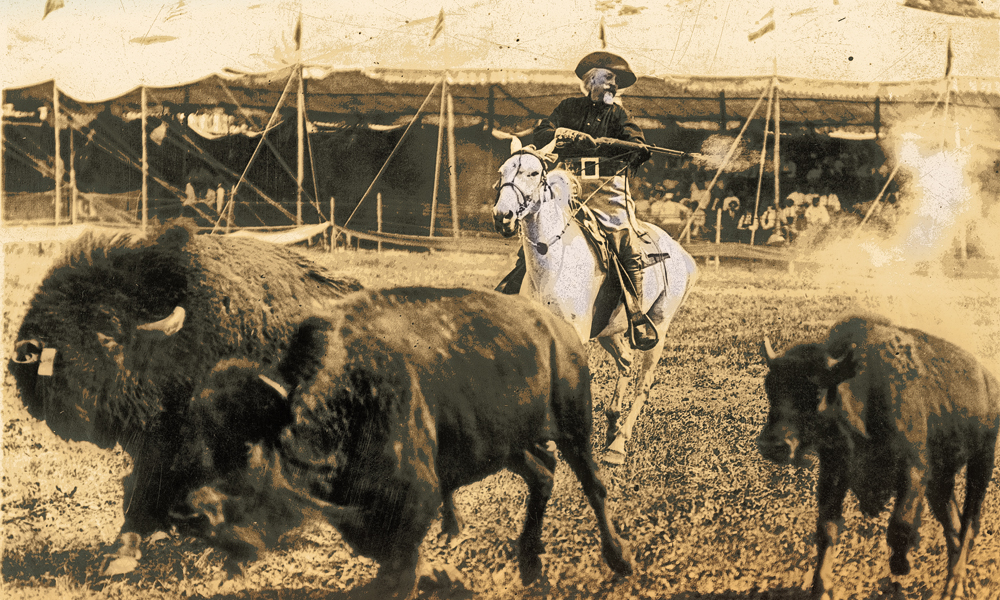 Loved and respected by royalty as well as the common man, William F. “Buffalo Bill” Cody embodied the spirit of the American frontier and was our country’s first superstar. Pony Express rider, bull whacker, teamster, buffalo hunter, army scout and Wild West showman—Buffalo Bill did it all. Just a few weeks after his passing in 1917, the Buffalo Bill Memorial Association was formed in Cody, Wyoming, to honor and perpetuate his legacy.

By 1927 a small museum was set up in a log cabin that has continually grown to become the Buffalo Bill Center of the West, which includes five museums in one modern building covering seven acres. One of the five, the Cody Firearms Museum, was officially dedicated in 1991 and occupies about 35,000 square feet, and has 4,000 of the museum’s 8,000-plus guns on display. Along with several of Colonel Cody’s personal guns, the museum’s comprehensive collection includes arms and related artifacts from all over the world, dating from the 16th century to modern times. Following are 10 fantastic Old West-related firearms from the Buffalo Bill Center of the West—some included here strictly for their historical significance and others for their intrinsic beauty and embellishment. Read on and enjoy a sampling of the firearms wonders of one of the world’s finest gun collections. 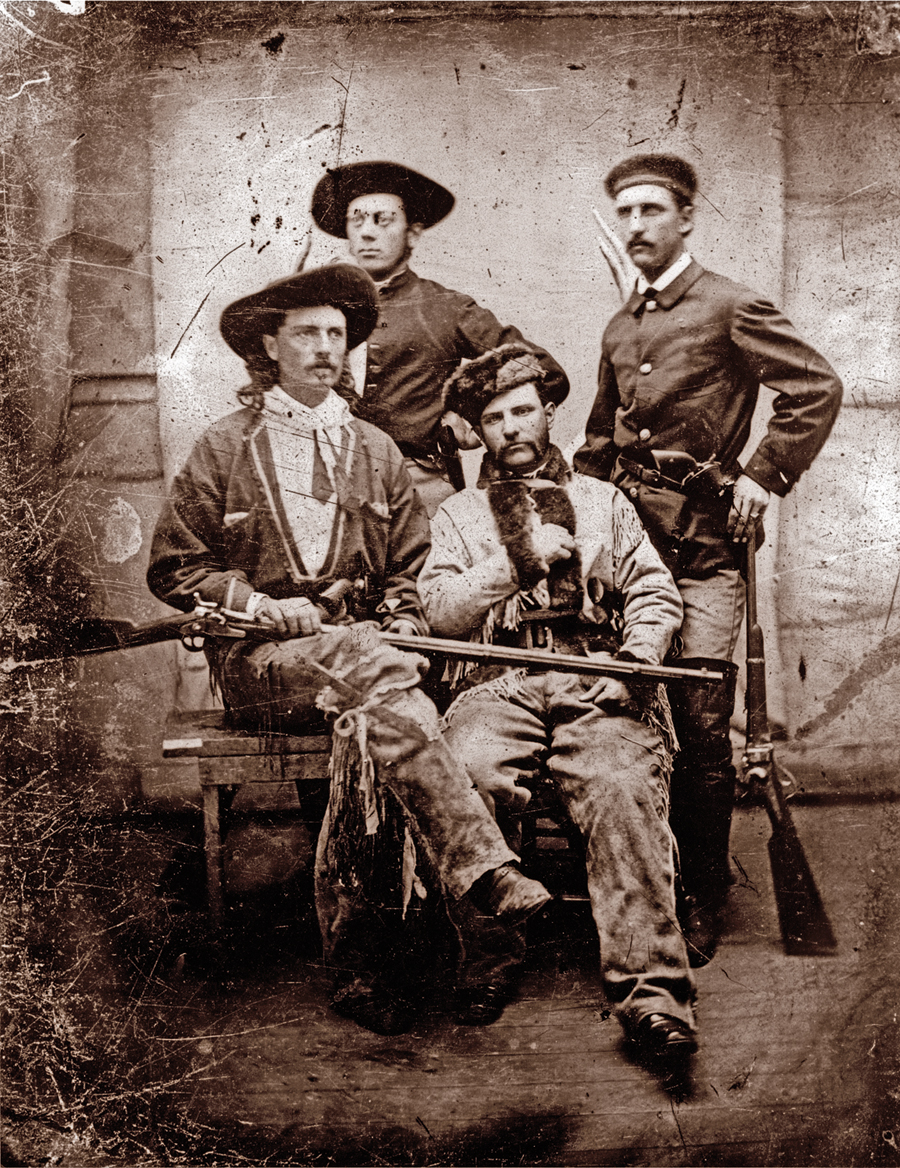 Although this .50-70 caliber, 2nd Model Allin Springfield rifle is in relic condition, it holds great Cody historical significance. Converted by the government from a .58 caliber Civil War rifle-musket to a metallic cartridge arm, this is all that survives of Buffalo Bill’s original companion during his time as a meat hunter for the Kansas Pacific Railroad. It was also the rifle he ran buffalo with while mounted on Brigham, his famed buffalo-running horse, and was the gun that helped him beat another buffalo hunter, Billy Comstock, during the 1869 contest for the title of World Champion Buffalo Hunter. Cody affectionately nicknamed this early trapdoor “Lucretia Borgia,” after the renaissance-era femme fatale duchess, because he saw this sure-shooting rifle as beautiful but deadly. 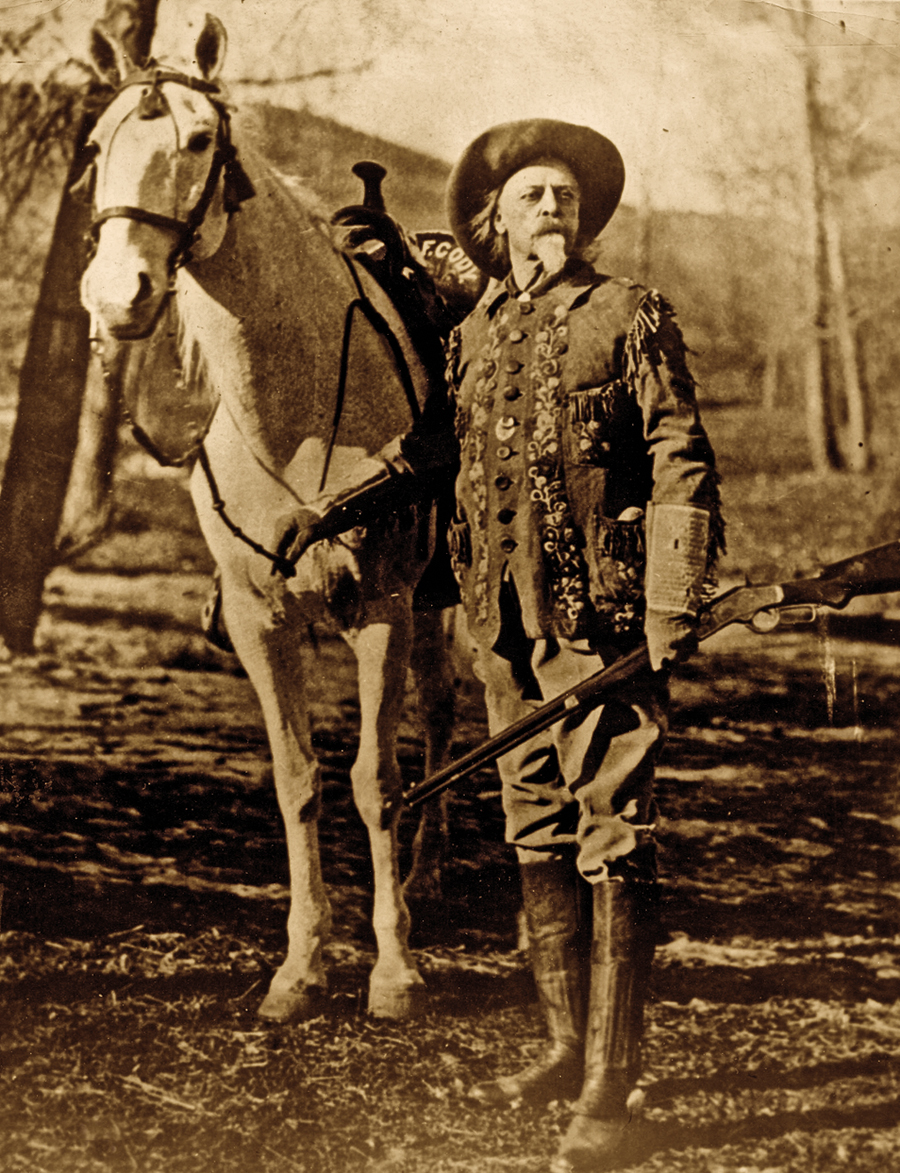 Buffalo Bill Cody undoubtedly owned many guns during his lifetime; several of them were presentation pieces, but those the showman actually used are the arms that stir the imagination. One such rifle is this 1873 Winchester lever-action in .44 WCF (Winchester Central Fire) caliber. Fitted with a standard 24-inch blued barrel, a deluxe pistol-grip and hand-checkered walnut stock and forearm, this rifle has an exquisitely engraved gold-plated receiver. The right side’s motif is a standing buffalo surrounded by elaborate scrollwork, while the receiver’s left side depicts Cody himself, on horseback and chasing a running buffalo. Showing wear, probably from use in his performances, this is a classic and ornate saddle rifle, used by one of the world’s most famous horsemen. 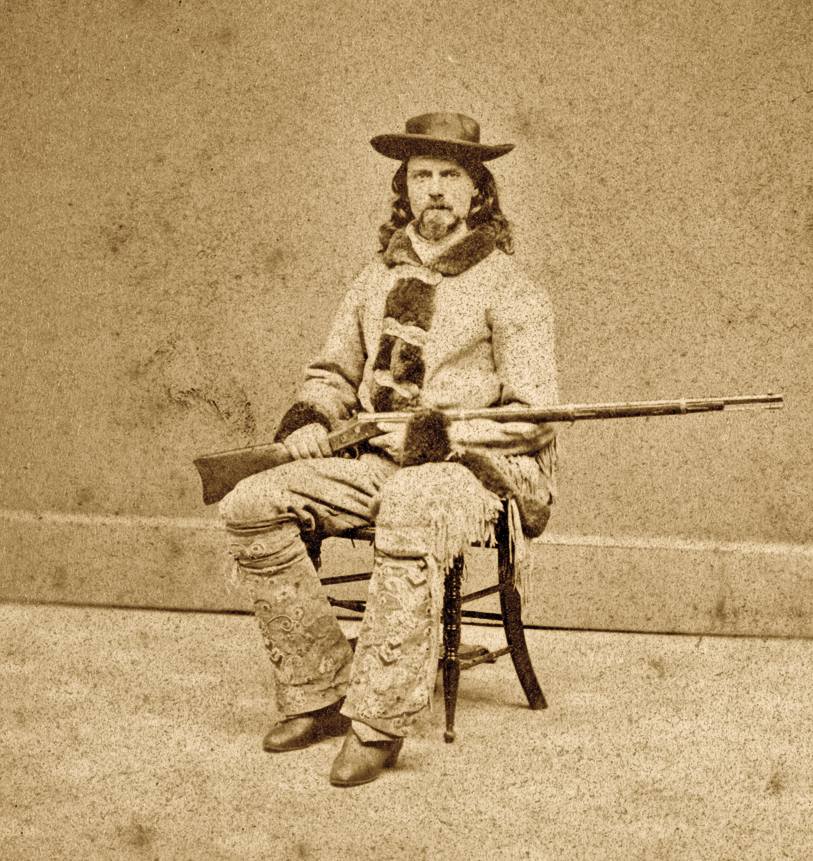 This Remington No. 1 military-style rifle is believed to have been given to Cody by the Remington family. With its low serial number 3 and the gold-plated hammer and block with a fern-like design engraved into them, as well as the wrist of the stock, this .45-70 caliber, 35-inch long, three-band rifle bears more of a special presentation appearance than a martially issued arm. Another of the guns actually carried by Buffalo Bill, this .45-70 appears in an 1870s photo of him with it across his lap. Cody gave it to his good friend, Moses Kerngood, in 1875, and was in turn gifted to the Buffalo Bill Center of the West by friends of Kerngood, in memory of him. 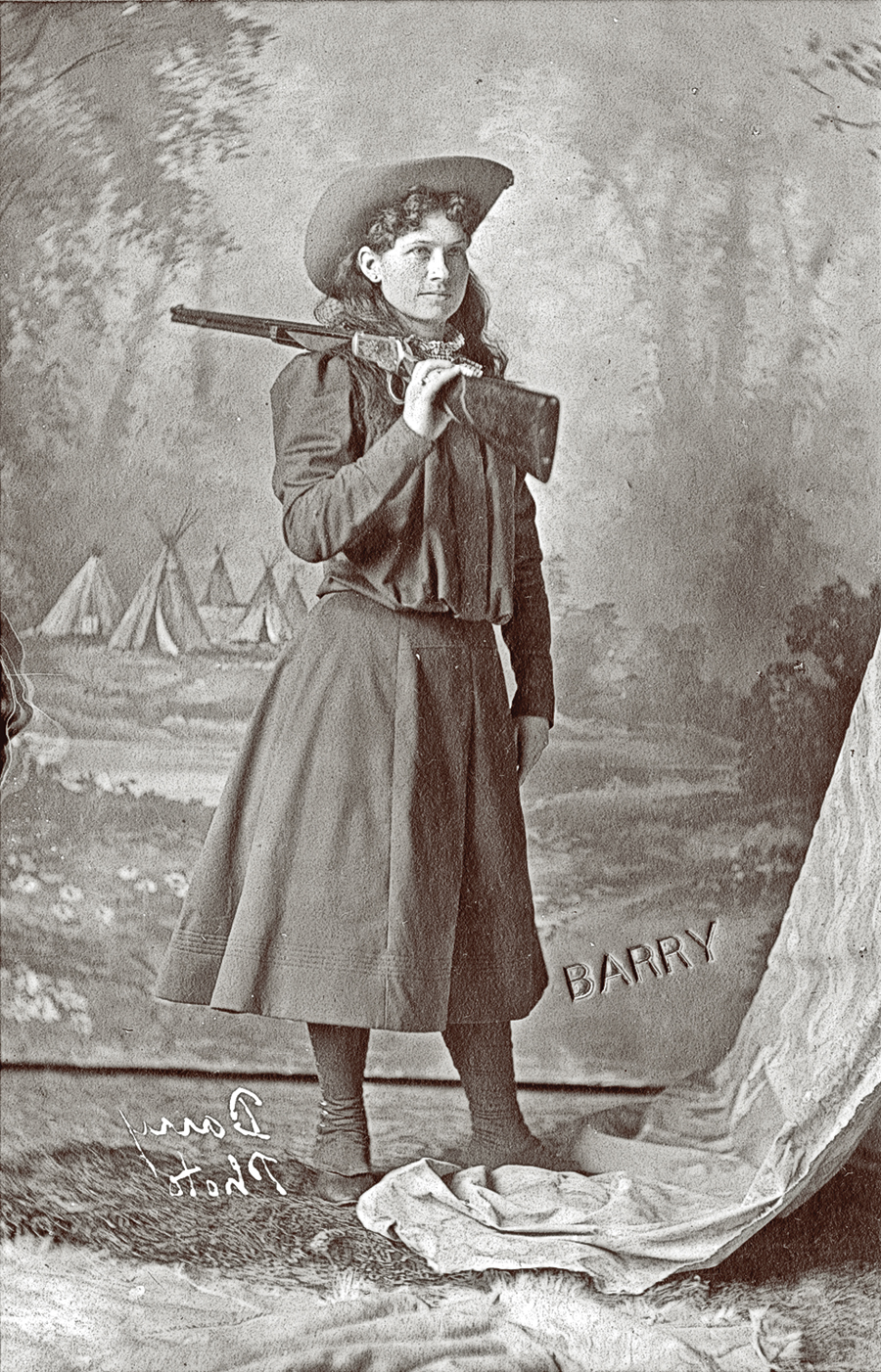 Perhaps no one is linked more closely to Buffalo Bill Cody than “Little Sure Shot,” Annie Oakley herself. Here’s one of this legendary sharpshooter’s personal firearms. This elaborately engraved .44-40 caliber, 1892 Winchester rifle, with a 22-inch half round/half octagon blued smoothbore barrel, comfortable shotgun butt plate and a hand-checkered walnut stock and forearm, was custom-made for Annie and actually used in her famed performances in Buffalo Bill’s Wild West show. Handsomely adorned in engraved foliate designs with a ram on the receiver’s left side, and a deer on its right side, the gun shows the telltale signs of usage, but also of loving care, as would be given by someone who makes their living with it. 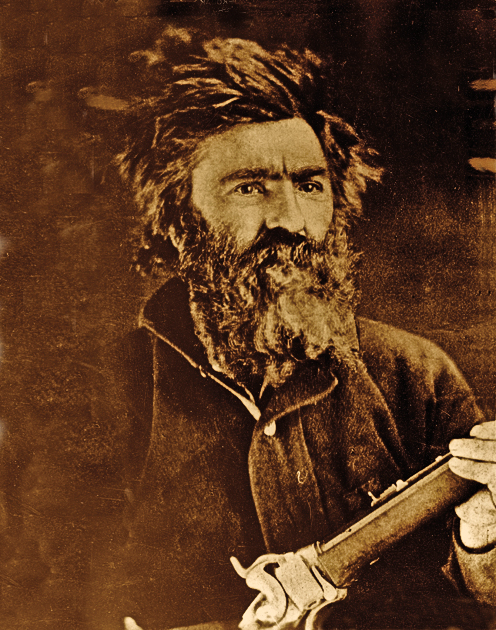 Undoubtedly the most famous name in Plains Rifles, the St. Louis, Missouri, Hawken rifle, also known as the “Rocky Mountain Rifle,” was a primary muzzle-loader of the fur trapper and mountain man. Frontiersman John Johnston is shown here in a later photo with a Sharps rifle. He was known as  “liver eating Johnston,” or “Crow Killer,” because Old West yarns tell of his supposed vendetta against the Crow Indian tribe, where he ate the liver of his enemies for killing his Flathead Indian wife. Whether or not this is true, he was a skilled outdoorsman who hunted, trapped, scouted, served as a soldier and worked as a Montana lawman. His Hawken is a .56 caliber rifle weighing 12-plus pounds, with a 31¼-inch-long octagonal barrel. It’s a prime example of one of the famed working guns of the American West. 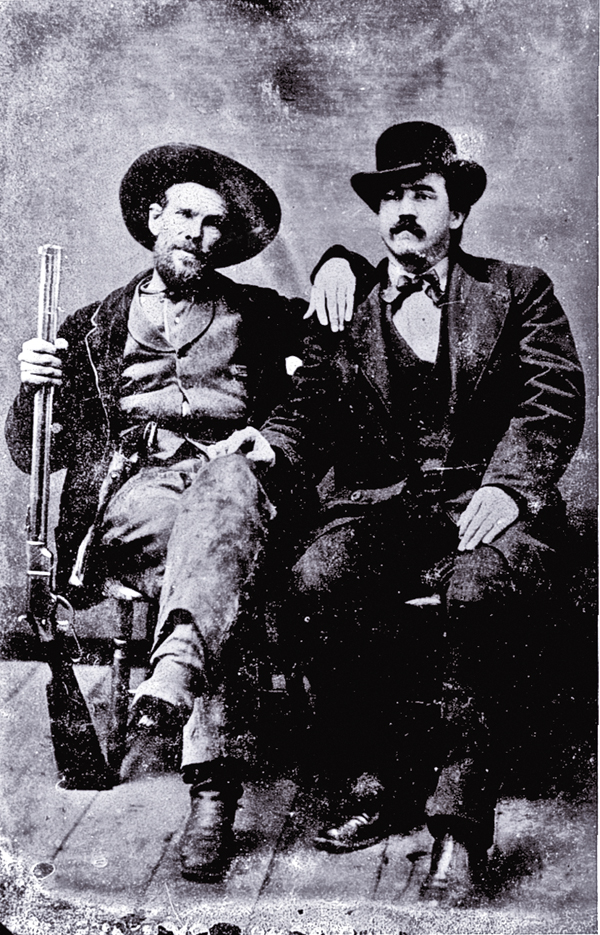 The gun that revolutionized repeating rifles, the Model 1860 Henry, is one of the most sought-after firearms by collectors, but due to its limited production (1862-1866), with only around 14,000 manufactured, it’s a coveted trophy. The Cody Firearms Museum has several, and among them are beautiful engraved examples like this silver-plated and ornately embellished Henry with its floral and scroll engraving. Dubbed as that “Damned Yankee rifle that you load on Sunday and shoot all week,” by Confederates during the Civil War, this “sixteen shooter” went on to see use on the frontier and was the parent gun of the later lever-action Winchesters. Virtually every lever gun—regardless of maker—since then owes a debt to this .44 rimfire rifle and its designer B. Tyler Henry. 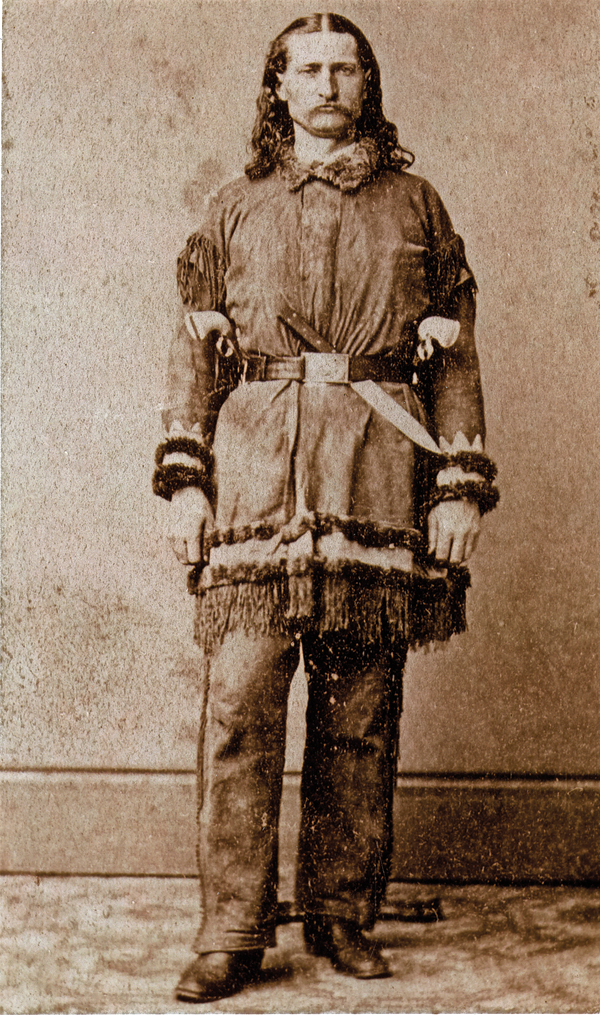 Although James Butler “Wild Bill” Hickok was known to have used several different sixguns during his life, it was Colt’s .36 caliber, 1851 Navy revolver that was his favorite sidearm. The Cody Firearms Museum displays one of Hickok’s actual Navy Colts among the many documented arms of famous Old West gun owners. This “percussion peacemaker” was reportedly sold to pay for the gunfighter’s burial expenses after he was murdered in Deadwood, South Dakota Territory, in 1876. Despite the signs of use and wear on this 7 ½-inch octagon barreled, ivory-stocked and scroll-engraved cap and ball pistol, it never fails to conjure up stirring images of the “Prince of Pistoleers,” and has long been one of the Cody Firearms Museum’s most popular attractions. 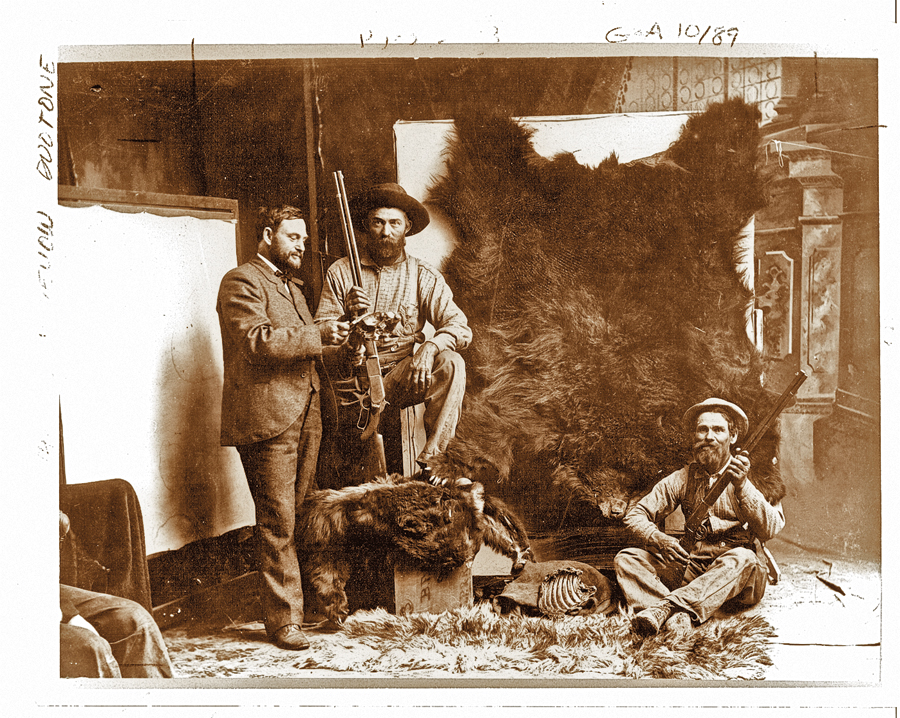 The legendary “One of One Thousand” Winchesters are scarcities to begin with, and the 76′ model is the rarest of this breed with only 54 ever produced. The Cody Firearms Museum’s example, from the famous James E. Serven collection, is a. 45-60 caliber rifle sporting a standard 28-inch octagon barrel, color case hardened receiver, tang sight and a hand-checkered pistol-grip stock and forearm. It’s further decorated with the script “One of One Thousand” legend on top of the barrel at the breech, along with scroll engraving and a silver inlaid band at each end. Its front sight is the traditional blade, but with a small ivory inset. Produced in 1880, this is the very first Winchester of that very special model. 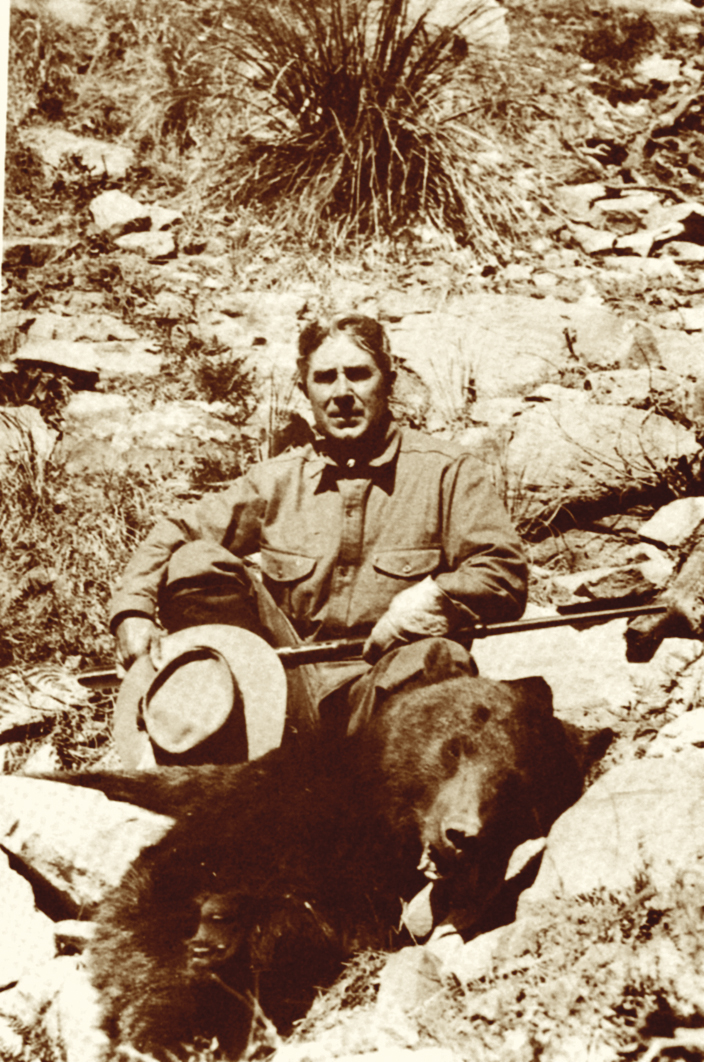 The writer whose classic novels, filled with vividly described characters and Western landscapes, inspired so many writers and movie and television producers, owned this rifle which is as captivating and exciting as his sagebrush sagas. This beautiful 1895 Winchester lever-action rifle—a scarce take-down model—is profusely engraved in scroll and floral motifs, even on its lever. Further enhancing this incredible firearm is Zane Grey’s “ZG” monogram in solid gold, along with a multi-shaded golden elk and wreath inlaid on the receiver’s left side, and a gilt bear in a hued woodland scene on the right side. Hand-checkering on the premium walnut stock and forearm, along with more engraving found on the 24-inch blued barrel, finish off this one-of-a-kind Winchester—a truly unique example of the gunmaker’s artistry. 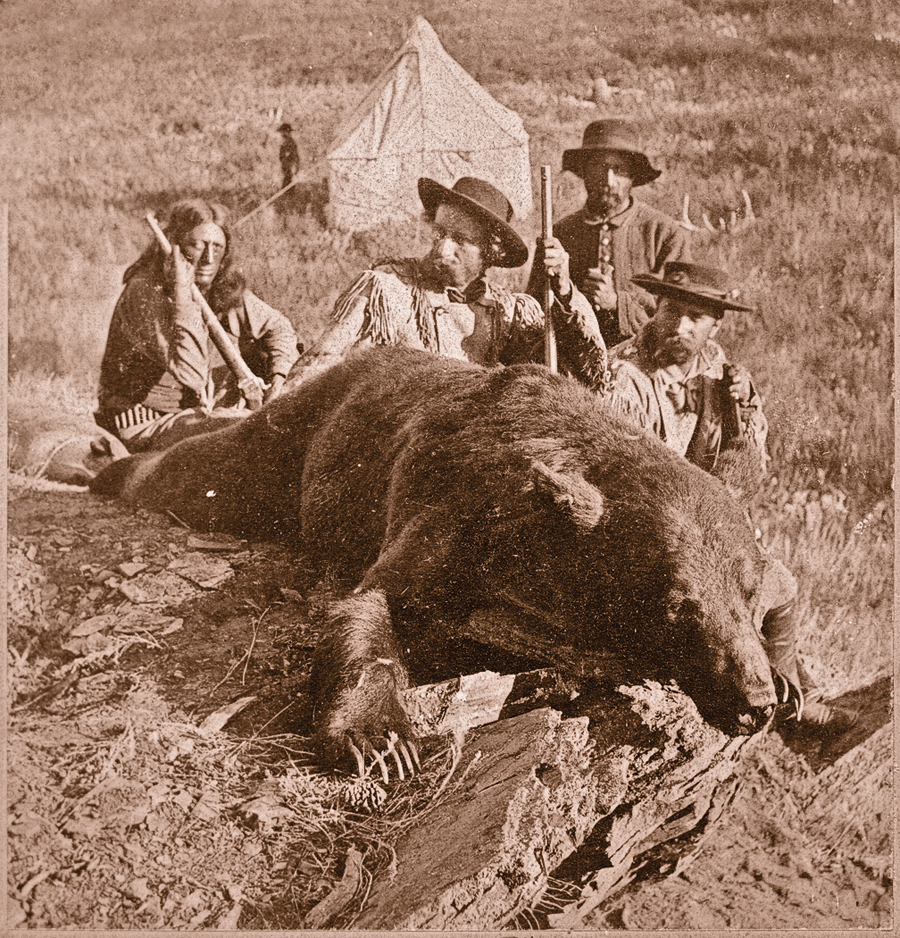 This 1853 model “slant breech” Sharps, percussion Sporting Rifle is well documented as being the personal property of Lt. Col. George Armstrong Custer, given to Winchester by Custer’s widow, Elizabeth. Custer was an avid hunter and followed his passion for taking game while on campaign. This .44 caliber breech loading rifle, manufactured sometime between 1854 and 1859, would have most likely been used by “Yellow Hair” in the West of the late 1860s, when percussion firearms were still viable weapons. Its select wood stock with the color case hardened iron patchbox, and the forearm with the pewter fore end, sets off the color cased receiver and scarce (only 110 made) blued half round/half octagon 26-inch barrel. This is one of the Cody Firearms Museum’s rare and historically significant guns.