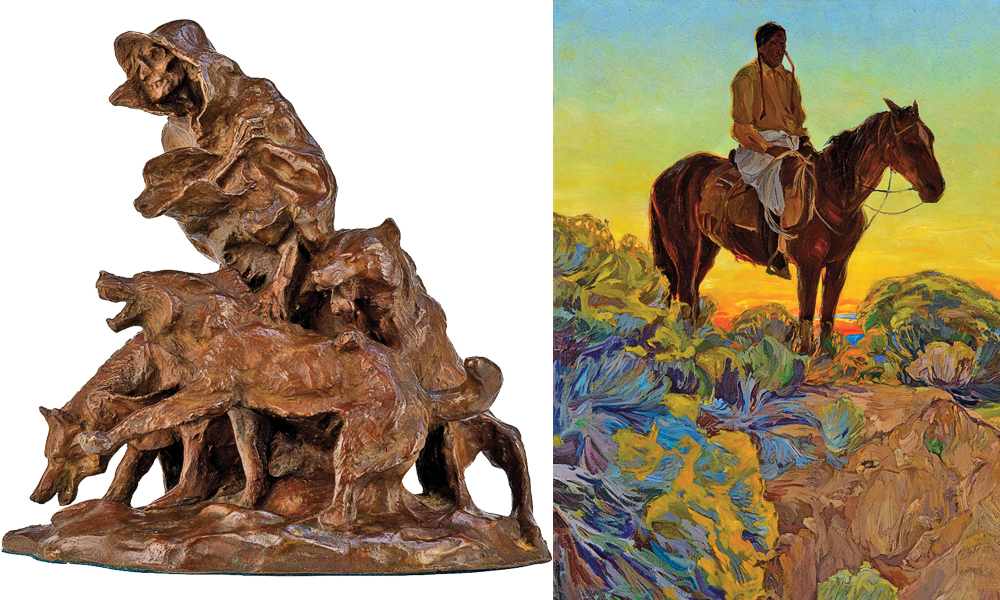 “Any time I cash in now, I win,” Charles M. Russell wrote, a few months before his death on October 24, 1926, in the introduction for his short story collection, Trails Plowed Under.

Although suffering from a bad back, decaying teeth, shortness of breath and a goiter problem for which he had an operation that July, Russell still worked on his art. Through all that pain, he sculpted Spirit of Winter, a bronze that Russell historian Brian C. Dippie has stated best illustrates the artist’s own indescribable spirit.

The grisly figure, surrounded by snarling wolves, represented the torment and suffering of the Blackfoot and Crows during the Starvation Winter of 1883-84, twenty years after Russell was born. The artist’s personal torment in these last days of his life moved through his hands onto the clay that shaped this powerful bronze.

During his cowboy years in the Judith Basin, Russell sought to help the destitute Indians who continued to suffer past that notoriously bad starvation winter, with no help from the federal government. “It doesn’t look very good for the people of Montana if they will sit still and see a lot of women and children starve to death in this kind of weather,” Russell wrote in 1909 in the Great Falls Tribune.

Russell’s attitude differed from the prevailing view in Montana, as expressed by Robert Sutherlin in an 1885 Mineral Argus editorial:  “During the past summer small lodges of Bloods, Piegans and Crows have been prowling around the Musselshell, Judith and Missouri valleys, killing stock and stealing horses…. The ‘Noble (?) Red Man’…must remain on the grounds set aside for this exclusive occupation…yet the big-hearted, philanthropical, goggle-eyed, heathen converter and Indian civilizer of Yankeedom cannot understand it and will probably protest.”

Russell lived to sculpt this one last protest on behalf of the approximately 600 Piegans who died during that Starvation Winter because they did not receive the promised food rations from the federal government. It was not the first time he had tried to tell their story. His winter scene of starving Crow who shot a range cow and are discovered by two cowboys while butchering the animal, Caught in the Act, appeared in the May 12, 1888, issue of Harper’s Weekly.  The caption illustrates how close in depiction the bronze is to the illustration: “The starving Indians, with their savage faces, are even more grim from hunger. The gaunt, sore-backed horses are humped by the cold. There are the scurvy dogs that, wolf-like, are snarling as they scent the blood-drops in the snow.”

Ninety years after the dying artist sculpted Spirit of Winter, the bronze, one of only 10 lifetime casts, was sold among notable American West artworks at the Coeur d’Alene Art Auction in Reno, Nevada, on July 23, which earned collectors nearly $16 million.