Bread Across the West 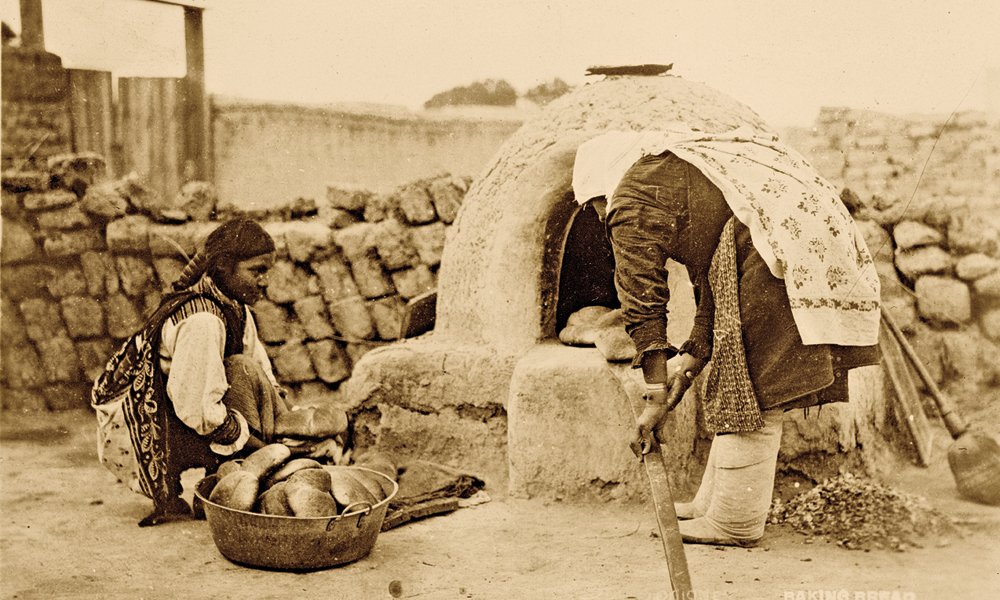 “Vile stuff” that suggested the “properties of poison” turned the bread a “green-yellow tinge” at the Pony Express station near Wyoming Territory’s Fort Laramie. Then British explorer Richard Francis Burton came across a different type of bread: “A hundred-fold better,” he wrote, “the unpretending chapati, flapjack, scone, or, as the Mexicans prettily called it, ‘tortilla!’”

Even though he found this bread more pleasing, he suffered from what he called the “travelers’ bane”—the tortilla tasted like the “rusty bacon and graveolent antelope” that it was placed near while cooking on “Uncle Sam’s stove,” better known as the dutch oven.

Bread came in many forms, shapes, sizes and flavors on the American frontier. Vast immigrant influences introduced rye, pumpernickel and sourdough next to the more traditional golden sandwich loaf.

Southwestern tribes made tortillas from blue, yellow, white and black corn, baking them over an open flame or in the ashes of a fire. Indians swapped the tortilla for flatbread, also deep fried into fry bread, when colonizers gave them flour rations over the preferred corn masa.

To make a slightly thicker flatbread, Indians ground nuts, such as acorns and piñons, and combined the nut flour with corn. They baked this flatbread over hot rocks until the edges were golden brown. Different tribes made their own versions of flatbreads, such as ultra-thin Piki and dense Bannock. They also made the precursor to corn bread, called Indian bread, which was dense and made of cracked corn or cornmeal, water and salt.

Even though tortillas were considered lower-class fare, they were once touted as a remedy to cure indigestion. “The person who originated the scheme has been cured in four weeks by eating tortillas made from corn meal and the Rio Grande water, and any dyspeptic who can eat tortillas for four weeks and survive is certain of encouragement…,” reported the Arizona Weekly Star, on December 9, 1880.

A German baker created the Parker House Rolls, which was among the recipes pioneers brought West with them. Baked at the Parker House hotel in Boston, Massachusetts, after opening in 1855, these moist and fluffy rolls appeared on restaurant menus and sold in bakeries all over the frontier. Try your hand at the historic delicacy!

Mix milk, water, salt, sugar and butter in a bowl. Add yeast, then flour, until the mixture is stiff enough to knead. Cover the bowl and let dough rise to double its bulk. Shape into two-dozen balls, put into a buttered pan and cover. Place in a warm place so can rise to double its bulk. With the floured handle of a wooden spoon, press the balls through the center, almost cutting in half. Brush one half with butter, fold over the other half and press together like a pocketbook. Let it rise again and bake in a 400˚F oven for 15 minutes. After baking, brush the tops with butter.