A Treaty Goes Up in Smoke 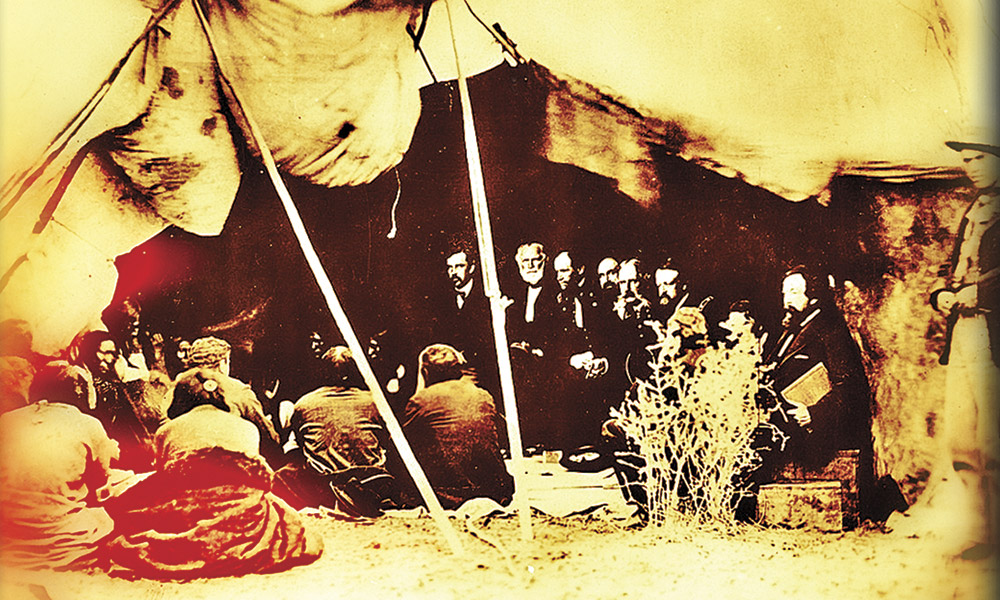 For two long years, starting in 1866, the U.S. Army tried to build and maintain forts in the Powder River Country in present-day Wyoming. The plan: protect white pioneers and finish the Transcontinental Railroad. American Indians of the area fought back.

The result: hundreds of whites were killed, and traffic along the Bozeman Trail basically came to a halt. Work on the railroad was threatened. The Army couldn’t fight a guerrilla war, so government officials pushed for a peaceful solution to the conflict named after the great Lakota leader Red Cloud.

So it was that the various bands of the Sioux and Arapaho nation came to Fort Laramie to sign a treaty with the U.S. on April 29, 1868.  The terms were simple and similar to ones from previous agreements.

“All war between the tribes and the U.S. government and its citizens would cease. The Lakotas were assigned a reservation that fell in the bounds of present-day South Dakota west of the Missouri River,” Indian Wars expert Greg Michno says the treaty stipulated.

“The Indians promised to send their children to school. They relinquished the right to occupy any other land. They pledged to withdraw all opposition to any current or future military posts, and not to oppose railroads in existence or later to be constructed. The United States, in turn, agreed to abandon its posts along the Bozeman Trail and close the road within 90 days.”

But Red Cloud, perhaps the most important Indian leader, was not there that day, refusing to sign until November 6, once the Army abandoned its Bozeman Trail forts. The war went on—although Red Cloud himself stayed on the reservation.

Both whites and Indians violated the treaty countless times by 1874, when Lt. Col. George A. Custer led the 7th Cavalry into the Black Hills in Dakota Territory, looking to survey the area for a potential fort site and searching for gold.

A gold rush ensued, leading to even more confrontations between the government and the tribes.  That would culminate in the Battle of the Little Big Horn in 1876—another temporary victory for the Indians that soon turned into a final defeat for the Plains tribes.

In many ways, the Treaty of Fort Laramie was the beginning of the end. Red Cloud’s War was a pyrrhic victory at best, enshrined on paper, but worth little to the Indians.

In 1980, the Sioux won one more battle, suing the federal government for illegally taking the Black Hills land more than a century before. The U.S. Supreme Court agreed and awarded the tribe more than $105 million.

The Sioux refused the money. They demand the land be returned—under the terms of the Treaty of Fort Laramie of 1868.