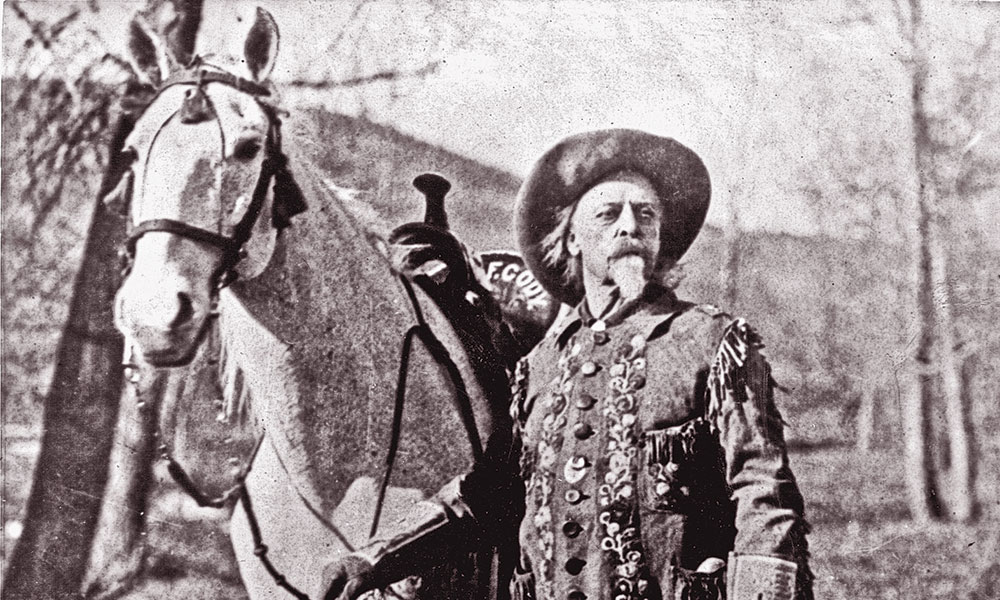 Although Buffalo Bill Cody used a number of guns and horses throughout his colorful career, there was one special rifle and one amazing horse that he held in especially
high esteem.

A catchy jingle that was said to have originated while William F. “Buffalo Bill” Cody was hunting bison for the Union Pacific, Eastern Division (later changed to Kansas Pacific in 1868), and attesting to Cody’s hunting prowess goes: “Buffalo Bill, Buffalo Bill, Never missed and never will, Always aims and shoots to kill, And the company pays his buffalo bill.”

While we’ve seen numerous photos of Buffalo Bill packing his ornately embellished 1873 Winchester during his Wild West Show days, there are fewer photos of him with his saddle companions from his frontier years.

During Cody’s early scouting and buffalo-hunting days, he often carried a heavy Springfield, Model 1866, .50-70 Allin conversion, best known on the frontier as the “needle gun,” due to its long firing pin. Cody named his single-shot rifle “Lucretia Borgia,” because, like the infamous noblewoman of Renaissance Italy, she was “beautiful, but deadly.”

It was this ungainly, 56-inch long rifle that Cody used with such ease and effectiveness during his celebrated contest with buffalo hunter Billy Comstock when they competed for $500 and the title of “Champion Buffalo Hunter.” Comstock relied on a less powerful, but faster-shooting Henry .44 rimfire repeater, while Cody stuck to his trusted “Lucretia Borgia.” At the end of the daylong match, Cody had killed 69 buffalo to Comstock’s 46.

Buffalo Bill’s most celebrated horse during his early frontier period, and the one he rode in the competition with Billy Comstock, was “Brigham.” Although few details of this horse are known beyond the fact that he was a small, dark-colored, and, by all accounts, unattractive animal, he was as fast and trustworthy as any mount owned in the West of the time. Cody referred to Brigham as the “fleetest steed I ever owned.” Brigham was purchased from a Ute Indian in Utah, then under the leadership of Mormon prophet Brigham Young.

During the ensuing run, in which he and his fleet pony took the lead, Cody approached to within about a hundred yards of the rear of the small herd. He recalled, “I pulled the blind-bridle from my horse, who knew as well as I did that we were out for buffalo—as he was a trained hunter.

The moment the bridle was off, he started at the top of his speed, running in ahead of the officers, and within a few jumps he brought me alongside the rear buffalo. Raising Lucretia Borgia to my shoulder, I fired, and killed the animal at the first shot. My horse then carried me alongside the next one, not ten feet away, and I dropped him at the next fire. As soon as one buffalo would fall, Brigham would take me so close to the next, that I could almost touch it with my gun…”

While this may sound like a frontier “windy,” eyewitness accounts confirm that Cody had killed 11 buffalo with 12 shots by the conclusion of that run. Further, he actually named the officers involved in the incident, and the names of these men and the circumstances all check out historically.

Interestingly, after this exciting chase, Cody made a present of the tongues and tenderloins to the officers, then loaded a wagon with the hindquarters in order to feed the local workmen. It’s no wonder that Lucretia Borgia and Brigham were among Buffalo Bill’s favorite saddle pals.