Did “Buffalo Bill” Cody Ever Ride for the Pony Express? 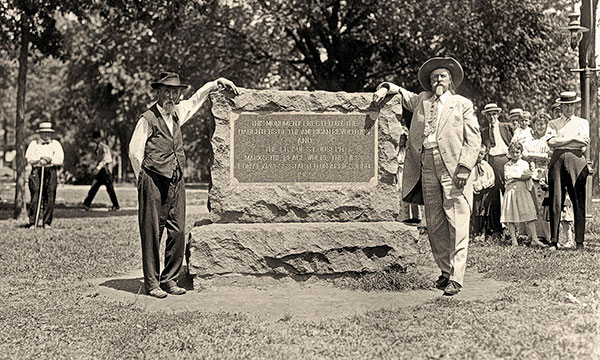 For more than 30 years, our historical consultant, Paul Andrew Hutton, has been arguing with historians over whether or not “Buffalo Bill” Cody rode for the Pony Express.

The argument flares up every now and again, inflamed most recently by a statement released by Sandra K. Sagala, when she examined Cody’s biography on the 165th anniversary of his birth. She reported that “John S. Gray offers convincing arguments that [Cody] did not [ride]” in the 1985 Kansas History article Gray wrote, “Fact versus Fiction in the Kansas Boyhood of Buffalo Bill.”

Gray, she says, stated that Cody’s autobiographical yarn relied on the subjective memories of the showman’s sister Julia and of his first employer, Alexander Majors. Because Cody funded the printing of Majors’ autobiography, Sagala argues that provided “some incentive for Majors to stretch the truth.” Gray concluded that Cody was not riding the pony, but studying under teacher Valentine Devinny in the area of Leavenworth, Kansas.

Sagala is an excellent researcher, and we are big fans of her Buffalo Bill on the Silver Screen book. But Hutton and others argue that she, along with other Buffalo Bill historians, has misunderstood Gray. “Sagala, Warren [Louis Warren, author of Buffalo Bill’s America] and others who have relied on the John Gray article have not read it closely enough,” says Paul Fees, the retired curator for the Buffalo Bill Museum at the Buffalo Bill Center of the West in Cody, Wyoming.

As to Gray’s point that Cody was learning his three Rs from schoolmaster Devinny, Fees agrees that Cody attended, but adds “his attendance was not continuous and the dates of the schooling are not known.”

The overall premise presented by Gray is faulty, Fee says: “Gray was writing a brief. He set out with the intention of proving that Cody did not ride for the Pony Express. His wonderfully detailed re-creation of the life of Willie and his family begins with their move to Kansas, and is convincing through the first part of 1860. Then, as the records become scantier, Gray’s attention to the evidence becomes more tenuous. He winds up speculating in the way a prosecutor might:  ‘Buffalo Bill was wrong so often that he must be wrong here as well.  In the absence of proof that he rode, we can only conclude that he did not ride.’ It’s a specious argument.”

Hutton argues that none of the people associated with Russell, Majors & Waddell—the principals or the pony riders themselves—ever denied that Buffalo Bill was a Pony Express rider. Fees agrees, adding that documentation of the riders is a rarity anyway, outside of the few riders whose names were cited in newspaper articles.

Fees settles this issue for us, by pointing to the Cody entry he wrote for the four-volume Encyclopedia of the American West: “It has been generally assumed, not without controversy, that Cody rode for the Pony Express at age fourteen or fifteen. Because of internal contradictions in his autobiography, scholars have made a good argument for denying his participation.

“However, most of his actions in 1860 and 1861 cannot be independently verified. The crucial role he and his Wild West show later played in commemorating the Pony Express, and his friendship with men central to the enterprise, both cloud the issue and in some ways make the debate irrelevant.

“In the absence of other records, the most it may be possible to say is that as a skilled horseman, an adventurous youth, and an erstwhile employee of the company, Bill was in the right place at the right time.”