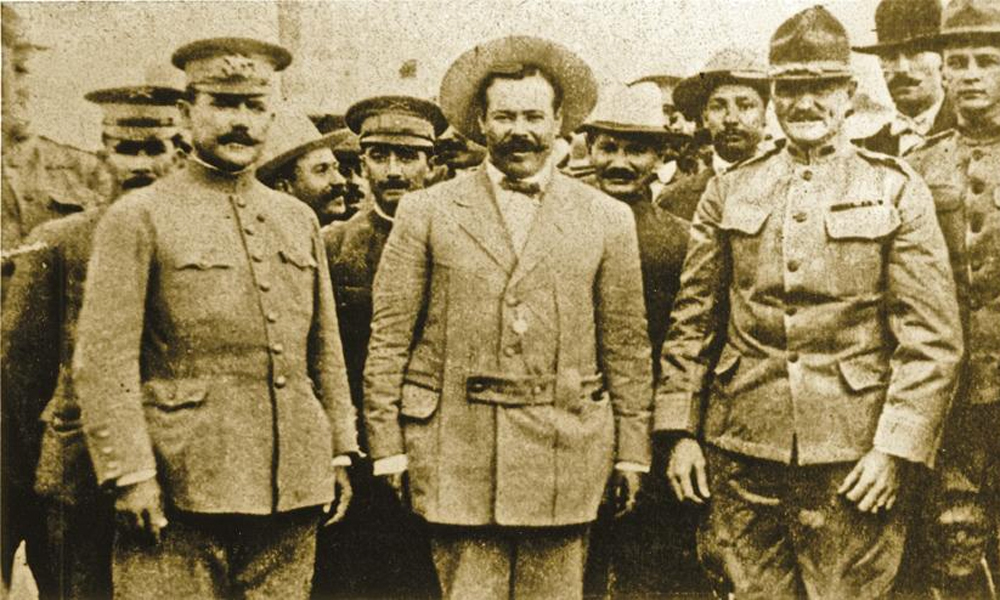 At one time Pancho Villa got an American film company from Hollywood to make a war movie from one of his battles.  He even offered to attack at a time of day when the light was best for the cameras.  A movie, called, The Life of General Villa, was made but failed at the box office because the American audiences didn’t think it was “realistic” enough.  Villa also hired American barnstorming pilots to fly over the enemy trenches and drop homemade bombs.  It’s believed the first aerial combat in history took place in the blue skies over Naco, Sonora.  Dean Lamb and Phil Roder were a couple of American barnstorming pilots who joined the action.  Lamb flew for Villa, while Roder was in the employ of the federales. The planes had no guns so the pair emptied their six-shooters at each other in the skies high over Naco and then flew off into the wild blue yonder.

During a land battle near Douglas, several bullets flew into American homes. Spectators gathered on the roof of the Gadsden Hotel to watch the action. A stray bullet went through an open window and shot the tail feathers off a parakeet.

At one point the Sheriff of Cochise County, Harry Wheeler, rode out between the armies carrying a white flag.  He got the two opposing Mexican generals together and asked them to move their men so they wouldn’t be shooting towards the American side.  The generals obliged and the battle resumed.

Although Pancho Villa had many friends in the U.S. President Woodrow Wilson decided to throw his support to Carranza and allowed him to move his troops along the border on the American side using American railroads to transport them.  Wilson accused Villa of allowing his soldiers to murder, rape and pillage the people of Mexico.  However, it should be noted, the Carranzistas were guilty of the same crimes.  Villa was also accused of murdering many foreigners, including Americans.

In October, 1915, Wilson recognized the government of Carranza and cut off military arms to Villa.  By 1916, the once-popular patriot had fallen on hard times. Only the lowly peasants still believed in Pancho Villa.  He was convinced the Americans were the cause of his trouble and vowed to take revenge.  Revenge came at Columbus, New Mexico.

Following the raid on Columbus, Wilson ordered General John J. Pershing to take an army and cross the border into Mexico to capture or kill Pancho Villa.  Villa proved to be an elusive target. Rumors spread far and wide.  Villa was supposed to be everywhere, attacking American cities from Texas to Arizona.  In Arizona he’d become a ubiquitous Mexican bogyman. One rumor had it Villa and his men had ridden into Arizona and were going to blow up Theodore Roosevelt Dam and wipe out all the cities in the Salt River Valley.  While they were visiting the state, the Villistas were planning to rob all the banks in the Phoenix area.  Nervous bankers were issuing rifles to the citizenry and women were taking Red Cross training to treat the expected wounded. No doubt Villa was amused by all the hysterical chaos he was creating.

The American Army chased Pancho Villa across the mountains and high deserts of Mexico for nearly a year.  Apaches were used as scouts; troops drove across the sandy desert in primitive automobiles and airplanes flew the skies.  All searched in vain for the phantom bandito.  Villa seemed to be everywhere and nowhere.  To the peasants, he became an even bigger hero.  Legends about him grew.  One story said that when the Americanos got close to Villa he transformed into an agave plant.  Others claimed he became an antelope and outran his foes.  Still another said he turned into a little black dog and was seen barking and nipping at the heels of his pursuer’s horses.  Villa himself said the ghost of his dead mother came to him in a vision and gave warning when the Americanos were getting close.

Eleven months after entering Mexico, the American Army returned to Texas.  The so-called Punitive Expedition had failed in its mission to catch Villa.  Still, the Americans had succeeded in scattering his army and turning it to rabble. In April, 1917, America declared war on Germany and General Pershing was named commander of the American forces going to Europe.

Mexico had proven to be a good training ground for the Americans.  They could thank Pancho Villa for that.  This would be America’s last campaign using the horse cavalry in battle and the first use of airplanes, automobiles and automatic weapons.

Pancho Villa became a national hero again for outwitting the Americans for nearly a year.  Still, many Mexicans despised him for the brutal atrocities committed by his Villistas.  Villa was a paradox—an unpredictable, walking contradiction.  At times, he went berserk and murdered on the slightest whim, other times he could be compassionate.

The Centauro del Norte was quite a womanizer too!  The portly Villa wasn’t handsome, he had adenoids and was a mouth breather, but his legendary status caused the ladies to fight for his attention.  He took love whenever and wherever he chose.  He also seems to have enjoyed holy matrimony.  He had seven legal marriages; the figure could have reached as high as seventy five.  Luz Corral, was recognized by the government as his real wife.  During the 1970’s she was asked by a reporter about these other wives and she graciously replied: “They were his little churches.  I was his cathedral!”

In 1919, Villa raised another army and vowed to defeat his hated enemy, Venustiano Carranza.  In June, he conquered Juarez again but allowed his troops to go on a drunken rampage, pillaging the town while firing shots at Americans across the border in El Paso.   Actually, both Villistas and Carranzistas were shooting into the Texas border town.  The next morning, U.S. troopers from the black military units at Fort Bliss, Texas, stormed across the border.  American artillery blasted a huge water tower above the race track where much of Villa’s army was camped and literally washed the Villistas  away. Pancho Villa’s hung over soldiers were routed.  Villa escaped but his day in the sun was over.  He retired quietly to the mountains of the Sierra Madre, where he had begun. He found solace that Carranza and Obregon became political rivals and the former was driven from the presidency and murdered by one of his own officers in April, 1920. Obregon would ascend to the presidency and he too would die by the gun in 1928.

There is the legend of Pancho Villa’s Lost Treasure! Villa stored a king’s ransom at his hacienda at Canutillo. There were several eyewitnesses to this treasure.  Sometime in the early 1920’s He moved the horde of gold to a secret hiding place in the Sierra Madre—to a site that has never been found.

On Friday, July 20th, 1923, the old warrior was driving home in his Dodge automobile near the town of Parral.  He sat in the front seat with a lady and another friend.  In the backseat were two bodyguards.  As the auto passed a large tree, a pumpkinseed vendor raised his hand and shouted “Viva Villa!”  The general slowed and lifted a hand to salute the vendor.  At that moment gunfire opened up.  The big auto spun out in a cloud of dust.  All the occupants of the car except a bodyguard died in a hail of bullets. Villa was found slumped over the steering wheel with sixteen bullets in his body.

Pancho Villa, who lived by the gun, died the same way.  There were seven gunmen waiting for Villa that day.  One of those, Jesus Salas Barragas, served six months in jail for the crime.  He proudly claimed it wasn’t murder—he had rid the world of a monster!

Since those days, Pancho Villa has been analyzed, romanticized, apologized, lionized and criticized.  “Well then,” you ask, “was Pancho Villa a good guy or bad?”  “The answer my friend,” as they say, “is blowin’ in the wind!” Pancho Villa was the “Good, Bad and the Ugly,” all rolled into one.  Like others of his ilk, Villa was a product of his time and should be judged that way.  Many of his acts were cruel and merciless but he was no better or worse than others in the bloody, turbulent years that rocked Mexico in the early part of the twentieth century. 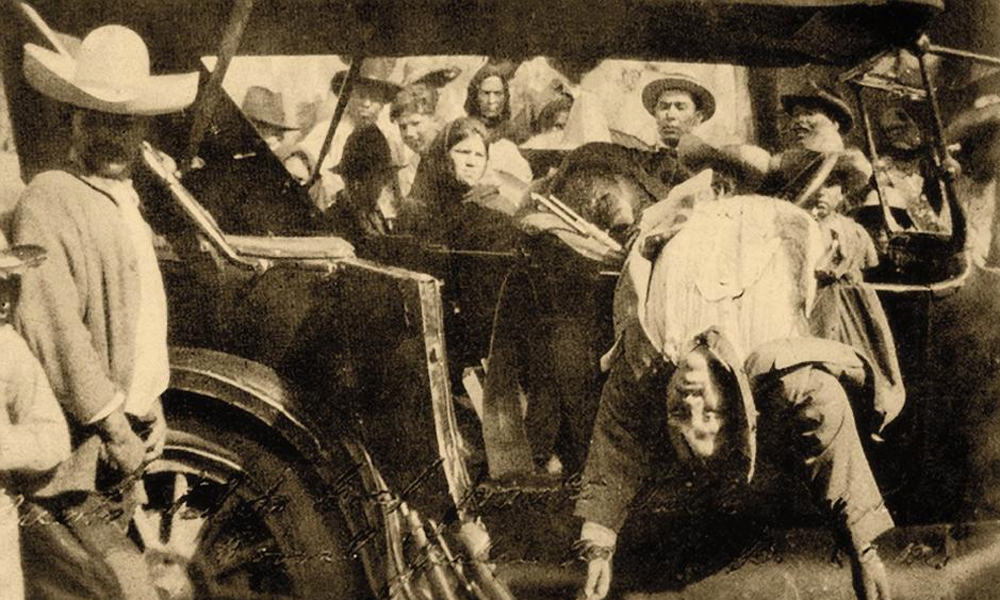