In Wine There Is Truth 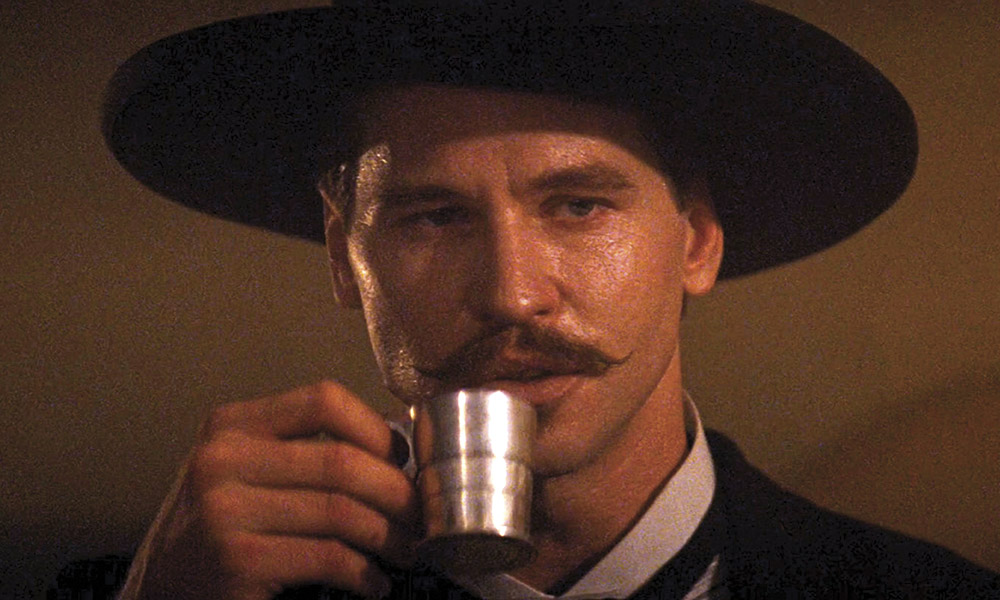 The most celebrated duel in recent Western films wasn’t fought with guns or bowie knives, but words: in 1993’s Tombstone, Val Kilmer’s “Doc” Holliday and Michael Biehn’s John Ringo face off in the Oriental Saloon and exchange slings and arrows in Latin. Here, for those who slept through Latin class, is a translation and analysis of the confrontation.

Doc Holliday has just finished insulting John Ringo by saying that he reminds him of himself. Trying to avoid trouble, Wyatt Earp (Kurt Russell), his hand on a sawed-off swivel shotgun under the faro table, says to Ringo, “He’s drunk.”

Holliday smirks, gulps a slug of whiskey and says, “In vino veritas,” or “In wine there is truth,” an aphorism which supposedly reflected the Romans’ belief that what a man said while drunk was what he truly felt, but would not say under usual circumstances.

Ringo surprises Holliday with an aphorism of his own: “Age quod agis,” or “Do what you do.” Ringo’s precise meaning is unclear, presumably he is challenging Holliday to “Cut the talk and do what you do best.”

Holliday smiles and says, “Credat Judaeus Apella, non ego.” This line is from the Roman poet Horace, specifically from his Satire Five in Satires: Book One. Horace and his Greek friend Heliodorus are visiting a town where the locals try to convince them miracles occur at their sacred shrines. In the Modern Library translation by classical scholar Casper J. Kraemer Jr., the line reads “Apella the Jew may believe this. I don’t.” In other words, “Tell someone else. I ain’t buying it.”

Ringo pats his gun and fires back, “Eventus stultorum magister,” or “Youth is the master of fools.” Again, his meaning is unclear, but he is essentially saying, “You may think you know what you are getting involved with, but your experience hasn’t prepared you for what I have got here,” as he pats his holster.

Holliday smiles again and replies, “In pace requiescat,” literally, “May he rest in peace.” As this was a popular inscription on tombstones, Ringo cannot fail to catch Holliday’s drift and ends the verbal duel by displaying his gun-handling skills.

But screenwriter Kevin Jarre may have intended a second meaning as well. Holliday’s last line is also the last line of Edgar Allan Poe’s “The Cask of Amontillado.” This is one of Poe’s “doppelgänger” stories—“William Wilson” is another—in which two men are presented in a way which suggests that they are separate parts of the same dark soul. In “The Cask of Amontillado,” an Italian nobleman murders a friend who has insulted him, and, in doing so, Poe suggests, kills a part of himself as well.

One of the ingenious undercurrents of Jarre’s script is that Holliday and Ringo are joined together by some mystical bond of torment. (In reality, Ringo suffers from Post-Traumatic Stress Disorder, alcoholism and possible depression; Holliday suffers from tuberculosis and his own struggle with the bottle.)

Recall that Holliday set off the Latin duel by saying that Ringo “Reminds me of…me! No, I’m sure of it, I hate him.” Ringo foresees Holliday’s arrival early in the film when he tells the Cow-boys of the doomed priest’s last words, a quote from the Bible’s Book of Revelation: “Behold a pale horse, and the one that sat upon him was Death….”

The suggestion is that they are the only ones who can put each other out of his  misery. “All right, lunger, let’s do it,” says Ringo, in the oak grove. When Holliday delivers the fatal bullet to Ringo, he urges Ringo (“C’mon, Johnny, c’mon”) to get off one last round himself to return the favor and grant Holliday a quick death.

In any event, Holliday cannot long survive Ringo’s death. In killing him, he was symbolically slain himself.

Allen Barra is the author of Inventing Wyatt Earp: His Life and Many Legends. He writes about sports for The Wall Street Journal and is a contributing writer for American History Magazine and The Daily Beast. His last book, Mickey and Willie: The Parallel Lives of Baseball’s Parallel Lives, was nominated for the Pen Award for Literary Sportswriting.