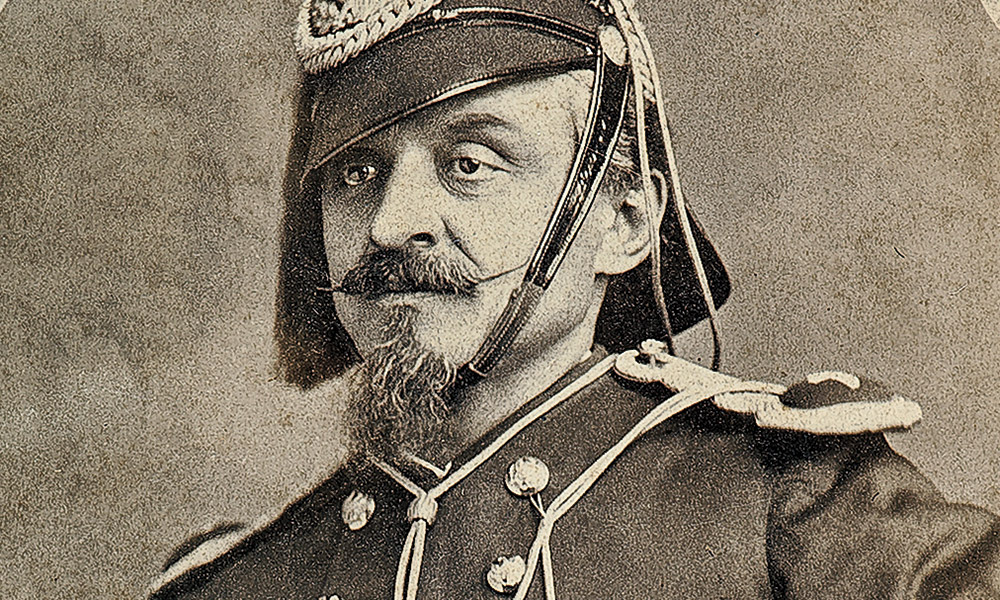 A new officer joined the 7th Cavalry in the summer of 1869, bringing with him a background that even today seems the stuff of fiction,” Charles K. Mills observed in Charles DeRudio.

“In his case, none of the details were fiction, though he embellished some of them. All the elements were there: dashing good looks, European aristocracy, beautiful young women, plots, hairbreadth escapes, assassination attempts, and military service in foreign countries. In the years ahead, he could add to that list: Indians, General Custer, and the battle of the Little Big Horn. His name was Charles Camilius DeRudio.”

Before joining the 7th Cavalry, this renowned revolutionary, born Carlo Camillo Di Rudio in Belluno, Italy, on August 26, 1832, had participated in the failed Orsini conspiracy to assassinate French Emperor Napoleon III in 1858. Spared from the guillotine at the last minute, the Italian expatriate had been condemned to life in prison in French Guiana. After a legendary, if not miraculous, escape from Devil’s Island to England, he sailed to New York City during the Civil War and was commissioned in the Union Army during that conflict.

George Armstrong Custer called DeRudio a “natural conspirator” who was considered the “inferior of every first lieutenant in this Regt.” Yet Custer’s refusal to allow DeRudio to assume command of 7th Cavalry Company E probably saved the soldier’s life.

Left behind during Maj. Marcus Reno’s retreat from the Little Big Horn Valley during the 1876 battle, DeRudio and three others rejoined their comrades on Reno Hill two days later, only after several narrow encounters with the enemy.

Written after the 1890 Wounded Knee Massacre, DeRudio’s account of his escape from death at the Battle of the Little Big Horn may seem too good to be true, yet it is consistent with those told by interpreter Frederic Gerard, scout William Jackson and Pvt. Thomas O’Neil. This is one instance in which the lieutenant, known for telling tall tales, escaped the label of “out and out shyster,” as his company commander, Frederick W. Benteen, called him.

After Little Big Horn, DeRudio’s career seemed routine. As Company E commander,  he was relegated to escort duty during the Nez Perce War of 1877. Promoted to captain of Company H in 1882, he retired from the 7th Cavalry in 1896, having reached the mandatory retirement age of 64. Advanced to the rank of major on the retired list in 1904, he died in Pasadena, California, on November 1, 1910.

Such is the story of DeRudio, the alien horseman who was “fond of recounting his adventures around the campfires and in the parlors,” biographer J.C. Ladenheim notes. “He had so many colorful stories, gathered from his experiences on both sides of the Atlantic.”