Titans of the West 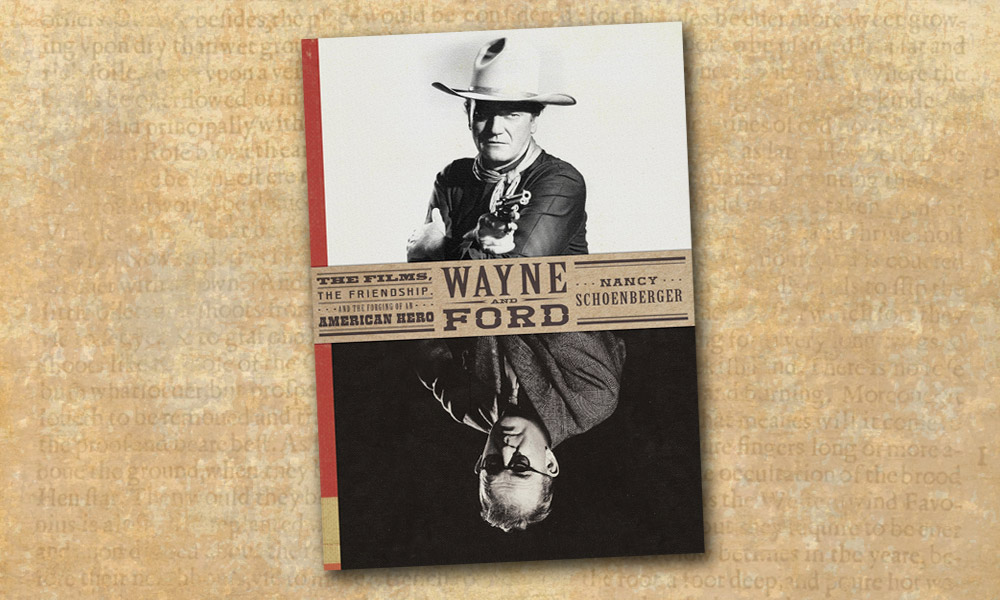 For fans of Western cinema, 2018 is an anniversary year of great importance as the 80th anniversary of John Ford directing his first John Wayne film in Monument Valley. That film, Stagecoach, was an ensemble classic that changed movie history and the Western genre forever. And, Nancy Schoenberger’s Wayne and Ford: The Films, the Friendship and the Forging of an American Hero (Nan A. Talese, $27.95), released in late 2017, may change forever how cinemaphiles understand the eternally entwined director and leading
man, and their cultural contributions to America and the world. The College of William and Mary English and creative writing professor took a fresh approach to chronicling the lives of the men and their parallel contributions to the American mythic hero. Her approach is academic, personal and in many ways, an homage to the Western. “Why
do I love Westerns?” she asks in her prologue. “Maybe I like to see men trying to do the right thing, often against tremendous odds and often for the protection of women and children, who are frequently as tough and feisty as the men who do the actual fighting.”

Unlike the most comprehensive biographies by Scott Eyman of Ford and Wayne, Schoenberger does not attempt to write a lengthy life-history of the two men. Rather, her extensive research is distilled into an unburnished reassessment of two flawed men who shared a passion for telling heroic tales about flawed characters trying to make the right decisions with dignity during troubled times. I especially like her assessment of Wayne’s interpretation of the lead role in The Searchers:  “Ethan Edwards, like Dunson and most heroes of American action movies of the last century, is motivated by an almost blind need to protect something—a woman, a family, children, a place—even if he has no apparent claim to it.”

Some readers may find Schoenberger’s Wayne and Ford  shocking for her decision to review Ford’s possible closeted homosexuality and troubled marriage, and Wayne’s multiple marriages, families and affairs. In 2018, as America is in the midst of a national discussion of the roles of men and women—including Hollywood’s complex history of sexuality, sexual abuse and predatory behavior on and off the set—the author’s balanced and honest discussion of the two cinema heroes allows her conclusions about their contributions   to Western cinema to be considered nostalgically—and even sociologically positive for American culture.

What is the buzz in Western books?

Let me tell you.

If you haven’t been paying attention, e-books and audiobooks are dominating Internet sales, but your local bookstore, especially specialty shops are meeting Western readers’ needs the old-fashioned way—via customer service. For Western books, Guidon is my go-to shop in Scottsdale (Guidon.com) and Hooked on Books (HookedOnBooksCo.com) in Colorado Springs. You have your favorites, don’t forget them. Shop locally, and keep the local bookstore alive and thriving.

Cinema and television producers are still adapting books for mass-consumption, but if Hostiles is the best of the year (Saving Private Ryan of the West? Really? Only if they got the date and history right on the movie can you begin that argument…but they did not.) I will stick with the Netflix limited series Godless, my favorite Western series of the past year. Or go back and watch my favorite adaptations of Western novels and short stories: Stagecoach, Shane, The Searchers, 3:10 to Yuma, The Man Who Shot Liberty Valance, True Grit and Monte Walsh.

How about Robert M. Utley? Eighty-nine years young and he just published his 22nd book, The Commanders: Civil War Generals Who Shaped the American West (University of Oklahoma Press, $29.95). It’s a must-read for anyone who loves the Old West.

Or Jeb Rosebrook (yes, my father), who at 82 going on 83, has two books coming out this spring: Edge of Nowhere, cowritten with Linell Jeppsen, the first volume in the Jack Ballard series (adapted from his original screenplay originally feted for Steve McQueen and Sam Peckinpah) for Wolfpack Publishing, and his long-anticipated memoir from BearManor Media, Junior Bonner: The Making of a Classic with Steve McQueen and Sam Peckinpah in the Summer of 1971.

Or John Boessenecker? His follow-up to his biography of Frank Hamer will be out in October: Shotguns and Stagecoaches: The Brave Men Who Rode for Wells Fargo in the Wild West (John Dunne, $29.99). It looks like one of the top Western history books of the year. And the perfect history to read while watching reruns of Tales of Wells Fargo on the Western Channel.