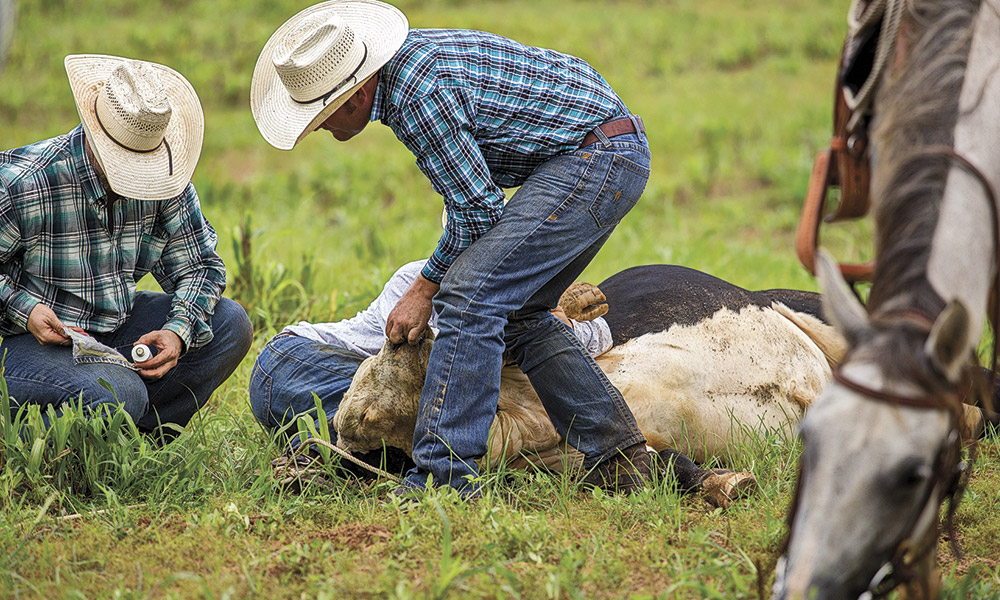 This April 26, Chris “Booger” Brown, Cody Harris and Bubba Thompson saddle up for their third season of INSP’s The Cowboy Way—Alabama, the most entertaining and least contrived of “reality shows,” which follows three hard working cowboy ranchers and their families, an indirect outgrowth of a dating show on CMT.

Back in 2011, Bubba remembers, “Cody was on Sweet Home Alabama, Season One, and when they got to Season Three, they needed another bachelor, so Cody told them about me. We became really good friends with Producer Andrew Glassman. He liked our lifestyle and was always saying, ‘We should do a show about cowboys, how you live your life and how y’all survive.’”

The series was unsuccessfully shopped from network to network until INSP.  “We’re 95-percent acquired programming. The common theme is people who live simple, honest, rugged lifestyles, whether that’s Gunsmoke or Little House on the Prairie. These guys truly represent the values of INSP,” says Craig Miller, vice president of INSP Original Programming.

He adds, “We refer to it as ‘Western adjacent.’ It doesn’t [have] to be about cowboys, but it’s a concept that someone who likes Westerns would also like.”

You won’t find bachelors on the show now. Cody and Misty were newlyweds in the pilot, and by the end of Season One, they had a son. Bubba and Kaley married and had a daughter. Booger, after a string of romantic disappointments, fell for Jaclyn, a widowed pharmacist. He married her and became a devoted stepdad to her son, in Season Two. The natural beauty and sweetness of the brides could well trigger a bachelor stampede to Alabama.

“We were all working for a rancher,” Bubba says, of how the three started their own ranch, “and we didn’t like how everything was going, so we just stopped working for him, kind of went out on faith. That’s how the name ‘Faith Cattle Company’ came about.”

In addition to cattle ranching, each has his own business—Bubba is a fine carpenter and builder, Booger is a master horse trainer and Cody, a champion calf roper, runs rodeos and is a heavy equipment operator.

Things happen in The Cowboy Way that don’t happen on other reality shows. Local law officers ask the men to round up stray cattle on a high school baseball field. Booger teaches Misty how to tell if cattle are pregnant, with an in-up-to-the-shoulder gynecological exam.

Some episodes are surprisingly intimate. Booger had to sell much of the ranch that his grandfather had built, to pay off debts. “That was one of the toughest times of my life,” Booger says. “I was kind of embarrassed to put it all on national TV, and here I am, getting choked up again.”

“After that episode aired,” Bubba says, “we got hundreds of e-mails saying, ‘Hey, don’t sell that land! We want to help! Is there anything we can do?’”

Booger adds, “That really was touching, that people would reach out. And good Lord willing, maybe one day I’ll get the land back.”

Taking time out of the day-to-day ranching schedule to shoot a TV show is not something every rancher would be willing to do. “We make life very difficult for them as cowboys for 30 to 40 days, every time we go down to shoot,” Miller admits.

Still, they’re happy to do it. Booger says, “I think it’s an honor just to show our way of life, that’s being lost throughout the country.”

Bubba agrees: “We like people to see the process it takes for a man to be able to put a steak on another man’s plate.”

But as Cody points out, their feelings run deeper than that. “We’re so happy to be on INSP, this network that doesn’t make you hide your faith. We’re so blessed.”

What’s the best part of becoming celebrities? They have different anecdotes, but the same answer: the young, often very ill children who are thrilled to meet them. Each man teared up in the telling.

“The cowboy way,” Cody says. “It ain’t being a cowboy. It ain’t putting on a hat or boots or spurs.  It’s how you treat people. Bible says you do unto others as you’d have ’em do unto you.”

Bubba agrees: “We call it neighboring; we do it every day, trying to help everybody out. Someone may have a piece of equipment I need, and he may need something built that I can do.”

Although they take great pride in their work, they have mixed feeling about their children following in their footsteps.  “I think every child should be brought up either bottle-feeding a calf or cleaning a horse stall. It taught me a level of discipline that you can’t buy. You can’t learn behind an Xbox,” Cody says. “I don’t know if he’ll want to do it forever, but he’s gonna do it while he’s under my roof.”

Bubba offered a different take: “If she wants to do it, that’s fine. But I prefer her to make money with her brain than her back, like her daddy has always had to do.”

The success of the series guarantees that INSP will be presenting more Western-adjacent shows; one is in the works about turquoise miners, and The Cowboy Way—Alabama title suggests other states may demand equal time.