Clash of the Mad Madams 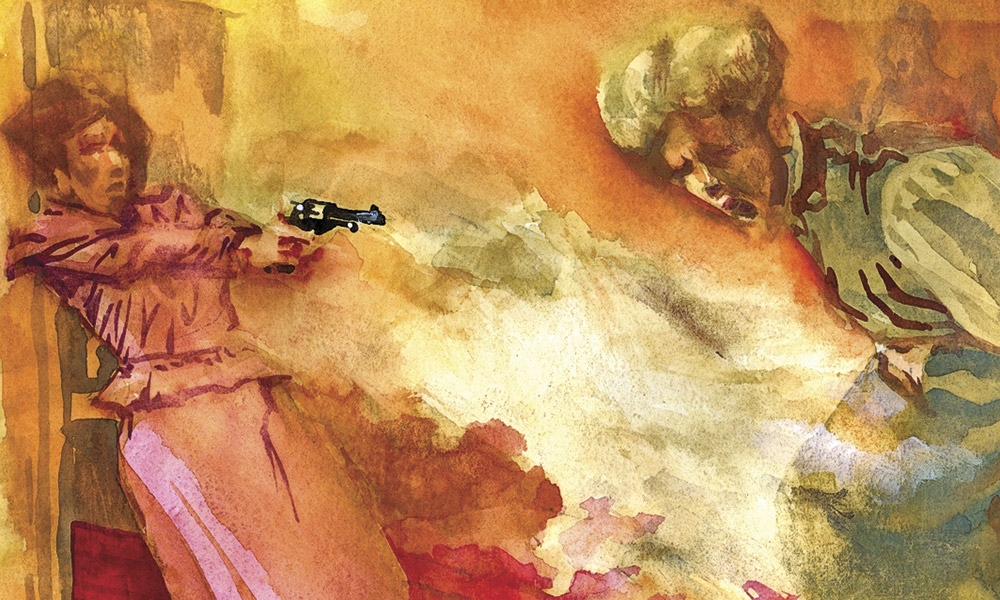 Bessie’s also drunk. Sashaying through the brothel parlor, the angry soiled dove swears at the customers, telling them how foolish they are for shopping at “Fat Alice’s Belly Bazaar.” At the front door, Bessie informs everyone within hearing that the “prime cut will soon be found across the street.”

After hearing Bessie’s tale of woe, Etta Clark readily agrees to hire the raving beauty. With gainful employment assured, Bessie marches back across Utah Street to retrieve her belongings. As Bessie packs her trunk in her room, Madam Alice Abbott comes in and demands to know what’s going on. Hearing Bessie’s avowed defection, Alice flies into a rage and tries to slap her, but Bessie ducks the blow and flees the premises.

Alice first sends two of her other girls to retrieve her errant prostitute, but when they return empty-handed, she crosses the street and climbs onto Etta’s porch. Banging on the front door, Alice demands to be
let in.

“Don’t let her get me!” pleads Bessie from behind Etta. “She’ll hurt me if she gets ahold of me. She’ll beat me to death!”

“It doesn’t make a damned bit of difference whether she wants to see me or not,” bellows Alice, as she flings her hefty body against the door, sending Etta staggering backwards.

Through the open door, Alice starts for Bessie. Etta takes a swing at her rival with the gas lighter. Deflecting the blow, Alice says, “I owe you this anyhow” and punches Etta in the face, sending the madam sprawling into her bedroom.

Alice grabs the hysterical Bessie by the wrist and begins dragging her out the door. Screaming and kicking, Bessie breaks free and runs back inside.

Retrieving a bone-handled, .44 caliber Iver-Johnson “Bulldog” revolver from her dresser drawer, Etta reenters the parlor. “Miss Alice,” says Etta, aiming the piece directly at her rival, “I want you to leave my house.”

“I’ll leave your house,” jeers Alice, as she advances on her smaller foe.

Alice staggers out of the house and down the porch steps, before she collapses in the street. Etta steps onto the porch and fires again, but she misses.

Three of Alice’s girls rush across the street to carry their employer back inside her house. The fight is over.

Alice Abbott kept a photo album of her days as a madam of her brothel in El Paso, Texas (see interior of her brothel at left). On the first page of the album, Alice staked the claim as the “Best Housekeeper . . . U.S.A.” The fiery and hefty madam reportedly tipped the scales at 230 pounds.

Arriving in El Paso in 1880 from Louisville, Kentucky, Abbott was the first madam to build her brothel on South Utah Street, number 19. When the petite French-Canadian Etta Clark set up shop nearby, the two madams became friends…and then enemies.

The photo above of Etta Clark was crossed out by Alice Abbott, but the fact that the photo was in Alice’s album suggests they were friends at an earlier date. Evidently, Clark was an equal opportunity madam.

When Clark appeared in court for shooting Abbott, her weapons were admitted into evidence. Her gas lighter (top inset) still has the “Exhibit A” tag attached, while her .44 caliber revolver (bottom inset) has “Exhibit B” scratched into its frame in two places. 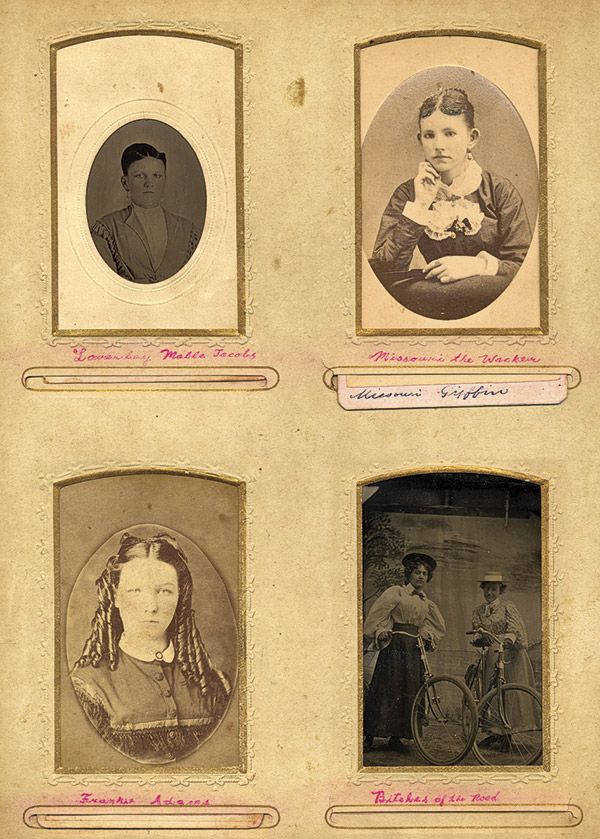 Madam Alice Abbott also put the letter “A” surrounded by a heart on numerous photos in her album, possibly denoting customers and girls who were extra special to her (some believe the “brand” suggests lesbian status). 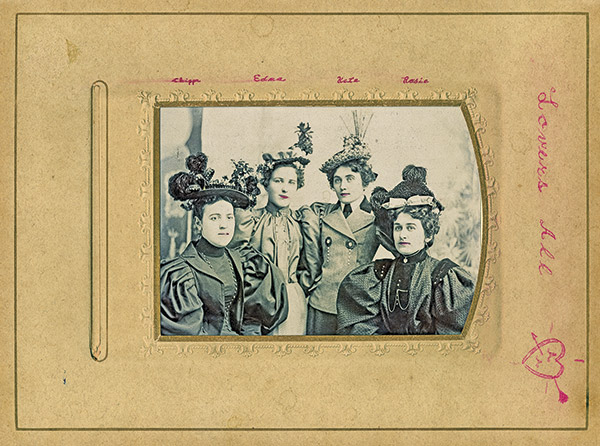 Chippa, Edna, Kate, and Rosie earned the sweet description “Lovers All” with their heart (above), while her soiled doves earned descriptions that ranged from “Loverboy Mable Jacobs” and “Bitches of the Road” to “Missouri the Wacker” and “Frankie Adams” who apparently hadn’t yet earned her nickname.

The arrival of the Southern Pacific, Texas and Pacific and the Atchison, Topeka and Santa Fe Railroads in El Paso, Texas, in 1881 created a tempting valley for settlers to ply their trade and benefit from the Mexican Free Trade zone. The border town’s “Tenderloin District” had major brothel locations by 1886 and, by 1890, more than 600 soiled doves occupied the city blocks known as the “Utah Street Reservation.”  The potential for clientele shot up from 736 residents in 1880 to 10,338 by 1890.

The summoned Dr. A.L. Justice determined the bullet had  penetrated to the right of Alice Abbott’s pubic arch and passed through her body. No vital organs were hit.

The next day’s El Paso Herald mistakenly told readers that Alice had been shot in the “public arch.” Long after she recovered, Alice was often asked, “How’s your public arch feel today?” The phrase later became a part of Western folklore.

Etta Clark turned herself in to the police and was charged with attempted first-degree murder. On May 13, a jury found Etta not guilty on grounds of self-defense.

Incredibly, after the dust had settled and the wounds healed, Alice Abbott sweet-talked Bessie Colvin into returning to work at her brothel.

Recommended: The Gentleman’s Club: The Story of Prostitution in El Paso by H. Gordon Frost, published by Mangan Books.